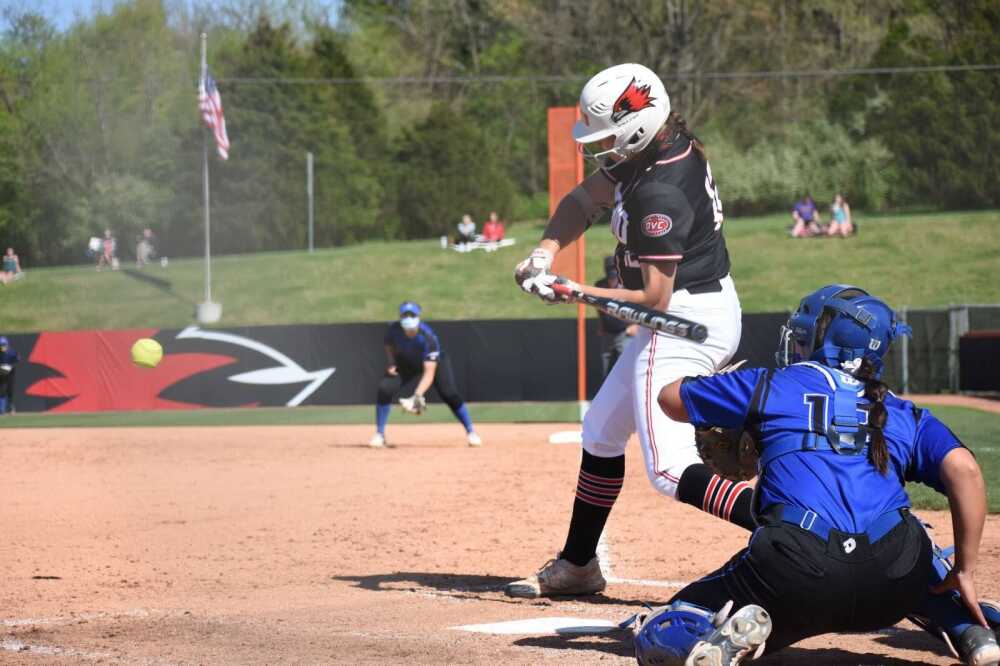 Freshman infielder Katie Dreiling takes a swing during Southeast's 2-0 win over SLU on April 14 at the Southeast Softball Complex in Cape Girardeau.
Photo by Caleb Burris

For any sports team, having a player to rely on for success is essential. For Southeast’s softball team, a cornerstone of the team's offense has been freshman designated hitter Katie Dreiling’s success at the plate.

Dreiling, who is Southeast’s designated player, leads the softball team with a .390 batting average.

Dreiling felt the pressure associated with being a freshman early in the season, but slowly grew into her role.

“Starting off the season, I did feel a little stressed because I had to prove myself,” Dreiling said. “As time has gone on though, I think the pressure kind of went away because I started having more confidence in myself as the season went on.”

Dreiling uses opportunities she has at practice and during pregame to improve her batting skills. While she is taking extra swings, she also watches the opponent's pitcher to see how she throws.

Southeast coach Mark Redburn recognizes the work Dreiling has put in at practice.

“As a left-handed hitter, she has a really good, pure swing,” Coach Redburn says. “She comes in almost every day before practice on her own to swing.”

Dreiling’s success at the plate has led to pitchers from opposing teams attempting to find out how to stop her on offense.

“They know she’s an aggressive hitter so they know she’s going to swing early in the count,” Redburn said. “They weren’t quite sure how to approach her, but I think she’s getting to where she understands what it’s like to have to go up there and face a team that may know a little bit about her at the plate.”

Dreiling’s approach in the batter’s box remains the same as she begins to know what the pitcher’s pattern is.

“So, some games we’ll know if the pitcher throws more inside or outside,” Dreiling says. “And with that, you’ll know whether to look first pitch or wait for another.”

With Dreiling having one appearance for Southeast on the mound, Redburn tries to balance practice between her hitting and pitching. When it comes to practices, Dreiling looks to get the time she needs in the bullpen to develop her pitching skills.

Although Redburn is wanting to develop her pitching, said he knows with Dreiling putting more time into her hitting, she will continue to succeed.

“As a coach, I have to try to evaluate what does it seem is her strength right now,” Redburn said. “We’re trying to find out when we can get some pitching in, but at the same time really be able to make the most of her on offense, which she has done a great job.”

Dreiling, along with the rest of the Southeast softball team, are back in action on April 24 when they travel to take on the Tennessee State Tigers at 1 p.m.