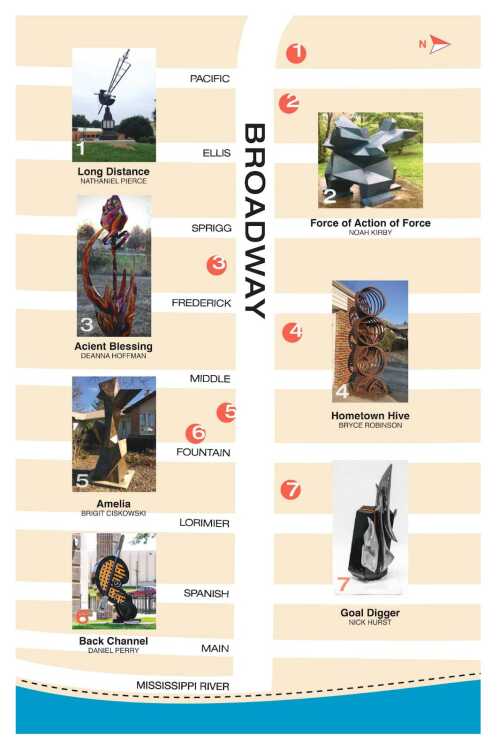 Graphic created by Wright Group and submitted by Ashley Sexton

“The urban definition of goal digger, is a person who surrounds themselves with the success that they desire. With this sculpture, I reflect how an individual can constantly be obsessed with trying to improve themselves.”

Thus writes sculptor Nick Hurst in his artist statement for his 2021 entry in the Outdoor Sculpture Exhibition with his piece "Goal Digger."

The Arts Council of Southeast Missouri has been filling the community with art for many years. One of the ways they are doing this is through their annual Outdoor Sculpture Exhibition.

These sculptures have been incorporated in the community since 2013. This year, the Outdoor Sculpture Exhibition for Cape Girardeau has released its newest sculpture entries for the public to view in April.

Hurst is a Spring 2020 graduate from Southeast and graduated with a BFA specialized in sculpture. From his classes at SEMO, he has had other sculptures placed around town, but this is his first entry in exhibition.

Located down Broadway Street near Spanish Street, Hurst’s sculpture is placed tall with its different steel tones and accenting colors.

Hurst said his inspiration for this piece grew from simply starting with paper and pencil.

“I'm not even looking at anything when I do it, I just start to draw shapes and pull something out,” Hurst said.

He tries to keep the sculpture in mind the whole time as he continues to creatively draw out his plan.

“I'm thinking about how to make it better than the last and how to attract the eye,” Hurst said. “I kind of let my drawings tell the story to me, and then I tell everyone my story that I believe that this sculpture represents, and I like to share a part of the way I think.”

Hurst said participating in the exhibition left him with nothing but good things to say.

“It's very rewarding to myself, to be able to create what I want to do and be happy doing it and then also to put it out there for everyone to see,” Hurst said.

While most artists in this show submit work they have already made, Hurst specifically made his piece “Goal Digger” for the show. He worked on this piece starting in December 2020 until a few weeks before the show began in April.

“There is a short monolith tilted to its side, not on its side, but it is at a 45-degree angle tilted over with a splice going straight down,” Hurst said. “On the inside, there is a reflective gold. On the other side of it, there's a bunch of organic shapes that I created that come out and at a distance that almost looks like flames or a kind of physical spirit, I guess.”

While Sexton has never participated in the show herself, she happened to be the first student to have their art displayed at the Broadway Pharmacy corner in town when she attended Southeast. She then led the way for other students to place their artwork there.

Sexton said Chris Wubbena, area head of sculpture at Southeast, instigated the show when she worked on her undergrad.

“I showed an interest in making large-scale metal sculptures, and he's really good about seeing in students’ things they want to do and creating opportunities for them to kind of get involved,” Sexton said. “When that show first started, they had a student's spot basically on the committee, and he invited me to fill that spot, so I got to actually see the show kind of behind-the-scenes from beginning to end when it first started.”

The main criteria the artist must follow is that their work can live outside for a year without maintenance.

Many artists tend to use different types of metal because these are more durable for staying outside for long periods of time, but there have been some treated wood entries. The sculptures are displayed for a whole year.

The submissions start coming in around late November with a call out nationwide, where they invite the artist to submit pictures of their current work, or they propose a new piece.

“We get all of those entries together, and then in early December, we meet with our selected juror for the year, who's actually selected by the outdoor or the public art committee, which is a city-wide committee,” Sexton said.

When making the seven selections, the juror has the final say, but they also open up to conversation with the other members for the deciding pieces.

“There's usually not a theme necessarily, but your juror is really going to impact the works that are selected, so you'll kind of see something that connects them all together,” Sexton said.

Andrew Arvanetes worked with the Outdoor Sculpture Exhibition to be this year’s juror for the show. Sexton said this year, the pieces all were metal but the pieces that were selected by the juror were very diverse. There were 20 submissions from this year and only seven selected that are out for display.

Sexton said the main purpose of this exhibition is to get the public involved in arts within their community.

“So many people think that art is something that was in a museum or in a gallery, and it's something that you have to be trained to interact with or train to look at,” Sexton said. “That's completely untrue. Public art does a really good job of kind of giving people a point of access to be able to interact with it. So, for us, it's that we want to get as many people excited about art as possible.”

The call for next year’s entries will begin around mid-September. For more information about the current show and how to participate, check out their website at capearts.org/odse.