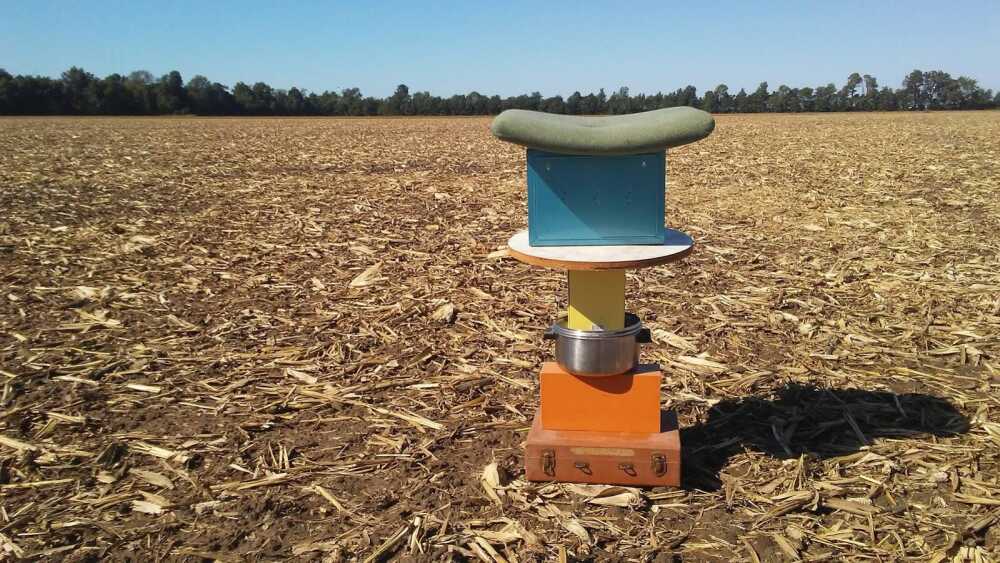 “Space Invaders?1,” Shawn Guiling’s sculpture made of found objects photographed in the Southeast Missouri cornfield it was originally assembled in.
Photo by Shawn Guiling

“Space Invaders?,” an exhibition of sculptural works and photography by Shawn Guiling, “explores the psychological role locations and objects play in one’s life with simple materials assembled against the backdrop of fields and the horizon,” according to a press release. The work is a featured exhibit now on display at Catapult Creative House until May 7.

Guiling, an instructor of psychology at Southeast, is currently pursuing a Bachelor of Fine Arts degree with an emphasis in sculpture at the university. His artwork focuses on the relationship found objects have to their space and surroundings once they are utilized and repurposed.

“I have always liked to work with found materials, just kind of stuff that some people might call junk, things that once had purpose, and I’m using them for something else to repurpose them,” Guiling said.

“Space Invaders?” began as a response to the COVID-19 pandemic. Guiling’s inspiration draws from the spaces of farmland which provided peace and safety in his childhood in Southeast Missouri.

“I sort of paired the large, broad space that I enjoy with the sculptures that I make out of this discarded stuff, then just started building them in different places and realized that it was kind of saying something about what belongs and what doesn’t belong,” Guiling said.

The exhibition displays three sculptures made of found materials surrounded by dry corn stalks which are framed with color-coordinating duct tape. He photographed the sculptures in the fields where he originally assembled them.

Joshua Newth, assistant professor and foundations coordinator in the Department of Art and Design, and Joni Hand, gallery coordinator, assisted Guiling with planning this exhibition.

“I’ve had the pleasure of seeing Shawn Guiling’s work develop over the last three of four years,” Newth said. “I’ve seen his work in a variety of exhibitions throughout the community. This, for me, is a culmination of the sculptural elements as three-dimensional and his 2D interests. The bringing together of photography and sculpture has really kind of worked nicely not only for his body of work but the space itself.”

“This exhibition makes me think of the things I allow into my space,” Welter said. “I still have railroad spikes that I found when I was a child. They may not serve any purpose, but they are important to me.”

“Space Invaders?” is part of the Student Artist of the Month exhibition series. It began April 5 and ends May 7. It is free and open to the public between 8 a.m. and 4 p.m. Monday through Saturday. An exhibition reception will be held during First Friday on May 7 from 5-9 p.m. Catapult Creative House is located at 612 Broadway in Cape Girardeau.