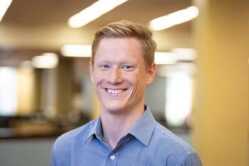 After nearly 10 years of working on his manuscript, Assistant Professor of communication studies Kevin Musgrave sent it off to Michigan State University Press to be peer reviewed. Musgrave said some of the inspiration for his work in ōPersons of the Market: Rhetorics of Conservatism, Corporate Personhood and Economic Theologyö came from personal interests.

Musgrave stated the book examines how ōthe arguments of conservatism, corporate personhood, economics, and theology are intersected to argue against current idealized notions of personhood in our society.ö

Musgrave earned his BachelorÆs degree in sociology, completed his MasterÆs degree in political communication and topped off his academic career with a Doctorate in rhetoric. This is MusgraveÆs second year teaching rhetoric at SoutheastÆs College of Humanities and Social Sciences.

Musgrave said most of his research topics are ōhappenstance,ö but the economic and conservatism reasonings came from a ōpersonal place of interest.ö

ōI grew up in a fairly evangelical Christian conservative home in Champaign, in central Illinois. I no longer ascribe to either of those worldviews or labels,ö Musgrave said. ōI would no longer consider myself a conservative by any means, probably quite the opposite. I no longer consider myself an evangelical Christian, also probably quite the opposite.ö

He said he felt as though he needed to understand the topic better on his own terms to communicate and have meaningful conversations with his family.

Learning the history, how it's changed and where we are today were very important to form a base level of understanding between him and his family, Musgrave said.

Throughout his writing process, historical events have happened which required Musgrave to rewrite and reconsider things in his dissertation.

ōI thought I knew what it was going to be about, and then it changed entirely to adjust pace and adjust course because of what was happening with the White House and with Trump-ism and with the riots on the Capitol,ö Musgrave said. ōI was writing my last chapter of the book, and I was even having to change it day by day with the manuscript I submitted. So, the last chapter in the book is about corporate personhood Donald Trump and Trumpers, basically.ö

Musgrave said if the book manuscript gets published, it would most likely not be available until 2022. Local resources such as Kent Library will have access to it, and it will also be available to purchase on Amazon.