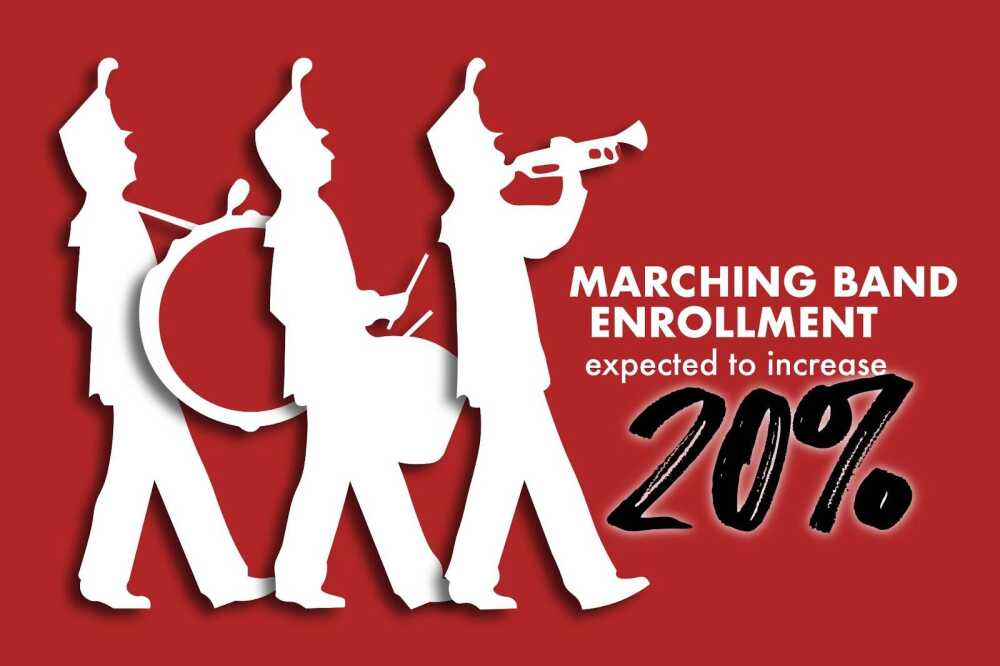 With their last season being limited due to the virus in the fall 2020 semester, the Southeast Marching band is determined to grow their student roster as they prepare for next semester.

According to the Southeast Marching Band’s associate professor of horn and assistant director of bands Nicholas Kenney, registration is on pace to increase by 20% this year. The total number of students enrolled in the marching band ranges around 120 each year, including the 46 students who audition for Show Band.

With the expected increase in enrollment, Kenney is expecting great things to come this year for the band and he believes students can get strong benefits from joining.

“I think that being involved and being an active participant in campus life is good for students,” Kenney said. “I feel like they're more invested in the university when they're being a part of something like the marching band, and generally it’s just a lot of fun.”

Kenney has worked with the university for eight years and has overseen the band with their progress this past year. The band is in the process of hiring a new director of bands.

Kenney said this new hire will help change the trajectory of the marching band’s future. This will include the events they might participate in and other outside university activities they could travel to.

Like many organizations on campus, Kenney said COVID-19 had an unexpected impact on the marching band and their expected enrollment.

“Funny enough, the enrollment was on pace last year to be up to 7%,” Kenney said. “Last year, a few weeks before Aug. 1, I had 135 signed up. That was new kids and returning kids, and by the time early week started two and a half weeks later, people had pulled out for COVID reasons and such to back down to the 120 mark.”

Kenney said this loss created some frustrations, but he developed the band even under these circumstances.

“I think that, you know, if it had been a normal year, we would have stayed around 130 to 135 to have that little bit of growth,” Kenney said.

Even with the effects of COVID-19, Kenney said a positive impact came from the pandemic for the marching band, and he is seeing a “tremendous” amount of growth.

“First, I think people are wanting to get back to normal,” Kenney said. “Some people missed marching band in high school, and they want to do it again. Some people that were here that pulled out last year for COVID reasons decided, ‘Hey, I'm going to go do that again, because you know I missed my opportunity last year.’ So, we got kids a little bit of retention, coming back.”

The band is also recruiting newer students. With his work in admissions, he said he’s able to reach more students than before. Kenney said 100 students have already signed up for the marching band class during registration, 49 students have filled out a marching band application, and approximately 20 to 30 people have shown an interest in auditioning for the band.

“I'm really going to work hard to make sure to hit that 20%,” Kenney said.

When football season normally approaches, the marching band is in the stands to perform, ready for halftime; this year, things were different. The marching band normally performs in the fall, but with the changing of sports schedules due to COVID-19, they had to make some adjustments.

Kenney decided to only use the show band, which has approximately 46 students, for sporting events because of safety regulations. The show band normally plays for the basketball games, and the marching band plays for the football games.

Marching band is like any other class at Southeast. The band meets three times per week from 4 to 6 p.m., has a set plan each day for rehearsals, and students receive a grade. Kenney said they try not to do the same things for the full two-hour rehearsal.

“Marching band is a very segmented activity — there's a lot of different things you have to do, and then you have to put it all together,” Kenney said. “There’s a part of the time where we might be rehearsing only marching, we might be rehearsing only music, or we might even break down into sections. Then we bring it all back together generally for at least a quarter or maybe more of the rehearsal, depending on what we need.”

The band participates in events such as football games and half-time shows, as well as the homecoming parade and pep rally, and they also do exhibition shows for local high school marching band competitions or marching festivals.

Rachel Richardson, junior mellophone player, is a member of the marching band. She has been involved with the marching band for three years and recently took on a new role as a student assistant for the band.

Richardson said this new position has been a learning experience for her.

“As an education major, it gave me the opportunity to be on the teaching side of things instead of the performance side of things,” Richardson said.

Richardson said many people were disappointed at first when COVID-19 hit students in the marching band last year.

“We were kind of like, ‘What is the marching band going to do?,” Richardson said. “But we took it as an opportunity to just grow the band and better ourselves, especially with our marching visual and music-wise. I think we really just improved our sound in the standards of our marching band overall, so that we can come back better next year.”

As a student in the marching band, Richardson said one of the greatest benefits is the amount of people one can meet and the friendships students can create.

“My freshman year, I moved in a week early, and at that point, the only people that I knew were my roommates and her friend,” Richardson said. “Then we went to marching band rehearsal, and it was like, immediately, I just had probably 20 best friends.”

Richardson said three years later, she is still great friends with those people.

Kenney said the marching band normally comprised 50/50 non-majors and music majors, and he thinks this is another aspect that will bring more interested students to the band.

“I've seen more non-majors this year coming — I think they want to go into school and study something, but they missed out on the marching band experience, and so they're interested in making sure they get more of that experience,” Kenney said.

Richardson said this combination also brings a stronger connection to the main campus and River Campus.

“As a music major, once I'm done with my gen eds, I’m relatively isolated to River Campus at that point,” Richardson said. “So, by meeting main campus majors through the marching band, I feel more connected to the main campus.”

Kenney said the band is hopeful to be back to normal with their performances in the fall season.

For more information about the marching band, visit their website at semo.edu/marchingband/ or contact Kenney at nkenney@semo.edu.