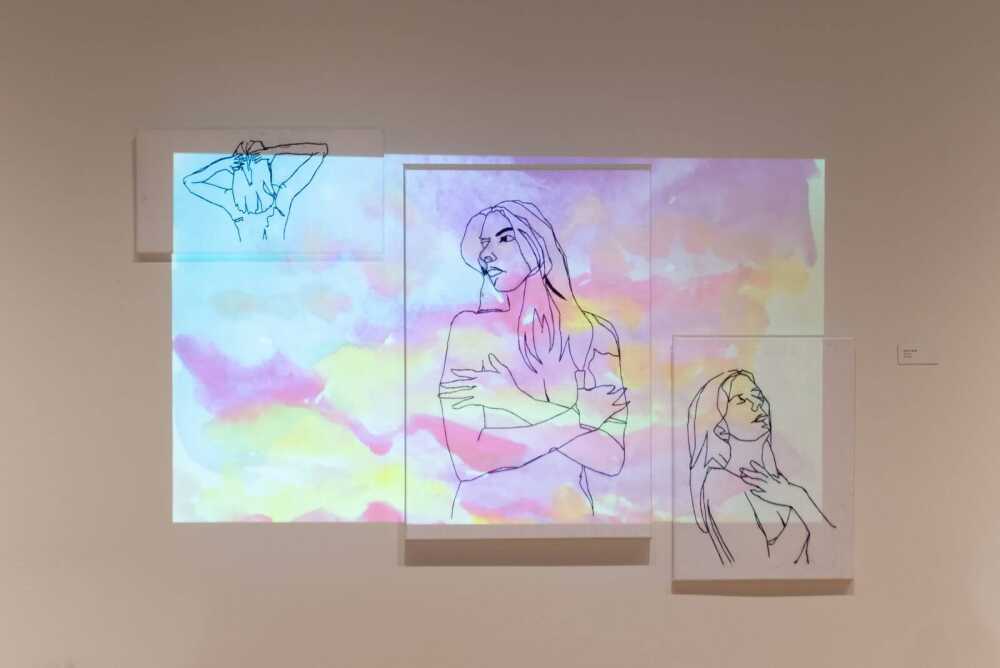 Artwork from a variety of mediums created by Southeast BFA students is on exhibit at the River Campus Seminary Hall throughout April and May.
Photo by Anna Estes

Nicholas Mulholland’s love for graphic design began in middle school when he was briefly introduced to Adobe Photoshop and Illustrator. He enjoys the intricate details made possible by the technology-driven medium, which creates a deeper level of detail. Fast-forward 10 years years later, and the BFA major creates his art using graphic design. Some of his senior projects are on display with other graduating BFA students at the Crisp Museum from April 19-30 and May 3-14.

“I always found it really interesting that I could create seemingly complex things with very little manual labor, and there were so many ways to optimize creation, which is a very nerdy, very technical way of thinking of how to create,” Mulholland said. “But, I did like that I could create something in the perfect technical way. It has a level of specificity that I don’t think any other form of art has.”

Mulholland said during his time in the art program at Southeast, his skills have increased as an artist.

The fine-tuned skills culminated by the students of the Bachelor of Fine Arts (BFA) Program are on display in Seminary Hall at River Campus from April 19-30 and May 3-14. The exhibit features a variety of art forms ranging from graphic design and ceramics to paintings and sculptures.

Art BFA major and Clay Club President Bella Szabo is completing her degree with an emphasis in ceramics. Szabo reflected on the years of hard work she put into her craft under instruction by the professors at Southeast.

“It’s very intense,” Szabo said. “As a BFA, they required us to be very well-rounded, so I’ve taken every single art class that they have, which I really appreciate, because I have so many more skills now than I ever dreamt I could. It’s a lot to squeeze into four years, especially with a second major, but I managed it.”

Szabo said she enjoys creating functional ceramic pieces such as bowls and jugs. She inserts her own personal touch into projects by incorporating sculpting and shapes, such as her miniature puzzle jug featured in the exhibit. Szabo plans on continuing her education after graduating from Southeast.

“I plan on doing internships at galleries here in town,” Szabo said. “I’m going to stay in Cape Girardeau for a year and try to get as much experience as I can. I have a part-time position lined up at the Arts Council teaching art classes for kids, and I would eventually like to work as an exhibitionist coordinator in a gallery … and eventually move on to get my master’s at a grad school.”

Mulholland said he recognizes the importance of the art program putting students' artwork on display.

“I think it is invaluable. SEMO doesn’t do everything right all the time, but in this regard, that's top shelf,” Mulholland said. “I know so many very expensive colleges who give art students way less opportunities, and the fact that SEMO is affordable and is accessible, especially to people who are local to the area, that is an amazing opportunity.”

After graduating, Mulholland said he will begin his employment with The Wright Group, an advertising agency based in Cape Girardeau.

The BFA Senior Art Exhibit is free for the public to attend. An opening ceremony will take place April 30 from 4 to 7 p.m. For more information, visit the Southeast website.