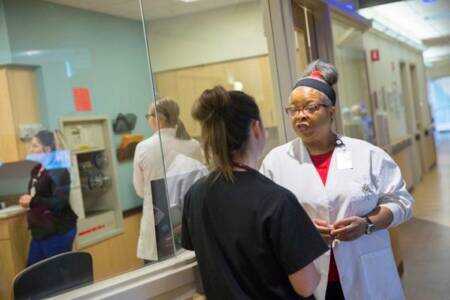 “Most Black students don’t make it in nursing.”

Vera Campbell-Jones said she’ll never forget when a nursing instructor said this to her during her first year as an undergraduate student at Southeast in 1977.

At the time, Campbell-Jones was one of only two Black students in the nursing program at Southeast, but her professor’s remark only made her want to work harder. She graduated from Southeast with her Bachelor of Science in Nursing in 1981.

Fast-forward to 2021. Campbell-Jones, assistant professor of nursing at Southeast, is celebrating her 40th year as a nurse in Southeast Missouri.

“That was the only negative situation I can remember [as a Southeast student],” Campbell-Jones said. “But, I was strong enough — I kept going, I persevered — and I’m glad I had the perseverance to go on, because if I hadn’t, I don’t know where I’d be today.”

Campbell-Jones never left Southeast upon graduating; while working toward her postgraduate degrees, Campbell-Jones worked at SoutheastHEALTH and the university. In fact, she said these are the only two places she’s ever worked.

She went on to obtain her Master of Science in Nursing from Southeast in 2008 and a Doctorate of Nursing Practice, Executive Nursing Leadership/Nursing Educator from Abilene Christian University in 2019. She’s also a published researcher; her most recent publication titled “Local Anesthesia before Intravenous Cannula Insertion: Recommendations for Registered Nurses in Practice,” was published by ACU in 2019.

Campbell-Jones said she comes from “humble beginnings.” She was born and raised in Haywood City, Mo., where she said, “Everyone was poor; no one had more than the other.”

As the oldest of four children, Campbell-Jones said growing up, she had a close relationship with her family and enjoyed taking care of her younger siblings. This prompted her desire to become a nurse at a young age. 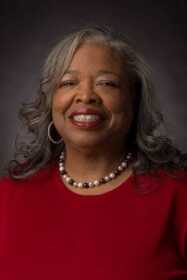 “I like to see what I did to help someone else feel better to live; I’ve always wanted to take care of others,” Campbell-Jones said. “Even after 40 years, I’ve been a nurse, and I don’t even know how to describe it. … It’s a feeling — you feel so good that you helped someone feel better or to live — there’s no price tag on that.”

Since it had been her dream to become a nurse for as long as she can remember, Campbell-Jones said she wasn’t going to let anyone or anything stand in her way.

She said although she knows now it never should have happened to her, she was not unique in her experience back in 1977; minorities in Southeast Missouri often heard phrases like that from those in positions of power, she said.

“That’s what has happened to a lot of children that grow up in poverty down in the Bootheel — some kind of authority figure tells them, ‘You don’t need to apply for that job because Blacks are only good for working in the kitchen,’ or things like that,” Campbell-Jones said.

Still, Campbell-Jones said she’s proud of her hometown and to be the “first educator from Haywood City to earn a doctorate.”

Campbell-Jones said some of these “positive people” include instructors at Southeast back in 1977 who, overall, were “excellent and helpful.”

She said those are the people who heavily impacted her teaching style, and she tries to emulate some of her early instructors in her teachings still, today.

“My intentions are always in helping my students — from the moment that student comes into the [nursing] program until they leave, I’m thinking, ‘They are going to be successful in their courses and become a registered nurse,’” Campbell said. “Yes, some students may struggle, but I want to help those students because there had been a time or two during undergrad that I struggled, and I’m glad people didn’t give up on me because I kept going, and I made it.”

Campbell-Jones said she hopes to honor those who believed in her during her undergrad years and made her the nurse she is today by being a role model to nursing students at Southeast.