Redhawks without Residence: How housing insecurity affects the Southeast community 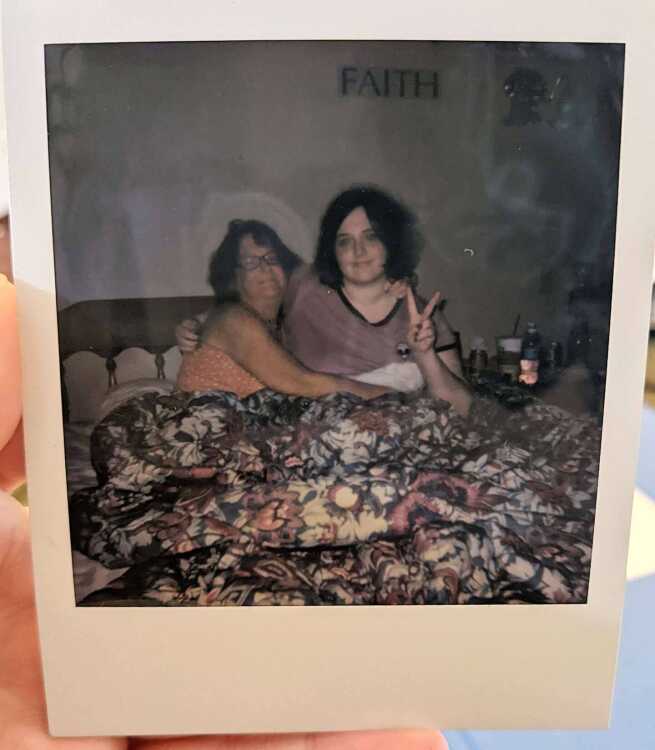 A Polaroid photo captures a moment between Emily Hayden, 17, and her mother at the Woodland Inn in Marble Hill.
Photo submitted by Emily Hayden

Couch surfing. Staying with friends. Extended stays at motels. Sleeping in a car.

Merriam-Webster defines homelessness as “having no home or permanent place of residence,” but it’s clear there isn’t just one definition of what it means to be housing insecure.

For the past several years, the university has housed at least one to two students a year who indicated they were homeless, Director of Residence Life Kendra Skinner stated.

As dean of students, Sonia Rucker works with Southeast students on a case-by-case basis. Whenever possible, she said the university provides residence hall housing at a reduced rate or for free.

“If you’re a Southeast student, we’re going to do what we can to support you with what you’re dealing with,” Rucker said.

Other students recall their experiences with unstable or insecure housing in the past. Housing insecurity can happen at any stage in life and spans across demographics. 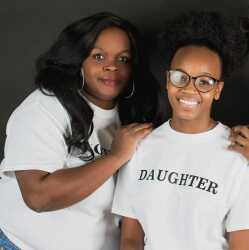 When freshman Peighton Robinson was younger, she said she didn’t understand how a person could be both a mom and a best friend; she said she now wholeheartedly feels that connection. She said her bond with her mother Ramona Bailey strengthened during a time of high-stress in both their lives.

In 2015, the mother-daughter pair experienced a period of insecure housing.

“After having a stressful day at work or school, you think automatically, ‘Oh, I can’t wait to go home,’” Robinson said. “It is a big deal to be able to know you have somewhere to go that’s safe for you and safe for your family. You might not think it means a lot, but it really, truly does.”

When Robinson’s mother left her husband, she initially planned on secure housing with a family member, but it didn’t go as planned. With Robinson entering high school and her brothers also enrolled in school, Bailey said she wanted to keep the children’s lives as normal as possible.

Bailey sat down with her pastor to discuss the possibility of becoming homeless — she said it’s difficult to express needing help in this way. During this time, Bailey said her faith and her pastor’s assistance were all that was helping her keep it together.

While Bailey and her sons stayed with her mother in Sikeston, Mo., Robinson stayed in the parsonage with her pastor. This time was extremely difficult, Bailey said, as she only saw her daughter while picking her up from school.

“I wanted to tell her everything, tell her how I was feeling, but there just wasn’t enough time,” she said. “It’s the time in your life where you’re starting to grow up more, in high school and stuff, and you want to have your mom there through that.”

When the family was finally fully reunited again nearly a year later, Bailey said she felt incredibly relieved. They could all move forward with their lives, she said, and leave the stress of uncertain housing behind.

Her pastor encouraged her to draft a five-year plan. One of her dreams was to complete her degree.

Bailey graduated from Southeast in Fall 2020 with a degree in theater and a minor in music. In January 2021, she launched her own business — The Royal Treatment — which provides cleaning services.

As residence halls closed in March 2020 in response to the COVID-19 pandemic, students were given only a few days’ notice prior to move-out. Several students found themselves leaving residence halls without secure housing. With businesses closed and work put on hold, other students found it difficult to pay apartment rent and feared evictions.

Rucker said several students from different housing situations contacted her for assistance during this time. In these situations, she collaborated with Residence Life to coordinate CARES Act funding, emergency funding and on-campus arrangements.

“Dr. Kendra Skinner, who is the director of Residence Life on campus, her and her staff did an amazing job of making sure that if we sent a student to them that didn’t have a home, they would get them processed and into a room as quickly as possible,” Rucker said.

The CDC called for a federal halt in evictions effective Sept. 4, 2020.

Staying at a Hotel

Emily Hayden considers “home” to be a state of mind, to some extent.

“A home doesn’t have to be a physical place at all,” she said. “Once you’re given so much instability, especially as a homeless youth, you want to find a state in your life where you don’t have to be waiting for the other shoe to drop.”

The anthropology senior said she’s experienced housing insecurity since she was seven years old, when her family’s house in Marble Hill, Mo., was foreclosed upon. She and her mother moved to an apartment, and when she was 17, to the Woodland Inn in Marble Hill.

She shared the double queen bedroom with her mother, who paid weekly with the help of others. With only a mini fridge and microwave, Hayden said meals were a bit of a challenge. They often ate deli sandwiches, peanut butter and jelly sandwiches or gas station snacks. Hayden stayed in the hotel for six months before the two moved to a house.

When reflecting on the housing situation, Hayden said she appreciated the fact that the hotel had WiFi; otherwise, she walked a half mile to McDonald’s to use the internet to complete her homework.

At 17, Hayden’s mom passed away; Hayden said she then entered a period of uncertain housing on her own. She stayed with her grandmother for a few months, a best friend for six months, as well as former partners, before finally settling into the dorms at Southeast.

“It still does feel like a temporary stay,” she said. “I think people who have experienced housing instability, a lot of times, going forward, a lot of places they stay feel like temporary stays, wherever they are.”

LGBTQ+ youth are disproportionately represented among homeless populations. Up to 40% of homeless youth identify as LGBTQ+, according to The Trevor Project. Transgender women of color are especially at risk for housing insecurity, Southeast LGBTQ+ Resource Center graduate assistant Carson Lopez said.

Lack of parental support after coming out often accounts for these high rates of homelessness, he said.

In fact, it can be a major barrier to enrolling in higher education — if students are housing insecure as a teenager and basic needs aren’t met, Lopez said, college is often out of the question. Some students may wait until they’re away at college to come out to their parents, Rucker said, but this may still result in lack of financial and housing support.

“That can happen at any time,” she said.

“Over the course of time they’re on campus, if they’re a sophomore or junior and feel more comfortable identifying openly as LGBTQ, that could potentially mean a loss of that family support,” Rucker said. “We sometimes see students in those situations that are suddenly faced with having home insecurity, food insecurity, financial insecurity.”

Dambach has worked with Project Homeless Connect, an event connecting individuals experiencing housing insecurity with community resources, but she said the topic hits close to home. For several months, she spent time sleeping on couches and moving from house to house.

Similar to Hayden, she expresses frustration with misconceptions surrounding housing insecurity. As she wasn’t living outdoors, she said she feels others don’t consider it homelessness, even though she did not have a stable place to stay. During that time, Dambach said she often didn’t feel sure about where she was staying next.

Repeating the moving process over and over can be draining. In discussions with Hayden, Dambach, Bailey and Rucker, all four mentioned mental health impact as a significant aspect of housing insecurity. Citing the first step in Maslow’s Hierarchy of Needs — shelter — they said it’s difficult to pursue other ventures in life when constantly stressed about living conditions.

“Like anything, if you don’t have basic needs met, it’s difficult to concentrate and focus on an English paper or history assignment,” Rucker said. “We see, sometimes, that students will get on a faculty member’s radar because they see a drop in participation levels.”

“It’s an incredibly traumatic experience, because you’re just developing at that time, and you’re just looking for a place of comfort and stability, and you don’t have that,” she said.

There are several homeless shelters in the Southeast Missouri region; Dambach named the Amen Center in Delta, Revival Center in Jackson and the People’s Shelter in Cape Girardeau.

Student Financial Services works with United Way of Southeast Missouri to manage the Student Emergency Fund, which can be utilized quickly in a financial emergency such as needing immediate housing arrangements. In a crisis, students are allocated $200 to $500 each, according to the Southeast website.

Across the United States, LGBTQ+ housing resources are limited, Dambach said. Discrimination based on gender identity or sexual orientation can be a significant barrier to receiving care, she said, so individuals may feel uncomfortable disclosing they are part of the LGBTQ+ community. Dambach said there are currently zero resources in Cape Girardeau that serve specifically unhoused LGBTQ+ individuals.

When Hayden experienced housing insecurity at 17, she said the resources she did receive were mostly from kind strangers or acquaintances. She received some funding after her mother’s passing, but Hayden said placement in a foster care home would have been more beneficial.

Some resources, such as the Safe House for Women, were inaccessible for Bailey; her work schedule would have forced her to leave her daughter alone at the shelter in the mornings. She couldn’t quit her job, and, at the same time, couldn’t leave her daughter; she said it isn’t as easy to access shelter resources as people may think.

Housing insecurity is a multi-faceted, complex issue that does not have one cause or solution. The concept of “homelessness” itself may even be misrepresented or stereotypically portrayed; this can be a barrier to connecting individuals with help. As demonstrated by these members of the Southeast community, there’s not just one way to experience housing insecurity.

While community resources, such as shelters or funding, are available, they aren’t always applicable to individuals’ specific situations. Education on the circumstances surrounding housing insecurity — and the people who experience it — is vital to understanding homelessness as a whole.