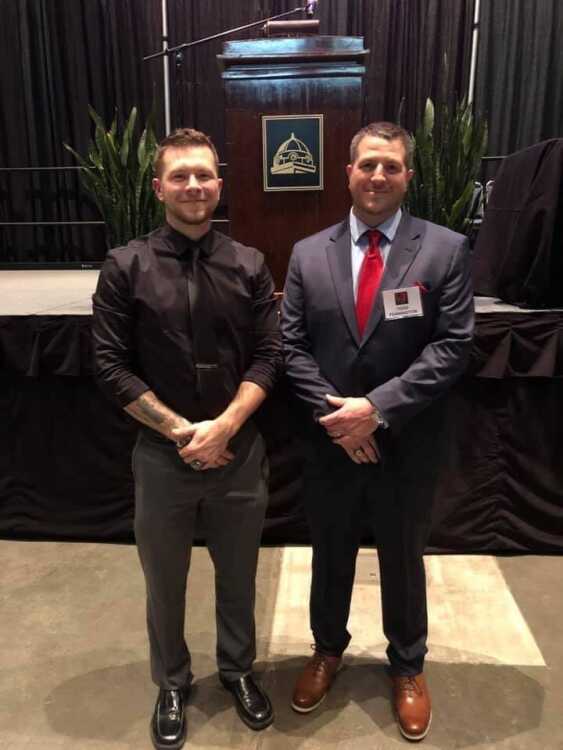 Former Redhawks pitcher Todd Pennington left his mark in the record books at Southeast in 2001, when he posted a 1.33 earned run average (ERA), 12 wins, three shutouts and 121 strikeouts, all good enough for second in the single-season record books. Twenty years later, Pennington continues to leave a mark on the Southeast community by influencing younger baseball and softball players.

Pennington spent three years at Southeast (1999, 2000 and 2001) before being drafted by the Cleveland Indians in the 46th round of the 2001 MLB Amateur Entry Draft. He was inducted into the Southeast Missouri Athletics Hall of Fame in 2018.

Pennington attended Shawnee High School in Wolf Lake, Ill., where he is the all-time wins and strikeout leader. He said the first few years at Southeast were challenging, coming from a small school like Shawnee.

“The first few years were tough on me just learning the baseball part of it,” Pennington said. “It was very fast, a lot of information, but I caught on and was able to be successful at the end.”

Pennington said his time at Southeast taught him a lot from an educational standpoint, as well as how to deal with tough times away from the field.

In 2008, Pennington began working at the Cape Girardeau location of Balls-n-Strikes, a business that provides hitting, pitching and fielding lessons for baseball and softball players in 12th grade or younger at an indoor facility. The facility has four batting cages, which can also be used for pitchers to throw bullpens, as well. 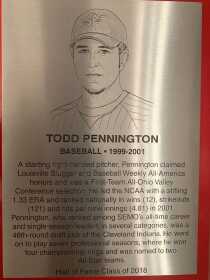 Pennington’s Southeast Missouri Athletics Hall of Fame Plaque can be found in the Show Me Center.
Photo submitted by Todd Pennington

Pennington took over ownership of the Cape Girardeau location in 2010 and said he has had zero complaints throughout the past 11 years.

“It’s been great,” Pennington said. “It’s been tough sometimes, but I’ve enjoyed every bit of it.”

The most rewarding part of the job for Pennington is seeing the progress the athletes make each year.

“I’ll see them the next year, and it’ll be a completely different kid because of the things that they’ve learned,” Pennington said. “That’s one of my favorite things to see in here.”

Pennington said a big focus at Balls-n-Strikes is promoting the fun aspect of baseball, which he said also helps him avoid burnout.

“I make sure that I try to have fun with the kids,” Pennington said. “We try to promote [fun], as well as learning and experience, but it just makes it an all-around better experience for all of us if we can make it fun.”

The instructors at Balls-n-Strikes are people Pennington has worked with and seen progress in as a player.

“They really learn how to teach the game, and we put them in there and let them work through it,” Pennington said. “Then, I can tell where they’re going to be and how they’ll be for us as an instructor.”

Pennington said his job is to make the next part of the athletes’ baseball experience better and hopes to help make Southeast Missouri an exciting region for baseball.

“If I can do that, they’ll play longer and get a better view of baseball and keep it going,” Pennington said. “If I do my job correctly, I think we’ll have more and more baseball players here.”

When Pennington isn’t giving lessons, he also owns the Missouri Bulls, an organization that began in 2009 and has teams that start at 9U and go up to 18U.

Pennington’s wife Kristi helps him with the business side of the Bulls, and Pennington said having his family involved has been nice.

“My wife’s great, and she’s way smarter than I am,” Pennington said. “She is organized, and she can help me remember all those things and make it look presentable when I do have to present them.”

Pennington said he had a lot of good coaches along the way and credits them for teaching him about the educational side of baseball, as well as drilling the concept of hard work into his head.

“I want to be able to give that back to these kids I’m working with,” Pennington said. “I get to present the feel of the game to [the kids], and a lot of people cannot do that because they didn’t get game time experience. I feel like that I have, and I can help them with that.”