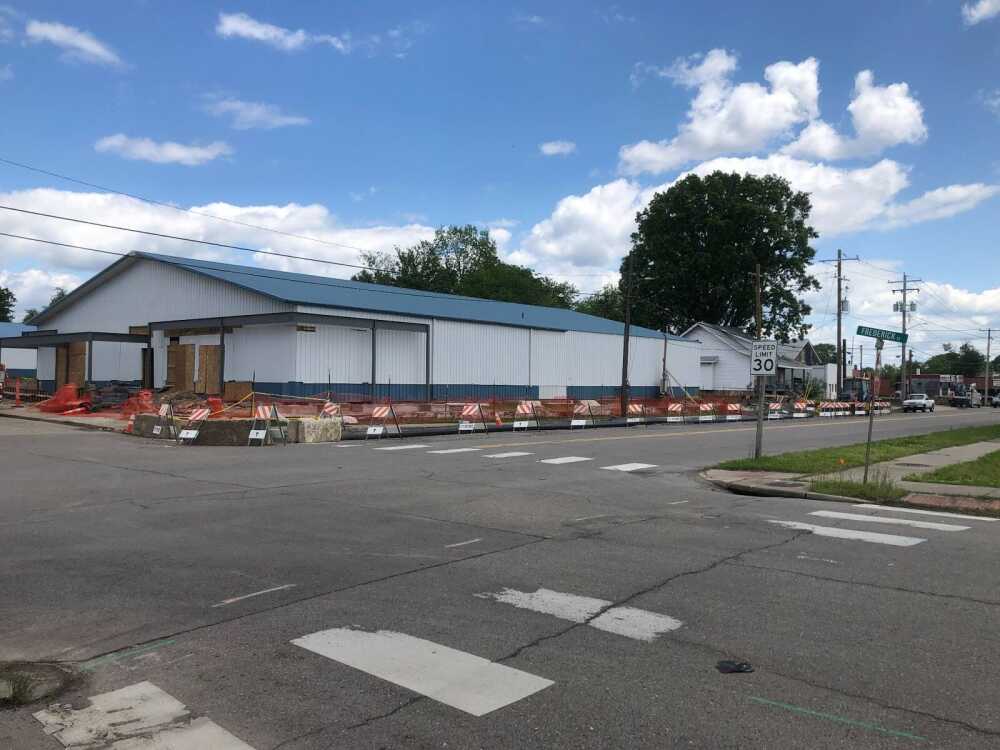 The building at 340 S. Frederick St. in Cape Girardeau is currently under construction as part of the new River Campus expansion project and will hold some of the “dirty arts” programs like ceramics. From the building to the River Campus, it is approximately a two-minute drive.
Photo by Hannah Radden

These are five common themes listed in the 2018 master plan for Southeast Missouri State University. To understand what the university needs to improve in specific years for their students and overall campuses, several tactics are created through the master plan, which is developed from the input of the university and its members.

Brad Sheriff, vice president for finance and administration at Southeast, said the master plan is a collaborative effort built over a two-and-a-half-year period which consists of more than 70 meetings with various stakeholders.

“In some ways, the master plan is not a wish list, but it's a very broad-reaching effort,” Sheriff said.

Sheriff said the expansion is a large development strategy for the university. With the budget crisis throughout the past few years coupled with the COVID-19 epidemic, some of the original proposed plans built into the master plan had a possible impact.

“The demographic pressures that are driving enrollments down across almost all of higher ed and the difficulty that state legislators have of maintaining state support for higher education — all those things, even before the pandemic came on the scene, were significantly impacting public higher education and its ability to fund all of the things that it both needs and wants to fund,” Sheriff said.

He said some of the recommendations in the plan could have been implemented if it was in a different environment.

Sheriff said the expansion will include renovating two buildings for the ceramics and painting program. The building together will hold approximately 15,000 square feet of studio space, gallery space and classroom space located on Frederick Street.

Holland College Dean Rhonda Weller-Stilson is involved with the planning process for the expansion. She said they are planning a third building near the leased buildings at the River Campus which will hold classes like sculpture and woodworking.

Many of these majors are spread out across the campuses and are separate from the other art communities near River Campus. The expansion will help meet accreditation needs and provide students with adequate space to complete large projects.

She believes this partnership will benefit all students and reach the overall university goal.

“The goal is for students to learn by what others do,” Weller-Stilson said. “So, we think that it is going to create this really wonderful energy of upperclassmen and lowerclassmen being together with that discipline.”

Sheriff started his position at Southeast on Aug. 1 of last year. While he has not been part of the entire planning process, he said he was able to research the changes and budgeting needs for the expansion.

According to Sheriff, if they were to do everything in the 2018 master plan, the total would cost approximately $240 million dollars.

Sheriff said when the master plan was a year old, the River Campus expansion was identified as a four-to-five-year priority for development resources, including funding of the university.

“I’ll be honest, this is a little bit in some ways probably more unusual than not — we are hitting it in line with the anticipated timeline,” Sheriff said.

For the expansion, Sheriff said the “big ticket” items will not begin until the space is fully online and turned over to the institution for use. Sheriff said they have identified some funding to help get the space in working order for in-person use and fund the specific cost of the area.

“They are starting fundraising efforts,” Sheriff said. “Those honestly have been slowed much more than expected because of the pandemic.”

While the pandemic has created large problems for the university, some budgeting areas they are focusing on for the institution are from the pandemic one-time funds, such as the Federal Coronavirus Relief Act and CARES Act. These do have some limitations for university use, as well.

The 2018 master plan recommends the expansion for the River Campus to meet the needs of the Department of Arts and Design for the program “Dirty Arts.” The construction is labeled to house approximately 27,300 square-foot of space. Currently, ceramics is located in a separate leased building off campus while sculpture, metals and woodworking are placed in Serena.

“They are going to come from those fundraising efforts that will occur as a cooperative effort really between the foundation and the Holland College,” Sheriff said. “The university will use some of its own essentially reserved savings account dollars to get us into this as the fundraising begins to take hold and bring dollars in through the foundation.”

While the Holland College of Arts and Media has the largest cash gift donation for the university and has seen ongoing budget cuts throughout the year, Sheriff said these are entirely separate from the dollars related to the expansion process.

“Until the funding begins to roll in through philanthropy, the university dollars that will be used [for the expansion] will be reserved dollars, so one-time dollars that are effectively in our savings account,” Sheriff said. “All of the ongoing cuts that began in fiscal [year] ‘20 are still in the works — those are really related to the university's operating budget. The difference is the operating budget is kind of our checking account.”

The college has also seen budget cuts with the faculty and staff reductions, and some of these cuts may create an apparent contradiction to the expansion. Sheriff said overall there are about three different ways to look at this matter.

What the university is committed to spending year over year over the dollars that we’re able to bring in (payroll), a combination of reductions and investments, and what is just priority.

“It's a constant sort of balancing act and trading off of the things that best serve our students and help us best serve the community and the region and try to be as robust and a successful institution as we can possibly be,” Sheriff said.

“There are times when we are actively cultivating them for various things that we feel like the university needs to be doing,” Sheriff said.

While Sheriff wasn’t involved in the beginning planning stages of the expansion, he said it is entirely reasonable for the university to expect an increased growth with these added programs and show a justification on why the expense is important.

“Students and students’ families want the opportunity to live and learn in the nicest spaces possible,” Sheriff said. “Whether it's a chemistry lab or a dance studio or a working farm, the infrastructure and the amenities that we're able to offer are important. At the end of the day, they do help with both recruitment and with retention, which is equally important.”

The 2018 master plan was made public to view in January 2019. For more information about the specifics of the plan, visit the Special Collection and Archives Room located in Kent Library.