Personal trainer grows in fitness journey while instructing others 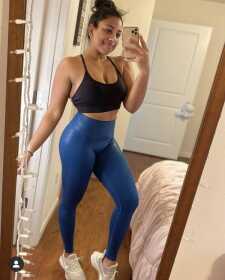 When Jenika Kulasekera started her fitness journey in 2014, she said she struggled with feeling motivated to visit the gym.

It was a difficult lesson to learn, but Kulasekera said she needed to change her thinking to see results.

“I used to depend on motivation a lot,” she said. “I think it actually comes down to your discipline and how badly you want it for yourself.”

Switching her focus from motivation to self-discipline completely revolutionized her approach to personal fitness. After experiencing her own transformation, the Southeast senior and pre-veterinary science major now trains others in reaching their fitness goals.

The international student’s journey began when she was living in Sri Lanka and created a goal to lose weight. During the time, Kulasekera said women were often discouraged from lifting heavy weights — there was a fear of looking too muscular or “manly,” she said. She stuck to certain workouts without weight training but didn’t see the results she wanted.

After moving to the United States to attend Southeast, Kulasekera said she started training with a friend who explained more aspects of fitness to her.

“It’s good to have an outside eye and someone who’s more educated in that area to guide you,” she said.

It soon grew into a love and appreciation for the background knowledge behind training; nutrition and exercise work together in a delicate balance to produce results. There’s a lot more than meets the eye, she said.

She began an online coaching business, Beyond the Ashes, in 2019 to encourage others in their fitness journeys. Beyond the Ashes began as a free service for five women — Kulasekera said she found it fun — but after a client asked to pay her, the coach said she received certification and officially launched the business. It has since grown.

When consulting clients, Kulasekera said two common goals for women are muscle tone and weight loss. Specific goals may change over time, such as women’s focus on slimming or boosting certain parts of the body. It can also depend on trends in the fitness industry.

“I still have some friends who are very old-school. They’re like ‘Oh no, my butt’s too big, and I want to slim it down,’ and I’m like, ‘Why?’” she said. “Times are very different now, and I like it!”

Similar to her hometown in Sri Lanka, Kulasekera said women in Southeast Missouri sometimes fear creating bulky, masculine muscles through weight lifting. That’s usually a myth, she said — as women do not produce a significant amount of testosterone, female athletes’ bodies would not respond in the same way to weight training.

No matter the concern, she said she finds fulfillment in the joy she sees in her clients.

“I fell in love with being able to help people,” Kulasekera said. “It’s so hard when you go online — there’s so many things, and people can get so confused. When I started helping girls and they were really happy to see results, it made me happy!”

Patience and consistency is key to sticking to a gym routine; she said one particular example is a client who worked with her for two months. While the progress was slow, it was noticeable — after their sessions were completed, Kulasekera said her client lost a total of 10 pounds.

“Honestly, it’s just seeing them happy and putting a smile on their face,” she said. “It’s nice to get the message where they’re like, ‘Oh my God, I can fit into this outfit I couldn’t fit into for so long.’”