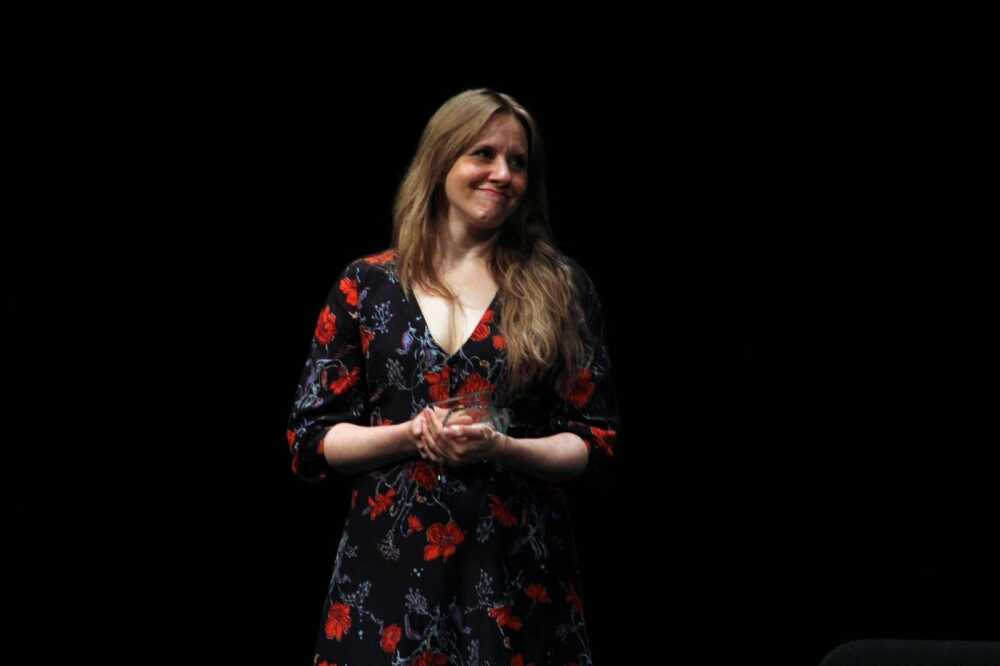 Emily Bohannon smiles after receiving a trophy for being selected as the winner of the inaugural Lanford Wilson New American Play Festival on Saturday, June 19, in the Donald C. Bedell Performance Hall on Southeast’s River Campus. Students in the Jeanine Larson Dobbins Conservatory of Theatre and Dance at Southeast will produce the play in Spring 2022.
Photo By Brooke Holford

The Lanford Wilson New American Play Festival closed out the week of playwright festivities with performances, a panel discussion and an awards ceremony during the eighth annual Summer Arts Festival Saturday, June 19.

“The Romantic Movement” by Emily Bohannon, a playwright, screenwriter and actress originally from Sandersville, Ga., was selected as the winner of the festival.

Students in the Jeanine Larson Dobbins Conservatory of Theatre and Dance at Southeast will produce the play in Spring 2022. Her play is also being considered for publication with Concord Theatricals.

Kitt Lavoie, assistant professor of theatre: acting and directing at Southeast, said judges selected the top five full-length plays out of more than 750 submissions from around the United States, which were performed at the River Campus throughout the week.

Bohannon’s play was then selected as the winner out of the top five.

“The Romantic Movement” is a play set in the summer of 1967 in rural Florida. In it, high school students gather to study classical music in the heart of the Vietnam War and the Summer of Love, according to the event program.

“It really is a play about yourself — figuring out who you are through art and becoming sort of alive to music and the joy of that, and the joy of finding a community and people who understand you through music,” Bohannon said.

As a piccolo player in her school band all throughout middle and high school, Bohannon said this play allowed her to write about some of her own personal experiences that were “a huge part of her life.”

Bohannon said the play also gave her the opportunity to create roles for college-aged students, specifically women, that didn’t exist while she attended undergrad. She said most of the characters she played were much older than her and hard to relate to.

“I felt like I never really was able to find exactly who I was at that time,” Bohannon said. “So, through this process, it’s given me a chance to almost reach a hand back to my younger self by creating material for all these young women to work on — that’s really felt personally healing and fulfilling to me.”

Bohannon is a graduate of the Lila Acheson Wallace Playwriting Program at the Juilliard School, earned a Bachelor of Arts in Drama from the University of Georgia and was a Rockwell Scholar at the Einhorn School of Performing Arts.

The other four finalists in the full-length division include “Randi & Roxanne,” by Rachel Graf Evans; “Jungle Juice,” by Kevin Renn; “All Eight” by Lilly Camp and “Civics and Humanities for Non-Majors,” by Jeff Talbott.

“One of the goals of this [playwright] festival is, really, to be a resource to universities around the country to find plays that they should be doing that have college-aged kinds of characters or characters that students can play,” Lavoie said.