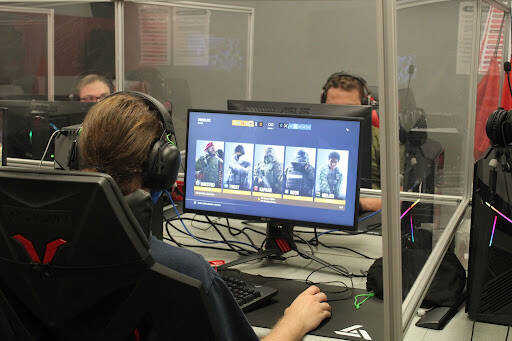 Joseph Raymond IV plays a game of Rainbow Six Siege in the eSports Arena while sitting next to other players. He is playing on one of many PC’s in the arena that are free to use for casual gameplay.
Photo by Emma Kratky

Don’t call it a comeback. Semo’s eSports Club has been on campus since 2019, but recently, they have been expanding through student involvement and the creation of new ideas within the program.

With a small start in August 2019 as a program under the student recreation center, the eSports club has blossomed into an open and welcoming community, with an arena located on the first floor of the Towers Complex, next to Rowdy’s. During the first two months of its creation, it became the biggest club on campus and has remained in that position ever since.

However, during the pandemic, the club faced hardships that caused a lack of activity within the club. Payton Ables, eSports chief of staff, played a large role in trying to formulate solutions for this problem.

“Covid kind of kept us stuck here; we weren’t able to expand out to tournaments, get our name out, and it did halt students from wanting to come to the club room because of restricted hours. … It made us feel closed off, but we moved into content, mainly,” Ables said.

Currently, the eSports club is hosting four to five streams a week, covering competitive games as well as special game nights and other events. Zach Healy, a content officer within the club, helped directly with building a streaming platform that would fuel the club into becoming well-known during times of quarantining and social distancing.

“For some of our streams, our numbers were a little bit higher because people weren't able to go out and do things,” Healy said.

The club tried to hold onto this viewership, streaming consistently enough so the audience would stay involved.

Student involvement is key in the club and is a big factor in helping it continue to advance. Last week, tryouts for the club were held. During the sessions, players are put into private matches on randomized teams.

If the club officers determine their skills in game sense, communication and mechanical skill are what they are looking for, they will be placed onto the Varsity or JV team. Both of these teams will have around 5-6 players and host about 2 subs as a backup.

Many players joined the different teams, including freshman Sara Yilmaz, who is excited to be a part of the organization.

“I like being able to bond with people over video games,” Yilmaz said.

Yilmaz is heavily interested in Overwatch, a first person shooter where you play on teams of 6 and secure an objective. She enjoys the community that comes with the game.

“The biggest thing you can do is be active in the arena; we like to choose from people we feel out; we like to get to know you,” Ables said.

The position of eSports Club president will become vacant at the end of the school year when current eSports Club President Corey Johnson steps down from the role after he graduates.

Johnson said he is hopeful the work he has put into the club will result in more recognition down the road.

“Personally, I would like to see more recognition from [the] administration,” Johnson said. “This is a legitimate program, and I really believe we deserve scholarships, even if it's not a full ride.”

If you’d like to be a part of the upcoming events and teams within the eSports Club, join their Discord server and follow the instructions within the channels to become a member here. You can find more information about the club itself here.