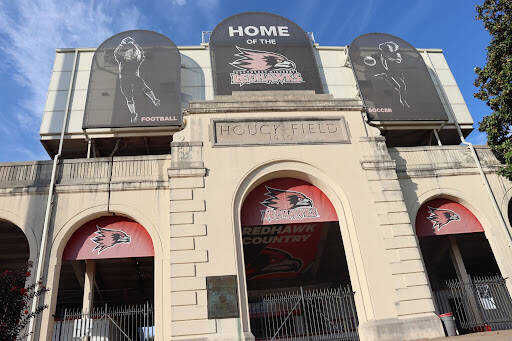 When thinking of important events this time of year, a few may come to mind — Yom Kippur, the first day of fall, Halloween — but one very close to home may not be so top-of-mind: the anniversary of Houck Field’s opening.

This year marks the 91st year since the stadium’s construction. According to the Southeast Missouri State University website, on Oct. 3, 1930, Houck Field was officially opened and named in honor of long-time Board of Regents member and president Louis Houck.

Joel Rhodes, professor of history, regards Houck as the father of southeast Missouri and credits him for modernization and development in the Southeast community.

“He was a lawyer, a journalist, a railroad entrepreneur; he was on the Board of Regents here for 39 years. Thirty-six of those, he was the president,” Rhodes said. “If you look at all the developments that really made southeast Missouri, his fingerprints are all over.”

Houck’s leadership during his tenure as president of the Board of Regents resulted in several well-known university buildings, including Academic Hall, as well as the purchase of the quarry where his namesake field now sits, Rhodes said. Houck’s intention was for the area to be a sports facility or performing arts amphitheater before his death in 1925.

“Houck had no interest whatsoever in sports. So the fact that they named a field house and a stadium after him … he would find that fairly ironic,” Rhodes said. “In his very last meeting of the Board of Regents, he led the regents to approve the purchase of that quarry.”

After almost a century of history and memories made at Houck Field, plans for renovations to the stadium’s south grandstand have begun. According to a Sept. 1 email from University President Carlos Vargas, the south grandstand will not be in use during the Fall 2021 season, in preparation for necessary structural renovations. In the email, Vargas credited accelerated deterioration of the structure and an emphasis on fan safety as motivation to begin the project.

Professor of History and Director of the Bollinger Center for Regional History Steven Hoffman said it is normal to see deterioration of outdoor concrete structures such as the south grandstand over time due to the exposure to water and extreme freeze-thaw weather patterns.

“It all comes down to water. We think water is good, but really, water is bad when it comes to buildings and structures,” Hoffman said. “That deterioration shortens the life of the building or would require an intervention.”

Hoffman emphasized the stadium’s historical significance in the Southeast community and considered ways to preserve the architectural legacy while improving on and modernizing the structure.

“I think the potential exists to reflect that view and that arcaded entrance that’s like, ‘Oh, I’m coming into the stadium,’ to retain some of that front-facing historic character,” Hoffman said. “When you have a property like the stadium with decades of people’s experiences here at Southeast, you hate to lose that. But also, the recognition that you can’t save everything to have a really 21st-Century stadium as a place for our teams to compete and our fans to enjoy it.”

Southeast fans and students of past and present, including 2019 football alumnus Bud Hilburn, share countless memories and experiences at Houck Field during the many events that take place there. Hilburn attended the rivalry game between Southeast and Southern Illinois University Sept. 2 and said while it was fun to be back, some things didn’t feel the same.

“A packed-out Houck Field was always a good atmosphere to play in,” Hilburn said. “I definitely miss the game-day experience and all the preparing for a game; it was just a little bit different since the home side was closed.”

Hilburn recalled memories from Houck Field during his time as a player for Southeast and the atmosphere connected to playing at home.

“Walking into the stadium always had the same feeling, kind of didn’t matter where we were, but it was always better whenever it was Houck because that was our home field,” Hilburn said. “The scene where it’s downtown and they had the tailgating in the parking lot and everything going on, on Broadway — it was fun.”

The sentimental impact of Houck Field was echoed by Southeast’s Director of Athletics Brady Barke. Barke said the stadium acts as a front porch to the university and anchors the start of downtown Cape Girardeau.

“There’s a lot of memories that have taken place, so it’s a special place for so many alums and so many people from the community that have had the opportunity to experience various events there,” Barke said. “As we think about ways to renovate that space, I think we need to be able to build upon those memories and make sure that we continue to have a unique environment.”

Houck Field has hosted numerous memorable events, including the solar eclipse watch party in 2017, the first-ever Football Championship Subdivision (FCS) playoff game in 2018 and the Air Force B-2 bomber flyover before the SEMO versus SIU football game in 2021.

Barke said there is an opportunity with the renovation project to create better amenities and experiences within the stadium for the community, students, athletes and coaches, an opportunity he said is long overdue.

According to President Vargas’ Sept. 1 email, the university began working on conceptual designs for the renovation in 2019. Barke said these designs update core areas of the stadium, including seating, restrooms and concession stands while adjusting the stadium to accommodate the way fans experience a game now.

“It’s being able to create the experience more than just the game,” Barke said. “I think we need to be really creative in our approach to make sure that we can fully utilize a venue like that because it will be something that is an asset, far beyond even just the sporting events.”