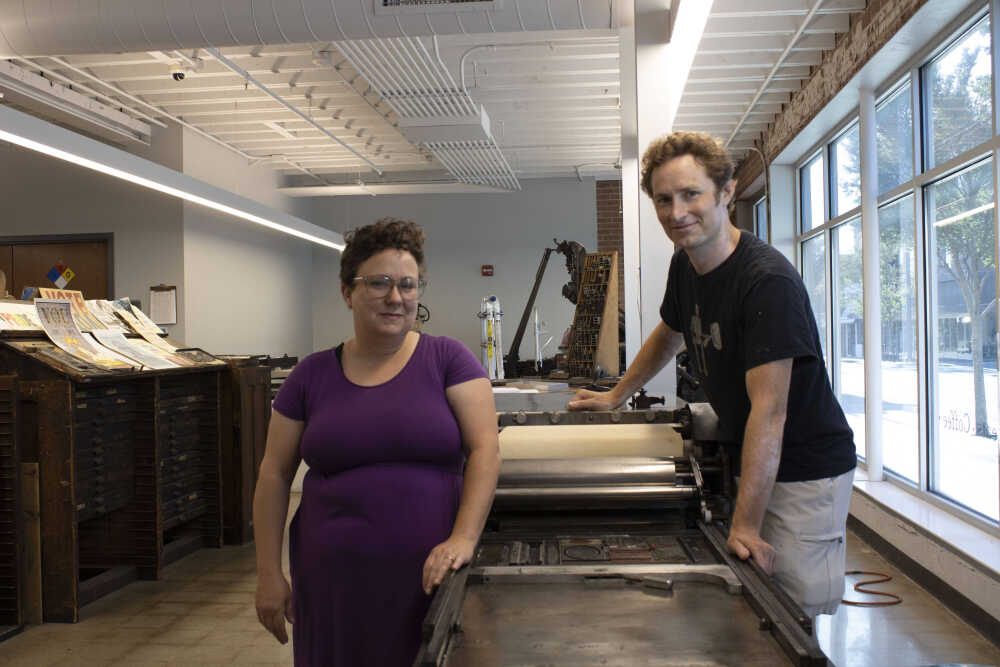 Printmakers and art educators Hannah and Blake Sanders in their studio in Catapult Creative House.
Photo by Cynthia Wallman

Printmakers Hannah and Blake Sanders married at a collaborative art event in St. Louis after living in multiple places across the country. They competed for the same printmaking position at SEMO in 2014. Now, they are both art educators at the university and work at Catapult Creative House.

The couple has collaborated with their students and rustmedia to create a children’s coloring and activity book for the upcoming Shipyard Music Festival in Cape Girardeau. The book is based on the bands that will perform at the festival, which will be held Sep. 17-18 at the Century Casino in downtown Cape Girardeau. The book will be distributed for free to the first 100 children who come through the gates at the festival.

Hannah March Sanders, associate professor in the department of art and design, is the area head of printmaking and education coordinator for Catapult. This is the second year she has worked with rustmedia on the Shipyard Festival coloring book. This year she designed the cover and a local musicians’ spread for the book.

Some of her students volunteered to design pages for the coloring book.

“It’s like word jumbles, mazes or just coloring pages. It’s fun to do,” she said.

Blake Sanders is an instructor of art and design and Catapult press coordinator. He and Hannah operate Orange Barrel Industries, which provides community outreach and curatorial practice in the form of workshops at universities and community-based arts organizations across the country.

“For years now, we have been organizing exhibitions, portfolio exchanges, which is where you get a whole bunch of artists together, and you make a body of work based on a theme,” Blake said. “Orange Barrel Industries is a way for me and Hannah to do what we're really passionate about, which is to spread the gospel of printmaking.”

Digital arts senior Lauryn Moore is a student assistant for Hannah Sanders. Moore designed two pages in the coloring and activity book, contributing many hours on the project.

“For The Wild Feathers, I did a word jumble, giving an overview of what the band genre music is, putting the band’s name in, putting the instruments of what each member played,” Moore said.

For the Hero The Band coloring page, Moore chose what she described as a “groovy wavy style reflecting the blues and R&B music.”

Ryan Nevill, senior fine arts major in sculpture and president of the Print and Sculpture Club, has worked at Catapult for four years and assists with workshops and events. Nevill designed The Unlikely Candidates’ connect-the-numbers page, which consists of a cluster of stars based on the constellation Gemini, the name of one of the band’s songs. He also designed a coloring page for the band Motherfolk.

Nevill’s work for the coloring book was all hand-drawn with Adobe Illustrator Slash Procreate.

“I had to draw each individual line within Illustrator with a pen tool,” Nevill said. “It was very strenuous, but I love how it looks and how solid it got.”