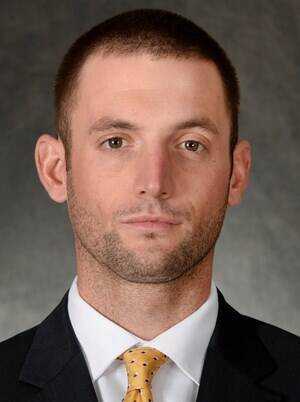 Dan Mckinney was named the new pitching coach of the Southeast Redhawks baseball team, announced Thursday, Aug. 26, by coach Andy Sawyers, and he is already making an impact.

Mckinney has been around the game of baseball his whole life, from his playing days at the University of Michigan to now being a coach at Southeast.

He has a history of making teams’ pitching staffs better by getting them on the same page, through the ideals of confidence and motivation.

Senior left-handed pitcher Blake Cisneros, who posted a 3-2 record with 22 strikeouts and two saves in 20 innings last season has already gotten to know the new addition to the staff quite well.

Cisneros is one of many seniors eager to compete for coach Mckinney and pick up where he left off from last season.

Mckinney said his preparation has not changed, and his approach is to be confident through the process of getting his staff to another championship.

“Being confident and dominant with our identity is the most important thing,” Mckinney said. “We take pride in our identity, which is hitting the strike zone and eliminating free passes at all costs. I want them to know what it takes to be a pitcher at this level and most importantly, be a successful ball player on our staff here at SEMO.”

Southeast Missouri State baseball fans saw a very successful season in 2021, as the team finished out with 30 wins and a conference championship.

Mckinney said he felt a difference of culture right when he stepped foot on campus and likes the winning attitude the team brings.

“There is something different about the atmosphere around this team. I have not, to date, joined a team coming off of a regular season championship and a conference championship, so that is different, and it is obvious in terms of the culture,” Mckinney said. “Our guys are field rats and love the work that it takes to put themselves in a position to compete at the highest level possible.”

Mckinney said the most important thing to do when joining a new team is to take the time to get to know each person individually.

“Every guy responds differently to certain styles of coach,” Mckinney said. “But the ultimate goal is to get the best performance and the max effort out of each player every day.”

Mckinney and his pitching staff looks to have another winning season as the Redhawks take the field this upcoming spring season.