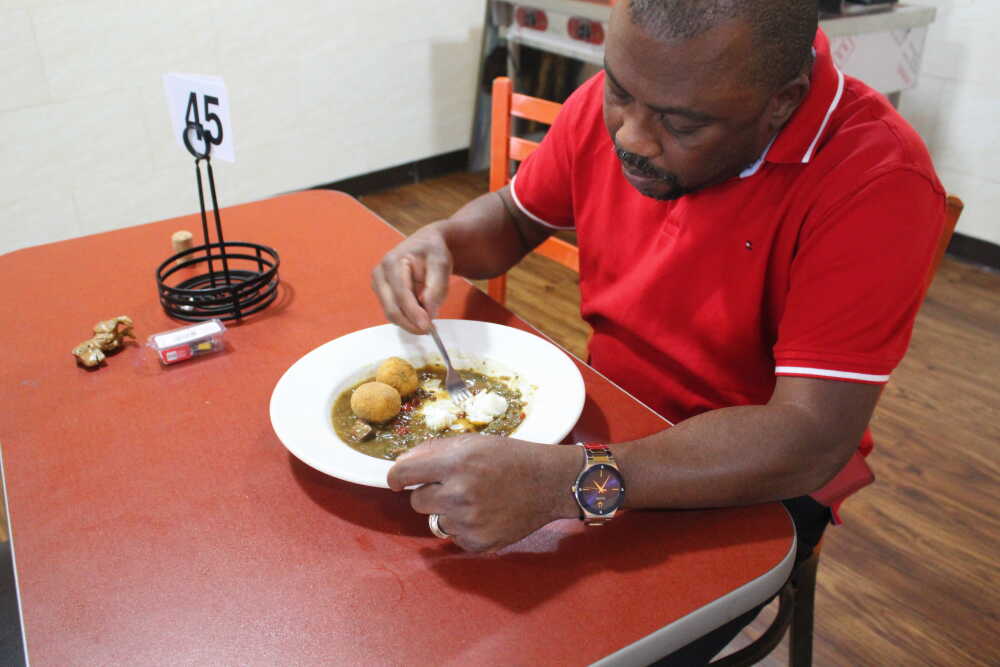 Owner Marie Louis Jeune's husband, who also works at My Marie, eats a meal at the Cape Girardeau restaurant.
Photo by Jowairia Khalid.

Food has an innate quality that pulls at the heart and touches the soul. It builds a unique connection that transcends cultures, languages and geographic locations.

So when Marie Louis Jeune heard of the Aug. 14 earthquake in Haiti, her native country, she found herself connected to those impacted by the 7.2 magnitude quake.

“In 2010, we were in Haiti,” she said. “When we heard about the [2021] earthquake, I cannot imagine what they’re going through now, because we were there in the first one.”

At her Cape Girardeau restaurant, My Maire, Jeune serves Caribbean specials such as jerk chicken, oxtail and plantains. Every Monday since mid-August, she has opened My Marie’s doors on their usual day off, with 10% of all proceeds through the week benefiting the survivors of the earthquake.

Rewind 11 years to 2010. Jeune, who opened her own restaurant in Port au Prince in 2008, had just moved her business to a new building.

“It was easy for me, because that was my kitchen,” she said. “I’ve been cooking since I was a kid, and to tell you the truth, I cooked for my neighbors, too.”

Her restaurant, Chef Antillais Bar and Restaurant was thriving, until the southern Haiti town was struck by a magnitude 7.0 earthquake.

The building was damaged, as well as her family’s Port au Prince home. They rebuilt the Chef Antillais restaurant, which translates to “Island Chef” from French, and it remained open for several years afterward.

However, the damage to Jeune’s home caused the family to move to the United States.

For nearly a decade, Southeast musical theater instructor Joshua Harvey lived in Port au Prince on and off for a week at a time. One June, he spent the entirety of a month in the Haitian city, providing assistance and service — such as helping to clean houses, investing in the construction of buildings and helping run a guest house — through a program associated with a local church in Haiti.

He says he fell in love with the country, the culture and, of course, the food. He considers My Marie to be comfort food and often visited the restaurant as a “Saturday weekly ritual” before the pandemic.

Harvey, who is from Virginia, calls Haiti his “adopted culture” and was excited to first visit Marie’s restaurant in 2019 — the same year it opened. He said it’s rare to find authentic Haitian food, as he said the closest restaurant is likely a six-hour drive to Chicago.

While living in Cape Girardeau prior to starting My Marie’s, Jeune said she’d often hear encouragement from friends and family to open a local restaurant with her husband and son. Cooking comes naturally to her; while she doesn’t recall the first thing she learned to cook, she said she has early memories of frying fish and plantains.

“When I lost my mom, I was five years old. I used to take care of cooking for my family,” she said.

Jeune said she sold sandwiches and other dishes to pay for school, in addition to cooking for her family. She grew up cooking for her neighbors and family members and has been surrounded by cooking ever since.

Her restaurant, which opened in 2019, has built a following among Cape Girardeau residents; Jeune will often leave the kitchen to meet customers personally.

Generosity is at the heart of the Haitian community, Harvey said, and something he experienced with Jeune, as well as the people he met in Haiti.

“That’s something beautiful about the Haitian culture, which relates to Marie’s work after this earthquake,” he said. “They really have a communal sense. So, if I were to send money to a friend of mine today, he would probably keep a couple bucks of it and disperse the rest of it among the community.”

“It’s nice to see the person who’s cooking your food once in a while,” she said. “For me, it just kind of removes some of the mystery.”

She fell in love with the “authentic” Haitian cuisine at My Marie; her husband, whose family is from Puerto Rico and Cuba, loves the oxtails. Youngblood Ortiz leans more toward the Caribbean coleslaw and jerk chicken — a dish she highly recommends.

The associate professor mentioned the campus base of customers; she’ll often hear professors speak highly of the restaurant, which is located on Williams Street.

“They’re good people, good food and a good cause,” she said. “They’re trying to help their community — their other community — and I would encourage people to give it a try.”

Youngblood Ortiz mentioned that during the pandemic, many restaurants suffered; however, she said she felt more comfortable with the COVID-19 measures at the restaurant.

“I wish I could do more [for Haiti], but I’m not in that position. But we’ve struggled,” Jeune said. “Anything we can, we’re going to help.”

Proceeds are donated to Food for the Poor, a religious-based charity that focuses outreach efforts in the Caribbean and Latin America. Jeune says the restaurant has raised $1,300 in the past month for aid focused in Haiti.