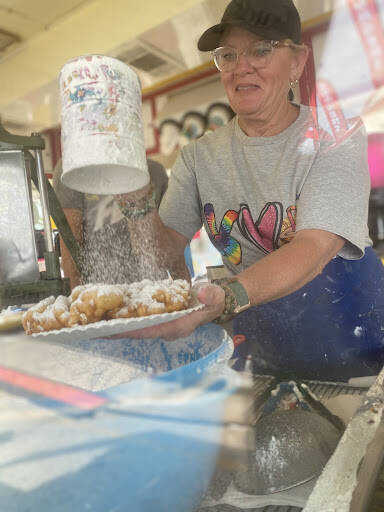 The SEMO District Fair has come and gone and I got to taste some of the best fair food before we said farewell for another year. My quest was to find the best creations, and I certainly had my work cut out for me to decide on a favorite!

With camera in hand, parents in tow and stretchy pants on, I knew it wouldn’t take long to find my first dish.

As I sat down to tear into my sandwich, I noticed two things. First: I was not going to be able to eat this alone, because it was loaded down with meat and all the trimmings onon a large bun. Second, my parents had already helped themselves to my meal.

The zesty seasoning helped meld it together, and it had a smoky flavor with crispy, charred pieces of onion, peppers and mushrooms. I would definitely recommend the philly cheesesteak. 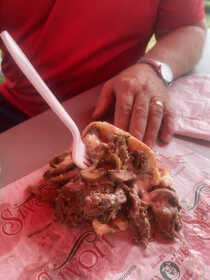 Next, I’m standing in front of a funnel cake stand. Now, you can’t go to the fair and not have funnel cake.

R&R owner Rebecca Motsinger said her specialty was previously a red velvet funnel cake, but this year, she tried something different.

“Since I loved the icing that I made for the red velvet funnel cake, I decided to create a birthday cake funnel cake,” Motsinger said.

When Motsinger handed me the plate, I couldn’t control my inner child at seeing the cute sprinkles and pastel purple icing!

I was hooked. The cake melted in my mouth, and the icing tasted better than the powdered sugar you normally get on a funnel cake.

Motsinger had so much success with the new flavor, she said she plans to bring it back every year.

After two incredible dishes, I needed something to drink and found the perfect beverage.

Beasley Concessions made a drink called The Lemon Shake-Up.

“This is a secret recipe,” Keith Beasley, owner of Beasley Concession from Marion, Ill., said. “My wife created it.” 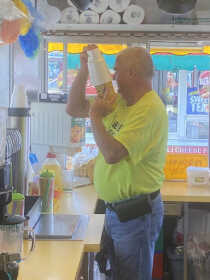 He adds ingredients into a cup and does a country two-step dance to mix it.

The Lemon Shake-Up had the perfect amount of tartness, yet was sweet enough to satisfy my thirst.

I was ready to hit my next target. My eyes landed on a plate of pulled pork nachos.

Two-Sides Grillin’ lured me by the aroma from their barbecue pit. They can be found at the weekly farmer’s market Thursdays at the West Park Mall parking lot.

“We picked the pulled pork nachos because you can’t find them anywhere at the fair,” owner Crystal Sides said.

The meat was tender and perfectly barbecued. The nachos were so loaded down with barbecue that it didn’t take long to fill me up.

I did manage to find a healthy smoothie option to drink.

Fit Fuel employee Jasmine Brown said the most popular drink they sold at the fair this year was called “Think Pink.” It was packed full of bananas and strawberries with a handful of kale, which I could not taste at all!

She handed me a giant cup full of pink fluff as she told me there was no sugar in it. I admit, I was a little hesitant, because, come on — no sugar usually means no taste.

I was wrong, and truthfully, I didn’t even miss the sugar.

As the day came to an end, I waddled back to my truck with all my leftovers, blisters on my feet and two exhausted parents who were already asking what they were going to eat next!

It was a good day at the SEMO Fair.