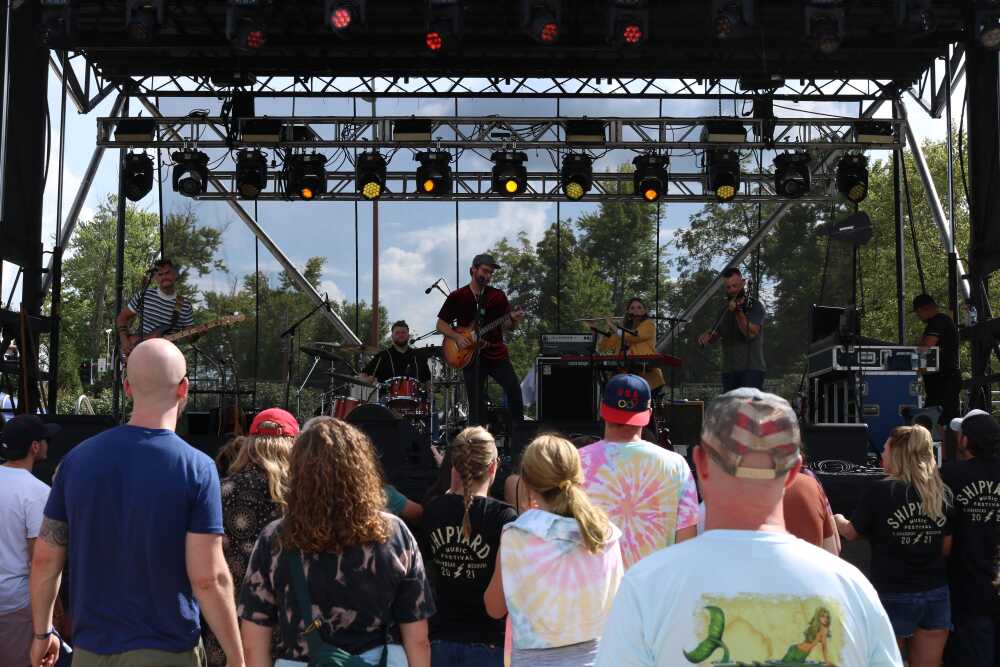 The gates opened at 5 p.m. Friday and closed after festival headliner Son Volt performed an encore as requested by the audience. On Saturday, the festival gates opened at 11 a.m. but did not get crowded until after Noon when the performances began. According to rustmedia’s Project Manager Jamie Phillips, the festival sold more than 2,000 tickets.

Live music played continuously throughout the two days, since the festival’s lineup alternated between the main stage and the SEMO-sponsored Scout Sessions stage. When one of the national touring acts finished performing, a local artist began performing on the stage sponsored by Southeast.

The Shipyard Music Festival offered opportunities for students to get involved outside of simply attending the festival, including working as a food vendor or volunteering with the box office, information, merchandise and ticket checking. All volunteers received free admission to the festival for three hours of work.

SEMO student from the Harrison College of Business and Computing, Dawson Yates, volunteered at Shipyard and handed out VIP packets at the information booth.

“This is my first time out at this festival,” Yates said. “So, it’s really cool to see all the local development that’s happening and all the local restaurants giving out food here.”

One of Shipyard’s food vendors, Sushi by Angel, is owned by student Angel Carrasquillo. The owner said this was his first time at the Shipyard Music Festival. He said he heard of the festival around campus and began creating a relationship with rustmedia before he became one of the six food vendors at the 2021 event. Other food vendors included Mary Jane bourbon + smokehouse, Speck, Fuel Bar + Taco and The German Cook.

Carrasquillo is opening a restaurant downtown and saw Shipyard as a great opportunity for the community to get to know his product better.

“This weekend, I’m probably running on five hours of sleep,” Carrasquillo said. “Just for today, I prepped ‘til two in the morning and got up at 5 a.m. to start making sushi again at 6:45. It’s very intense.”

Carrasquillo said he made approximately 500 to 600 sushi rolls for the festival, and he appreciated the feedback he got concerning his sushi brand.

International Admissions graduate assistant, Ruchika Sharma said her favorite part of the festival was trying the new food, including the sushi from Sushi by Angel and the tacos from Fuel. Sharma interned with rustmedia when they hosted the first Shipyard Music Festival in 2018, and she has attended every Shipyard since.

“I love the atmosphere, and I love how it brings a lot of Cape Girardeau together,” Sharma said.

The fourth-annual Shipyard Music Festival will happen in 2022, with dates still to be determined. Learn more about the festival and how to get involved on their website.