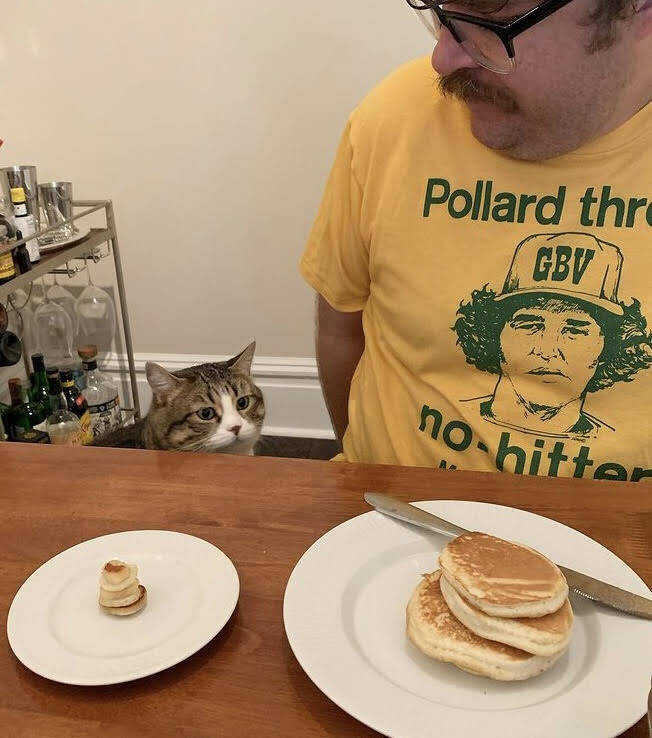 Six-year-old Poptart is described as a “chonky” cat influencer.

The 13-pound kitty has a following of more than 36,000 users on Instagram, garnering comments such as, “She is so hypnotic in her potatoness” and “GORGEOUS LOAF ART” on her posts. She’s internet friends with similar feline accounts and sometimes acts as an influencer for pet brands.

“We used to joke around that she’d just ate a cinder block,” he said. “She’s very rectangular, like a loaf of bread.”

Brubaker and his wife adopted Poptart from the Cheshire Grin Cat Cafe in St. Louis in October 2019, following the passing of one of their cats. Poptart was found outside, sick and afflicted with worms and was brought to a shelter. At the shelter, she was on a list to be euthanized before the Cheshire Cafe brought her in.

Her Instagram account, launched in September 2020, features daily photos and videos of the viral kitty. Poptart, also known as “Ploppy,” “Round Clown” and “Poppy T,” often appears with her younger cat siblings Crow and Shrimp.

“Poptart always seemed like she wanted a friend,” Brubaker said. “And so we adopted [Crow], who was just wild.”

While Poptart and Crow’s personalities didn’t quite mesh, he said Crow became friends with another kitten, Shrimp, whom they later adopted. Now, all their kitty adventures together are featured on the account @poptart.thecat.

While Brubaker said his wife mainly manages the Poptart account, he’ll often help by holding treats behind the camera. He also assists in problem-solving on the account and brainstorming ideas for reels.

“Sometimes, the stories or reels will become like projects,” Brubaker said.

Based on her attitude, Brubaker theorizes she was an extremely spoiled cat owned by an older adult who passed away and whose children couldn’t care for the cat. But still, he said, no one really knows. Even the cat’s exact age is unknown; when he adopted her, the estimate was anywhere from four to seven years.

Poptart is often asked to create personalized videos wishing someone happy birthday, Brubaker said. One user in Australia requested a pawprint from Poptart to gift a superfan they knew. When handling custom requests, Brubaker asks users to donate money to a shelter, rather than profiting from the account.

Brubaker doesn’t receive any revenue from the account, but Poptart does sometimes receive gifts from brands. Her kitty litter comes free from a brand that produces specialized wood chip litter, in exchange for a certain number of posts.

In his creative writing class, Brubaker said he casually mentioned his cat’s Instagram as his first-day-of-class fun fact. Later in the semester, he said a student arrived to class wearing the custom T-shirt.

“When she walked in and unzipped her hoodie, I was just like, ‘Ha! ha!’” Brubaker said. “Like, ‘Thanks for supporting our favorite cat cafe.’”

During Poptart’s rise to fame, Brubaker said she’s received quite a few strange requests on her Instagram. One user even offered to purchase her for $4,000 (an offer Brubaker and his wife denied).

The world of cat Instagram can sometimes be toxic, Brubaker said. Poptart will sometimes receive private messages shaming her owners about the cat’s weight. However, Brubaker said the trolls don’t bother him, as he and his wife have taken several medical measures to ensure Poptart is healthy.

Poptart has weekly weigh-ins on her Instagram story, with a goal of losing a total of two pounds from her veterinarian. Brubaker said her status as a “chonky” feline isn’t just restrained to her appearance; it’s in her attitude, style and state of mind.

“It’s just who she is,” he said. “She’ll probably always be a chonk at heart.”