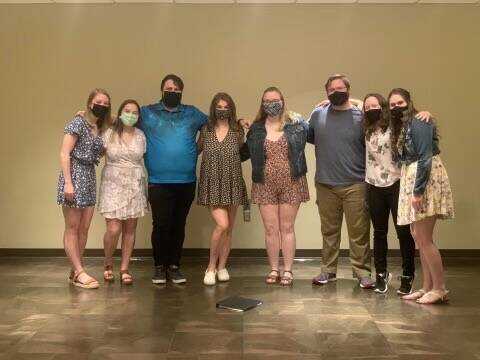 A previous group of Redhawk Rhythm members pose for a photo.
Submitted photo

Southeast’s a capella group Redhawk Rhythm is currently preparing an audition for the International Championship of Collegiate A Cappella (ICCA) competition. They could not compete last year, but they have begun warming up their voices once again with hopes of making it into this year’s bracket.

According to VarsityVocals.com, the ICCA was founded in 1996 inside of a college dorm room. It has now grown to include more than 450 groups from nine regions across the United States and Europe, all competing in a bracket-style competition.

Former choreographer and current vice president Bella Linstruth joined the group three years ago upon meeting the group’s founder at the Involvement Fair. She competed alongside the group her freshman year and is preparing to compete again this year.

“To prepare for this competition, all we really can do is go over our music and get it memorized,” Linstruth said. “We have a musical director for our group, and he chose to come in and help us run our practices and learn our music. Once we all have it down without a piano to accompany us, and we no longer need our music, all we have left to do is sing, record it and send it for the competition.”

Linstruth remembers her first competition well; while they may not have placed in the actual competition, the memories she made will always have a place in her heart.

“It was our first year, and we didn’t expect to blow anyone's socks off, but it got our name out there. I remember people coming up to us as we calmed down, saying things like, ‘I really loved your guys’ set,’” Linstruth said. “That made me think that we may not have gotten the score we wanted, but the people remembered us.”

Administrative staff assistant and student Robb Davis currently works as the musical director for the group. Davis aids the group in conducting and teaching the music, as well as making sure nobody falls behind in learning.

The audition will be recorded as a video and sent in to be reviewed once it is finished. A recorded audition may be easier for those performing; however, Davis is a bit concerned this may become a small hurdle as the audition grows closer.

“I have had previous experience with video auditions, and I know sometimes that the recording setup is not the most ideal in terms of sound quality. This could be a struggle, but as long as we are singing together as a group and the harmonies are right, it should not be much of an issue.”

Neither Linstruth or Davis were able to give specifics as to what songs their group will be performing. However, Linstruth said that many of their competitions have a “pop song theme focus,” and Davis stated that this year they will have a theme of “love through the decades.”

The competition will be held at Missouri State University, and the finals will take place at Carnegie Hall in New York City. A grand prize of $25,000 will be awarded to the winners. The entirety of the competition is free, for both those participating and spectating.