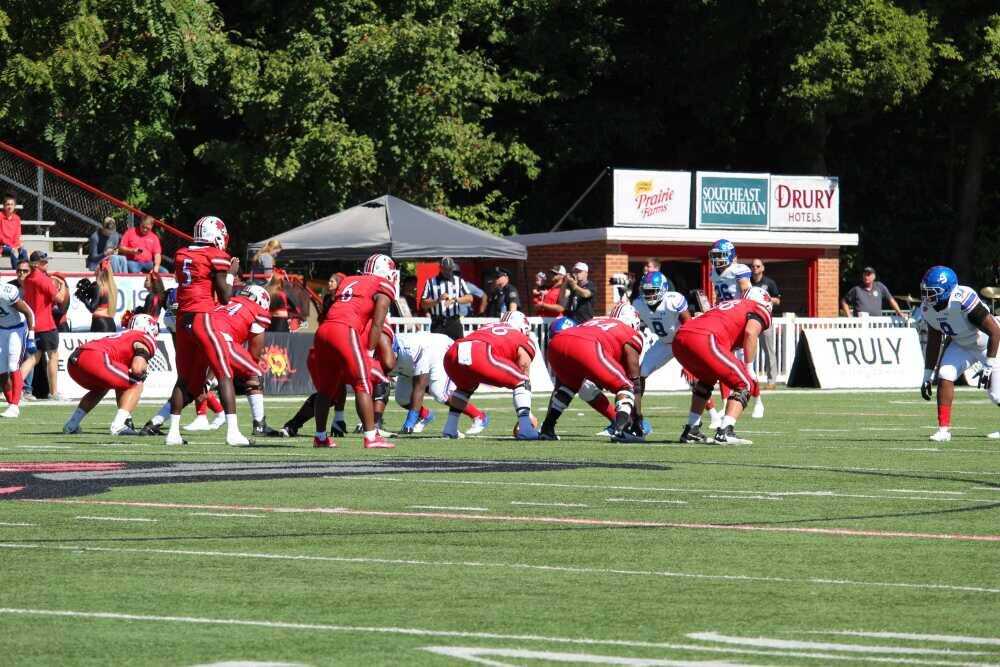 Junior quarterback CJ Ogbonna prepares to take the snap with senior running back Geno Hess to his right during Southeast's 47-14 win over Tennessee State on Sept. 25 at Houck Stadium in Cape Girardeau. Hess posted 205 rushing yards and three touchdowns for the Redhawks in the win.
Photo by Kailyn Veach

After what could be considered a less-than-ideal start for SEMO Football, the team made their way into the win column Sept. 25 when they defeated Tennessee State University 47-14. In the closing minutes of the game, Southeast junior quarterback CJ Ogbonna threw his third touchdown of the year to senior tight end Will Weidemann.

Ogbonna transferred to SEMO after a two-year career at Hutchinson Community College in Hutchinson, Kansas, where he won a National Junior College Athletic Association National Championship in 2020. Ogbonna said he chose to play for the Redhawks because he felt it was a good fit for him.

“All the coaches really wanted me to come play here,” Ogbonna said. “I think that was the biggest thing.”

Playing teams like defending Football Championship Subdivision National Champions Sam Houston State, Southern Illinois University, ranked 7th in the FCS at the time of the game on Sept. 2, and Southeastern Conference member Mizzou was not easy, but Ogbonna said the Redhawks can beat teams like that if they work hard to get to that level.

Southeast is 1-1 in the Ohio Valley Conference after the 28-17 loss against Tennessee Tech on Oct. 2. SEMO head coach Tom Matukewicz said his ultimate goal is for Ogbonna to help the team get to the conference championship, and Ogbonna agreed.

Matukewicz said Ogbonna possesses all the qualities that make what he believes is a “SEMO” quarterback.

“Not only the physical aspects — while he is tall, thick, has a good arm and is mobile,” Matukewicz said. “His teammates also really embraced him early on, and he’s just a calm and collected guy.”

Quarterback mobility is a quality in the position that has grown in recent years, with players in the NFL such as Lamar Jackson, Kyler Murray, and Cam Newton all who finished in the top three in rushing yards in 2020. It’s something SEMO offensive coordinator Jeromy McDowell said opposing defenses can struggle with.

“If you have a quarterback that’s not as mobile, the defensive line can affect the passing game more,” McDowell said. “With CJ, the threat of his feet really gets defensive coordinators nervous.”

This has proven true, as through four games, Ogbonna has rushed for 163 yards while throwing for 495 yards and three touchdowns. SEMO was picked to tie with Austin Peay State University for second place in the OVC behind Murray State University in the preseason poll from July. 19. Southeast is playing a different schedule this year than in most seasons, seeing OVC opponents Murray State and UT Martin twice.

The Redhawks’ next game is Saturday, Oct. 2, in Cookeville, Tenn., where they will take on the Tennessee Tech University Golden Eagles in a battle of the birds.