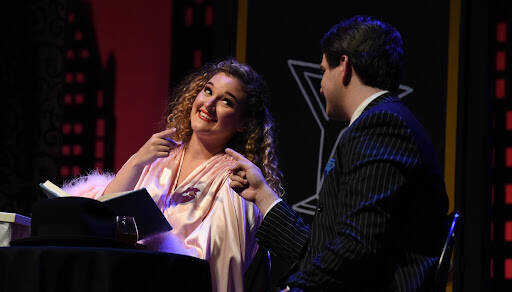 Southeast’s Conservatory of Theatre and Dance presented the musical “Guys and Dolls” from Wednesday, Sept. 29, through Sunday, Oct. 3. The musical was set in 1930s New York and follows the rocky story of two couples: Nathan Detroit and Miss Adelaide, and Sergeant Sarah Brown and Sky Masterson. Detroit and Miss Adelaide were engaged for 14 years, and their relationship was always unstable because of Detroit’s gambling. Masterson, also a master gambler, took the straight-laced Brown to dinner in Cuba to win a bet, and the pair ended up falling in love.

Exploring the themes of love and relationships was central to the production. Director Kitt Lavoie explained how the cast intentionally emphasized the love rather than the tension between Nathan Detriot and Miss Adelaide.

“I think we really found the ways that they really do love each other, even though they drive each other crazy,” Lavoie said.

Musical theater junior Olivia Wheeler, playing Sergeant Sarah Brown, described what Lavoie told the cast to help them fully understand the idea of what it means to love someone else.

“Love is such a big thing, and it doesn’t have to have a meaning you can pin down,” Wheeler said. “Love isn’t just what you like or love about someone, it’s the person you become when you’re with them. And I think that really applies to Sarah. She loves Sky, she enjoys his company, but really, she loves the person she becomes when she’s with him.”

Understanding how the strict, Christian character of Sergeant Sarah Brown came to be was crucial to Wheeler’s performance.

“I think the biggest surprise for me with discovering things about Sarah was how much her past experiences affect her right now,” Wheeler said. “Because in the script, you don’t know about her childhood or how she’s grown up.”

Once Wheeler had a thorough understanding of Sarah’s character, it helped her appreciate her transformation even more.

“Sarah has such a cool arc, where towards the beginning, she’s this harsh, tough lady who’s super judgemental of every person she sees, but as the story goes on, she meets Sky,” Wheeler said. “And through Sky, she learns to see the gamblers and sinners as people, and that’s such a beautiful thing to me.”

Wheeler said she has appreciated Lavoie’s guidance in this process.

“He’s very intuitive, and he’s so focused on telling the story, that I think that’s why it’s such a good show,” she said. “Every single thing that he’s given us direction about or he makes choices about or his vision has to do with the story he wants to tell.”

And it’s not just Wheeler who was able to play her part better because of her well-rounded exploration of her character.

“Sometimes, we’d just yell at each other through a whole scene,” said BFA acting junior Gabriel Lawrence, who played Nathan Detroit. “Sometimes, the quieter scenes, to yell it and do a loud exercise through it is really cool because then you can find, like, oh, that word is different than I originally thought.”

Audience member Kate Terreri said all the actors seemed very comfortable in their roles, as their body language was in tune with their characters.

“It's not just the body language or just the vocals,” Terreri said. “They’ve done their research, and they seem believable.”

Lavoie has especially enjoyed seeing the growth in Jared Ritter, a sophomore who played Sky Masterson, which is his first role in a Southeast production.

“It's been really wonderful to watch him figure out how to use a technique in the production setting. Being able to apply a tool he learned in class to create a character brought a new dimension to his learning experience,” Lavoie said. “That's one of my favorite things about working in academia, is to be able to be part of a student’s journey.”