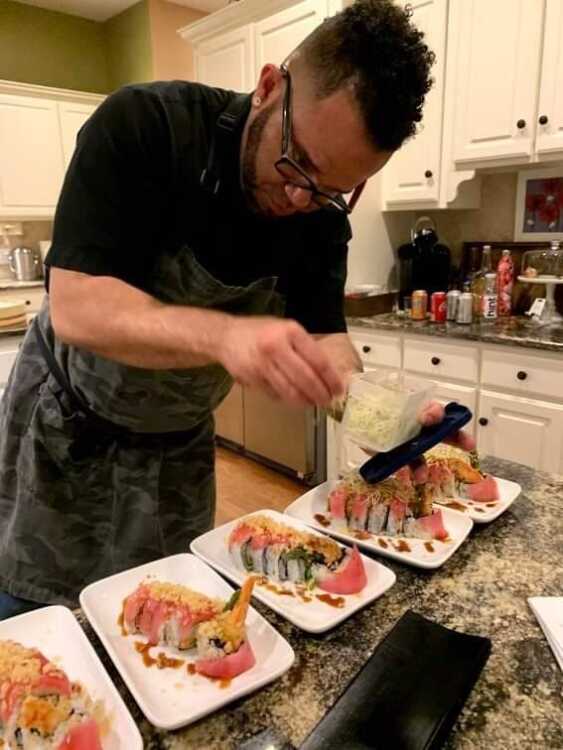 Hospitality Management student Angel Carrasquillo spends 30 to 35 hours a week working at Sedona Bistro and 20 hours a week at his small business and still manages to make it to his morning classes. His love for sushi and the drive for his degree keep him going.

Carrasquillo grew up in a rural community in Puerto Rico. In his 20s, he said he found himself in a lot of trouble.

“Most of my 20s, I struggled with drugs and the streets; I had a real problem,” Carrasquillo said. “I've been to prison a couple of times.”

Carrasquillo said he decided to join the Army and ended up coming to the United States, hoping to get out of the mess he was in.

When he came to the U.S., Carrasquillo said he began to realize he was too young and had a hard time living by himself.

After Carrasquillo left the Army, he started school at Mizzou in Columbia, Mo. to study Nutrition, but never had the chance to go to class. Carrasquillo was hired at one of the on-campus sushi restaurants as a dishwasher, but his boss had different plans. Instead of becoming a dishwasher, Carrasquillo learned how to make sushi, falling in love with the process. He is now the owner of the small business Sushi by Angel.

After his job in Columbia, Mo., Carrasquillo was soon able to get an apprenticeship at the famous sushi restaurant, Matsuhisa, in New York. From there, he worked in Kansas City, Arizona and Las Vegas before becoming the grill master at Logan's Roadhouse in Cape Girardeau. In March 2020, Carrasquillo lost his job since Logan’s shut down in the pandemic.

After he lost his job, Carrasquillo said it was very challenging for him, but he made it work. He began doing sushi pop-ups around the Cape area, buying sushi fish from an old colleague and creating sushi for customers. Now, Carrasquillo works at Sedona Bistro as the Team Lead in the kitchen. 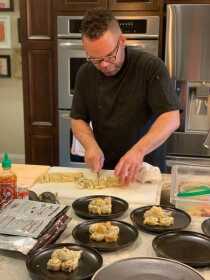 At a sushi bar, you watch the chef prepare and serve your meal. However, at a face-style sushi bar, the sushi is prepared the way the chef would like.

Carrasquillo tries to use as many local products for his sushi as possible. He begins preparing it by washing and cooking the rice. He usually prepares the actual sushi fish on-site, whether it be at a pop-up or a party. Since preparing the sauce is a little more time-consuming, Carrasquillo makes his sauces beforehand.

Carrasquillo is known in the local area for his cardinal roll, radish sprout masago, sesame aioli and lemon drop.

While owning a small business, working and going to school, Carrasquillo said his secret to success is time management.

“If you want to succeed, you've got to wake up early and go to bed late. There is no time to play around. Get rid of all your games on your phone,” Carrasquillo said.

Lisa Essmyer, professor of hospitality management, learned about Carrasquillo’s passion for sushi and his story during an international cuisine day at which Carrasquillo did a demonstration for the class. Essmeyer said Angel’s story is inspirational for other students, and for people in general.

Carrasquillo will be opening Omakase by Sushi by Angel in January 2022 on 430 Broadway St. in Cape Girardeau.

Omakase means I’ll leave it up to you in Japanese. Carrasquillo said he decided to name his restaurant Omakase since he mostly does pop-ups at his parties.

“My menu is going to be always changing, always fresh. And the customers are going to get a different level of freshness and attention like they’ve never had in this town,” Carrasquillo said.