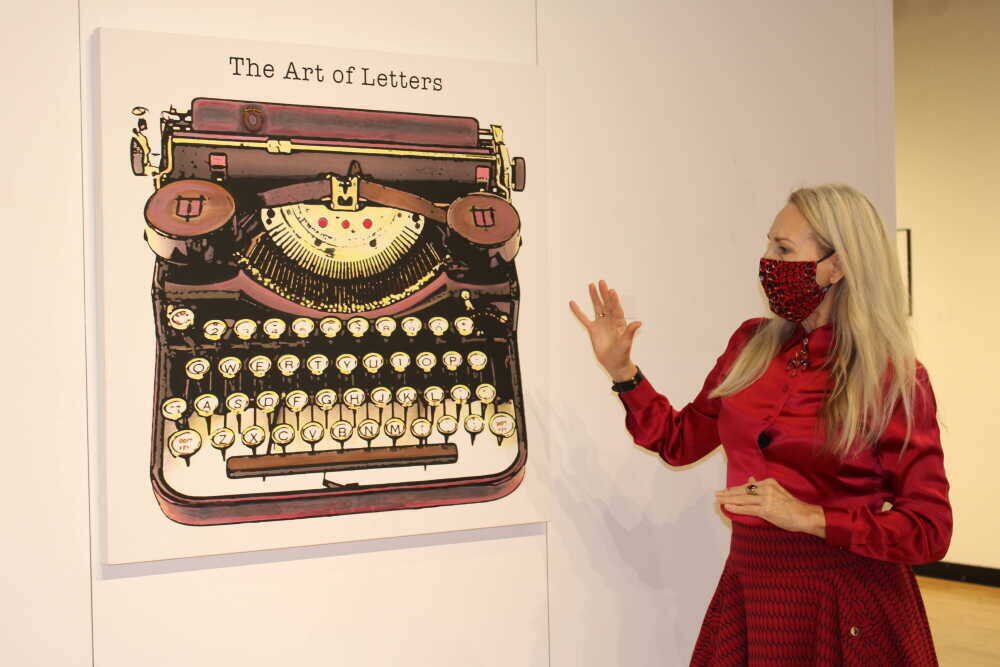 Louise Marler explains how she was able to create this piece. She handpainted it herself.
Photo by Alyssa Lunsford ~ Photographer

“I started thrift shopping and collecting vintage things when I was a student here in Cape Girardeau,” Marler said. “It’s the equipment that is my inspiration.”

After graduating from SEMO with a degree in marketing, Marler spent time working in publishing and advertising before pursuing the art she is known for today. In the 1990s, Marler owned a printing company in St. Louis with a partner where she used her design skills to create logos, brochures and business cards for local start-ups. When she sold her half of the business, she got a camera and decided to publish her own art.

“It was a really slow build into this day and this moment,” Marler said. “You have to be very determined [to become an artist]. I’m not going to say it was easy.”

Marler’s comprehensive exhibit included a wide range of art, from a photography series titled “Oil is History” showing old automobiles in a Ste. Genevieve junkyard, to a piece titled “Contax Red Lightbox” with a graphic of a camera placed onto an old lightbox meant for film photography.

One of Marler’s newer exhibitions titled “Keywords” uses the artist’s homemade font to create short poems in three letters by four rows, an allusion to the 4:3 aspect ratio used in film and television. The first framed art piece in the exhibit reads, “Now is a Virtue.” Marler said the piece is all about being “current-centered,” focused on the now rather than the past or future.

Visitors to the art exhibit enjoyed seeing the old typewriters, cameras and radios captured in a mixed media format. Exhibit attendee Joyce Loos said she could remember her father having a camera like some of the vintage Kodaks and Polaroids featured in the art.

“I think it’s very unique,” Loos said. “I can’t say I was as far back as all [the equipment pictured in Marler’s art] is, but some of it, I am.”

Crisp Museum’s manager and curator Jim Phillips chose Marler as part of the museum’s commercial artists series. Through the series, Phillips wants to showcase artists who make a living off their art and come from nontraditional art standpoints. Phillips plans on continuing this series in future Friday at the Arts exhibits.

“[Friday at the Arts] is a way to broaden horizons for people on a set calendar basis,” Phillips said. “It’s one day to set aside for the arts specifically — kind of like a holiday of sorts.”

View or purchase Louise Marler’s “Digital Americana'' artwork at the Crisp Museum Oct. 1 through Nov. 14. The museum is open from 9 a.m. to 5 p.m. on weekdays and 1 to 4 p.m. on Saturdays and Sundays. For more information on the artist, visit her website.