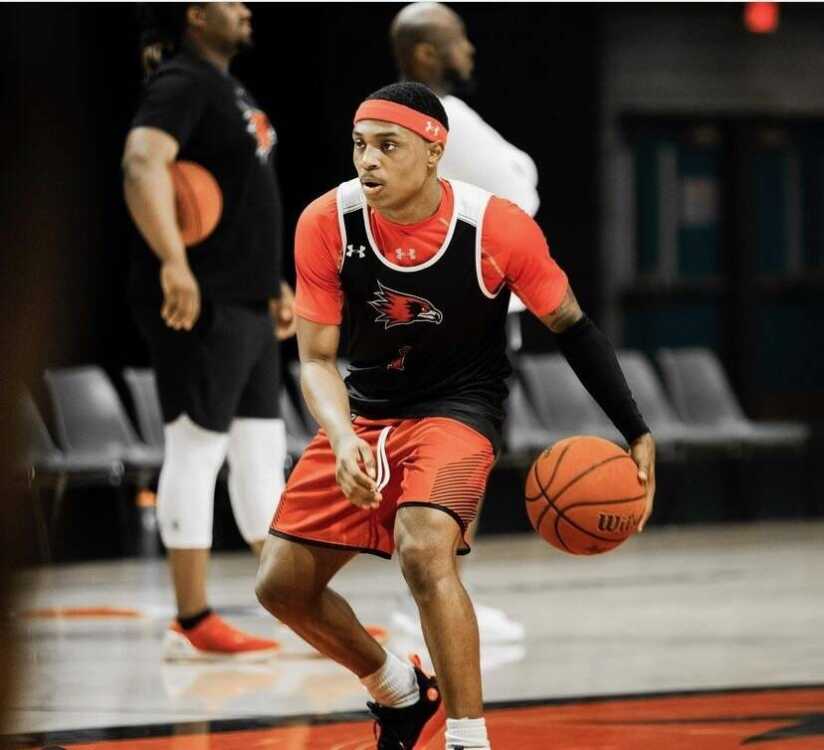 Phillip Russell goes through drills during a practice at the Show Me Center in Cape Girardeau. Russell transferred to SEMO from Saint Louis University.
Photo submitted by Phillip Russell

Junior guard and Saint Louis University (SLU) transfer Phillip Russell looks to make a lasting impact on his new school and teammates by playing the game he loves.

Russell made his decision to transfer from Saint Louis University to Southeast Missouri State University this past offseason.

“What went into my decision to come back to SEMO was really [assistant] coach Keith Pickens,” Russell said. “We have a very close bond, so when I got in contact with him and saw that the doors were still open, that is what made my decision clear.”

The decision for Russell to decommit from Southeast more than a year and a half ago was a tough one, as then-head coach Rick Ray was fired. Russell then walked on for his hometown team at Saint Louis University, but he said the feeling he got from Southeast never disappeared.

Russell made it clear playing at SLU helped him learn the ways of coming out successful and is confident to bring that same attitude here to Southeast.

“I learned how to win, because at the time, we were ranked No. 25 in the nation, and also playing under my cousin Yuri Collins taught me how to run a team the right way by being a humble leader,” Russell said.

Head coach Brad Korn has full confidence the newest addition to this team will perform while pushing his teammates to do more.

“I think the biggest thing about Phil is that he is not just a point guard, he is a basketball player that really knows and understands how to play the game, while having the ability to play multiple positions,” Korn said.

Coach Korn said he has found more and more ways every day that Russell has been a benefit to this team and has said his attitude and poise as a player has pushed the rest of the team.

“It has been good coaching Phil — like I said, he is always talking and always trying to be the most competitive player on the court,” Coach said. “You gotta love a guy that brings that kind of competitive energy to a team.”

While Korn settles in to bring his team further into the college basketball rankings, sophomore guard DQ Nicholas was keen on what the team needs to neutralize not only throughout the offseason, but when it comes time to step out on the court.

“The most important thing is buying into the culture here,'' Nicholas said. “We have got to play together more, while being efficient on the run and moving the ball at a high pace. The keys to success not only start with the regular season, but building that culture and chemistry in the offseason, especially now that we have added a key piece.”

As the team is just 34 days away from tip off, they look to capitalize on their newest addition in Phillip Russell, while taking that chemistry from the offseason and carrying it into the regular season.

The Redhawks open up against Missouri State, which will tip off Nov. 9 at 7p.m in Springfield, Mo.