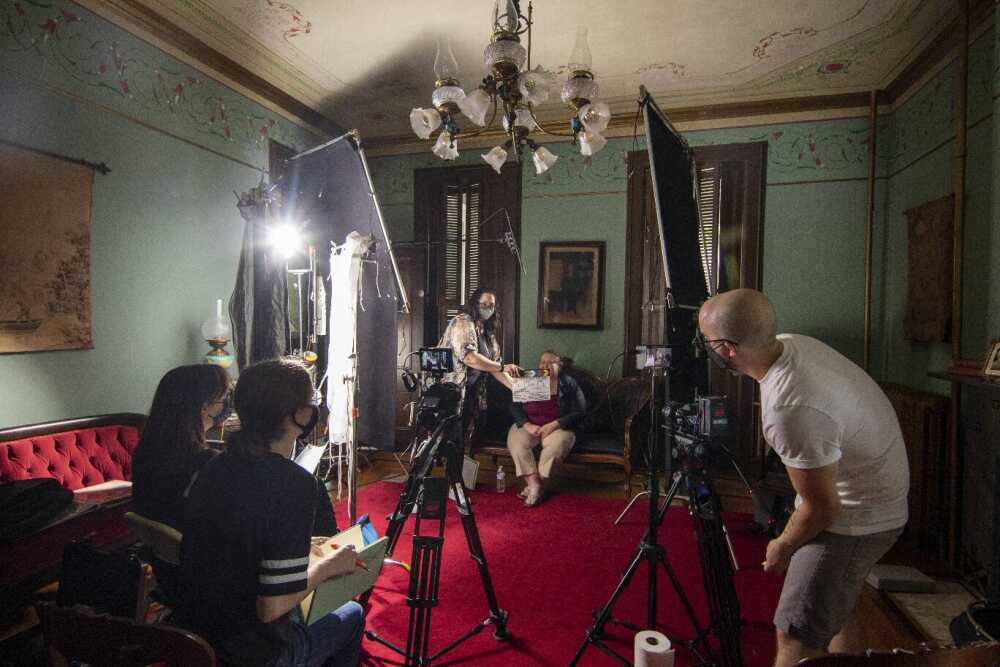 Evanna Milea, producer and SEMO alumni, slates a shot for “The Local Whisper” as the rest of the crew prepares to film an interview for their episode on Debroah Manning.
Photo submitted by The Local Whisper

Past SEMO mass communications students Regan Ernst, Jo Willenbrink and Evanna Milea have returned to Cape Girardeau to film a true crime documentary series titled “The Local Whisper.” The three met while taking TV/film classes and remained friends since their graduations in 2018 and 2019. Ernst, director of the project, said she wanted a team she trusted and knew well, so she chose Milea as producer and Willenbrick as co-director of photography, alongside Taylor Bevirt whom Ernst met at her job.

For their first case, Ernst thought they should start with Cape Girardeau, a place they know well and have connections to. Being from the Cape area, Ernst was familiar with the unsolved murder of Deborah Manning, a local woman found dead on the side of a road after leaving her parents’ house on July 4, 1983.

Once the story was decided on, the crew began the most difficult task: researching.

“It’s a big time commitment, especially with research,” Ernst said. “You want to do the story justice, so you try to get it from every angle that you can.”

Ernst said they have looked through arrest records, yearbooks, old articles and pictures; they have called Cape Girardeau County Archives, the courthouse, the Federal Bureau of Vital Records and anyone with connections to Manning.

“It’s hard to pick out who is important,” Ernst said of finding people to interview. “There’s lots of layers of people who knew this person, and they all might have different information on her life and her death.”

For Manning’s case, Ernst said they plan to interview 10 or less people, depending on where the story leads them and who is willing to talk. With every interview, the crew is hoping to focus not just on solving the case, but on highlighting Manning and who she was as a person.

“One of the questions [Ernst] asked that got me the most was, ‘What was Deborah’s favorite song?’” Milea said of a recent interview.

With future cases, the crew wants to continue focusing on the people involved and their stories, instead of getting stuck on the end of someone’s life or what happened to them.

They plan on devoting three episodes to Manning’s case and covering two more cases to complete the first season of the docuseries. For the most part, “The Local Whisper” is focused on true crime in the Midwest, but Ernst said they are open to covering “any story that doesn’t get the attention it deserves.”

Stylistically, the crew has a strong vision for what they want “The Local Whisper” to look like.

“We don’t want [the series] to be the classic ‘Dateline’ feel,” Willenbrink said. “We want it to be more stylized and special. Bringing that to light has been difficult, but we have such a great crew, they can do anything.”

Ernst originally thought they would release their series on Youtube, but now they are looking into selling “The Local Whisper” to a streaming service or entering it into film festivals.

“It’s less about selling it because of money and more about selling it ‘cause more people will see it that way,” Ernst said. “The whole point of the docuseries was to focus on stories that weren’t given a lot of media coverage. … We wanted to give a platform to those families and those people so they’re not forgotten.”