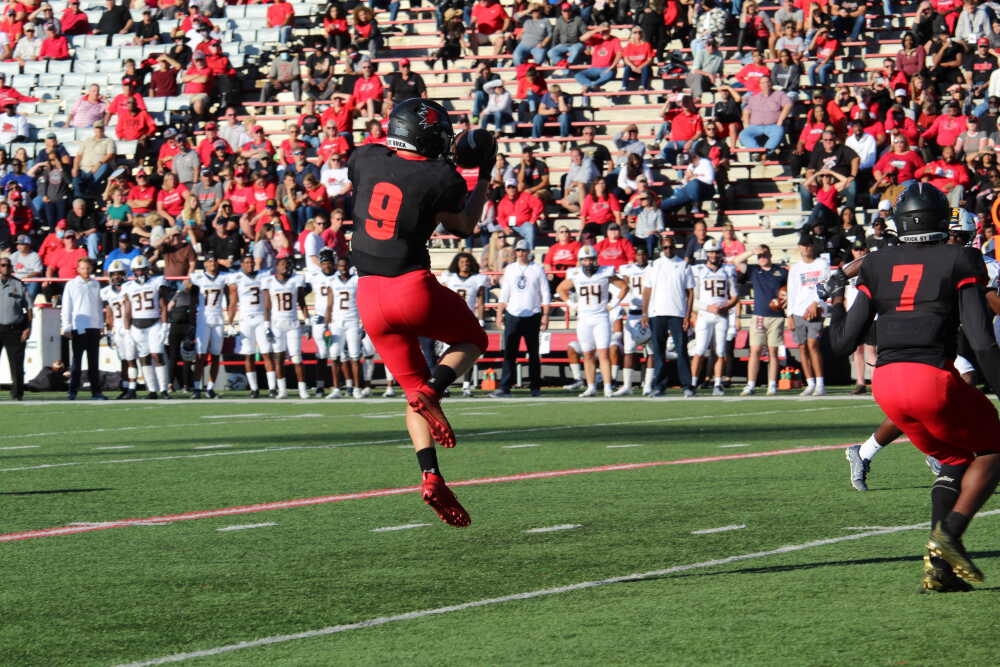 Graduate student Zack Smith makes a jumping catch during Southeast's game against Murray State on Oct. 16. The Redhawks fell to the Racers 32-31.
Photo by Kailyn Veach

The Redhawks had a lead of 16-31 going into the fourth quarter, but the inability to get the ball moving offensively gave the Racers the chance to come back. Murray State climbed out of their deficit and scored 17 points to defeat SEMO 32-31 on Oct. 16th at Houck Stadium.

Southeast came out and scored on their opening drive as Kenny Doak nailed a 40-yard field goal to put the Redhawks on top 3-0.

The Racers retaliated as redshirt freshman quarterback DJ Williams led the offense down the field, which led to Williams scoring on a 1-yard touchdown to make it 7-3.

When the Redhawks went back on offense, senior running back Geno Hess scored on an 11-yard rushing touchdown. Hess would go on to finish the game with 176 rushing yards on 22 carries followed up by two touchdowns. Hess became the 10th player in SEMO football history to have 2,000 career rushing yards.

Although Hess’ rushing performance wasn’t enough to help the Redhawks be victorious, he does not see the defeat as a total loss.

“I saw a great game from both sides of the ball for us,” Hess said. “Like what Coach [Matukewicz] said, we had a very good practice. At the end of the day, the game just didn’t go our way. Not because they beat us, but because that’s just how the game turned out.”

Although the Redhawks came out at halftime behind 16-10, the offense did not let up as they scored 21 points alone in the 3rd quarter. Junior quarterback CJ Ogbonna was credited with 2 of the 3 total touchdowns scored in the 3rd quarter. He rushed one in for a 5-yard touchdown followed by a 26-yard passing touchdown to Zack Smith.

Going into the 4th quarter, the Redhawks were up 31-16. The Racers wasted no time trying to climb out of their deficit and scored on a 16-yard receiving touchdown from Williams to redshirt freshman running back Domonta Witherspoon. The Racers would then score again on a 52-yard punt return touchdown to bring the score to 29-31 with under twelve minutes left in the 4th quarter.

Both teams would remain silent on offense until the Racers marched down the field and redshirt junior Aaron Baum nailed a 35-yard field goal to win the game for Murray State.

After the tough loss, the Redhawks head football coach Tom Matukewicz began to eye the next time they match up against the Racers.

Junior defensive lineman Lunden Manuel said the defense was still keeping the same plan after giving up back-to-back touchdowns to the Racers in the beginning of the 4th quarter.

“Nothing really changed,” Manuel said. “They had some good plays, not to take anything away from them as a team. They got us on some plays cause the quarterback got out and scrambled a little bit and made some plays for them. We will see them again though, so we’ll be better next time.”

Although Manuel and the Redhawks want to seek out a win against the Racers, they look to shift their attention toward their next opponent as they travel to Martin, Tennessee and face UT Martin on Saturday October 23rd at 2:00 p.m.