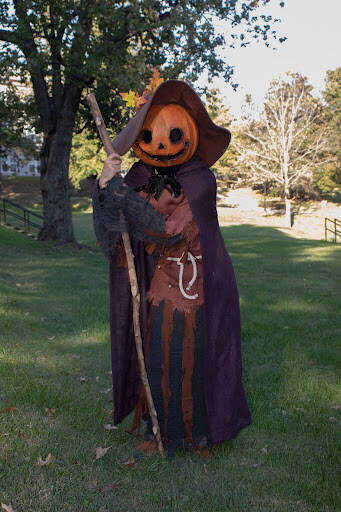 What does Halloween look like to you? Do you picture witches or warlocks, ghosts or ghouls? 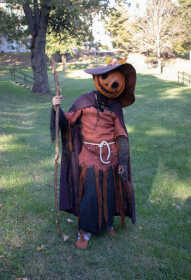 “I see him as a mischievous spirit or deity type thing with a lot of folklore inspiration,” Taylor said.

He put care into the costume because he said he wants to give life to the holiday by giving it its own mascot.

“It always bugged me growing up that Halloween never had a specific mascot,” Taylor said. “You know, Christmas has Santa Claus, Valentine’s Day has Cupid and Easter has the Easter Bunny.”

Taylor didn’t want to portray Halloween using the typical monsters, vampires or witches. He decided to create a pumpkin-headed figure wearing tattered burlap and flannel, a white belt with bells and a neck full of crow feathers.

“I wanted him to have an old, folkloric and almost mythical feel to him like something out of the 15th or 16th Century,” Taylor said. “Something that the village children would be whispering about all Hallow’s Eve.”

Beyond the character's ancient and mysterious appearance, Taylor said he wanted the costume to embody the festive nature of Halloween. He included a crown of leaves atop his hat and a belt of noisy bells.

The pumpkin head is made of paper-māché and plaster, with padding inside for Taylor’s head. He said it took a week and a half to complete the full pumpkin. 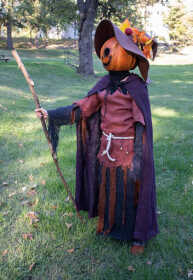 For the bottom piece of the costume, Taylor cut flannel shirts into strips and used burlap potato sacks for the top piece. He tops it off with a cloak from one of his previous costumes, a Cthulhu cultist, someone who believes Cthulhu will either create chaos and violence or will wipe out humanity and painlessly slay cult members.

Taylor has been hand making costumes for more than 10 years, so he wanted to complete this one as seamlessly as possible.

“Thankfully, I didn’t have to sew once,” Taylor said. “I managed to do it using mainly adhesives, hot glue and double-sided tape.”

When reminiscing on past Halloweens with his family, Taylor remembers the fun they had together when preparing for the holiday.

“Growing up, I was always so fascinated by the costumes and the idea that you can go out and be whoever you want to be for a full night,” he said.

He remembers the enchanting feeling of Halloween and the homemade costumes his parents and siblings used to make together.

“[My parents] went to the store and bought some white sheets, put them in buckets of tea and coffee to stain them, then tore them by hand into strips and wrapped my brother and I up,” Taylor said. “I thought I looked like a real-life mummy.”

Be on the lookout for the Spirit of Halloween around campus on and before Halloween. Perhaps you’ll get a treat from the festive fellow himself!