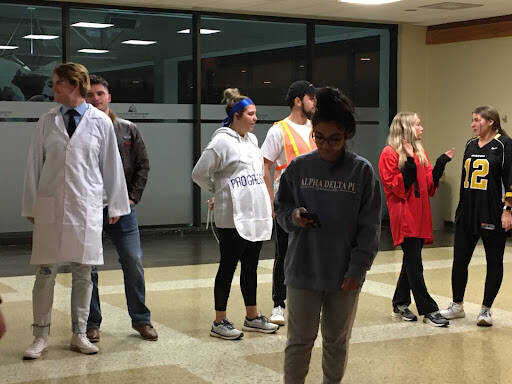 SGA members mingle after the Nov. 1 meeting, many in costume to celebrate Halloween.
Photo by Lizzy Stock

Among the topics discussed at the Student Government Association (SGA) meeting Nov. 1 were a budgeting situation, the addition of several student organizations and a new rule about executive committee members’ ability to vote.

A situation involving film rights was discussed at the meeting. Benji Arrigo, representing the United States Institute of Theater Technology (USITT), approached the funding board committee seeking funds to cover the film rights for their Oct. 28 showing of Rocky Horror Picture Show. Arrigo said the request was delayed until after the showing due to several factors that were out of USITT’s control.

“I want to emphasize that I find the return on investment to be sufficient for Student Government support,” Arrigo said.

SGA voted unanimously in favor of providing the funding to USITT. Many members, including Senator Anna Carpenter, agreed the event was a fun opportunity for students and had a great turnout from both River Campus and the main campus.

“I know they put a lot of planning into this. It’s not very often an organization has to come back and ask for reimbursement, but I think this is a really good example of why we should reimburse them, because it was a very successful event,” Carpenter said.

There was also a unanimous vote to amend the Executive Board bylaw to add “Executive Committee members will not vote during Senate meetings.” The senators found this to be a logical and necessary addition.

Near the end of the meeting, parliamentarian Luke Collins announced the Esports team, which has approximately 650 members, now has a full-time staff member employed by the Student Recreation Center to help with the team.

SGA meetings take place in Room 414 of the University Center at 8 p.m. every Monday. For more information, visit their website.