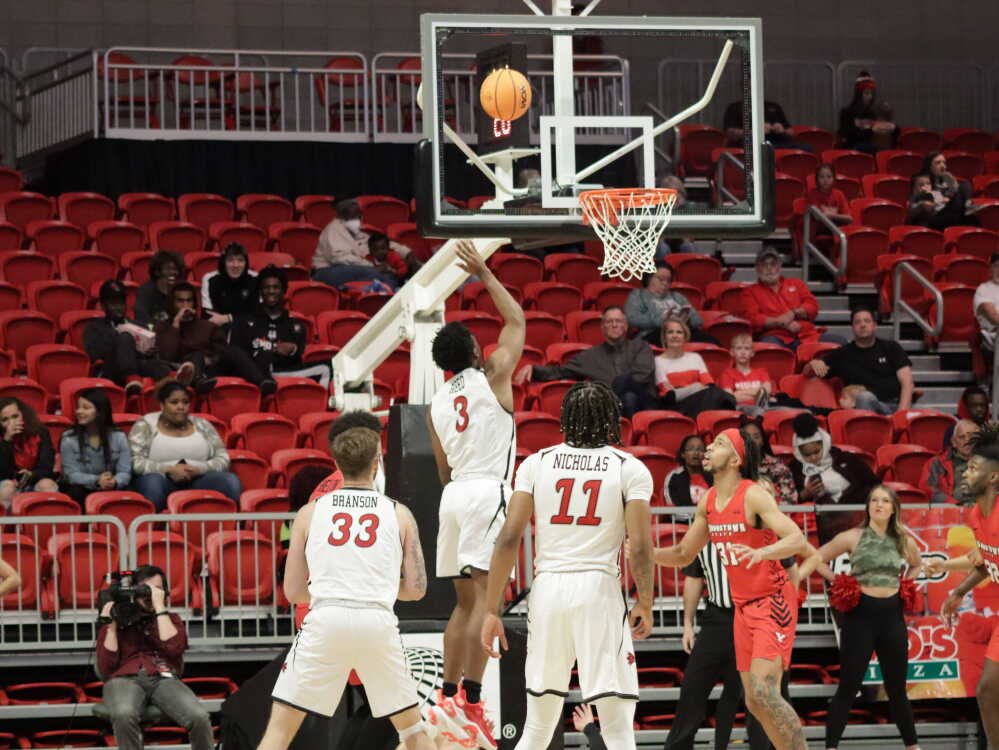 Junior guard Eric Reed Jr. goes up for a layup during Southeast's 97-79 loss to Youngstown State on Nov. 13 at the Show Me Center in Cape Girardeau.
Photo by Kailyn Veach

In a game that saw 56 personal fouls between Youngstown State and Southeast Missouri State, the Redhawks dropped their home opener 97-79.

The Redhawks fell behind early as Youngstown State opened up the game with an 11-0 scoring run. However, they were able to battle back and take a 39-37 lead going into the half.

Playing a physical Youngstown State team the Redhawks and head coach Brad Korn found themselves battling the whole second half.

Youngstown State was led by senior guard Tevin Olison on the offensive side of that ball as he shot 9-for-16 from the floor and 4-for-7 from behind the three point line scoring 27 points. For the Redhawks both junior guard Eric Reed Jr. and sophomore guard DQ Nicholas had 17 points each.

Korn said he has seen some productivity from his bench in the first two games with Nicholas providing that spark off the bench.

“DQ’s played in a ton of games before so I feel we have great depth that's positive to us and just to me that it means that these guys aren't caught up in all that stuff.”

Reed Jr does not want the team to use fouls as an excuse for the results of the game.

Junior guard Nygal Russell said that there are positives that this team can take from this game moving forward.

“We're starting to see everybody kind of flourish and see what they can become,” said Russell. “With our roles kinda being a little more defined, knowing that Eric Reed is going to come out and attack and he's going to set that same tone every game. I felt that was definitely the positives. I do feel like in the first half, we played alright, like there were flashes where we saw how we could have taken over like when they took that lead and we took it back.”

The Redhawks will be back in action when they host Arkansas State on Nov. 19 at 6:30 p.m. at the Show Me Center in Cape Girardeau.