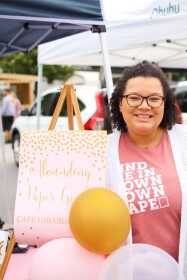 Oliver grew up in O’Fallon, Mo., and moved to Cape Girardeau to pursue a bachelor’s degree in psychology. Oliver said she gravitated towards psychology because she wanted to help people and “do life with people in their darkest times.” After she graduates this December, Oliver wants to become a developmental disabilities community specialist, which requires a master’s degree and experience in mental health counseling.

Oliver’s art career began in high school after a teacher commented on her beautiful handwriting. The teacher, pregnant at the time, asked Oliver to write something on the walls of her future daughter’s bedroom. After completing the project, Oliver discovered her love for art and began pursuing hand lettering and calligraphy. 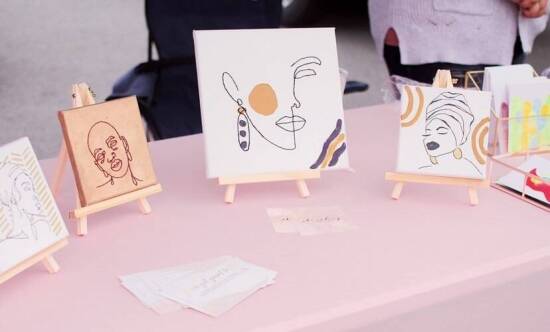 Kaleigh Oliver’s artwork displayed for purchase at a farmer’s market. Most of her artwork is sold online or commissioned out, but she plans on attending more art shows and markets in the future.
Photo by Peyton Henson

Around 2018, Oliver painted an old Bible for a friend and continued the practice by purchasing Bibles at Goodwill to repurpose and paint. Her favorite part of painting Bibles is seeing them “have a new life and be used again.”

During the pandemic, her artistic interests expanded to embroidered canvas painting after appreciating similar work on social media. With Oliver’s embroidered paintings, she starts by sketching an outline on the back of the canvas before adding paint to the front and following her outline with string. Almost all of her embroidered paintings depict outlines or profiles of anonymous women, some inspired by women she knows and others inspired by women in artwork she admires.

“[I paint women because] I think that women are awesome. I love that we’ve come to a point in society where we’re like, ‘OK, women are cool.’ We can now empower people instead of fight for the upper hand all the time,” Oliver said.

Oliver also began designing stickers during the pandemic, which are available to purchase through her RedBubble account, kaleigholiver. The first sticker she created was based on her old, personal Bible, and Oliver described the design as “teal, cringey and a little 2013.” She continued creating faith-based sticker designs, though, some depicting Bible verses and others including simple phrases promoting kindness such as “be a kind human” or “choose kindness.”

“[My sticker designs] included a lot of things that I felt like I was lacking personally, and what the world was lacking at the time,” Oliver said. “Obviously, a sticker is not going to fix anything in the world, but the message behind the sticker will.”

One particular sticker design on Oliver’s RedBubble account incorporates graphic hands using American Sign Language to hand spell the phrase “Saved by Grace.” Oliver said she used ASL at her past job as a behavioral therapist and when assisting deaf clients at Hobby Lobby. She created the sticker as a way to “tell them the good news” while also “giving them something that is their own.” Someday, Oliver hopes to become fluent in ASL, but for now, she communicates with basic conversational skills and hand spelling.

Psychology student Kaleigh Oliver poses for a picture. Oliver graduates in December of 2021 and plans to merge her interests of art and psychology to do what she loves most — helping people.
Photo by Peyton Henson

Oliver’s Christian faith is important to her and inspires much of her artwork. Growing up Christian, Oliver said she had “a lot of head knowledge about Christ” but didn’t know who Christ was in her own life yet. When she arrived at SEMO her freshman year, Oliver struggled with mental health issues and described herself as broken.

She eventually joined a campus ministry, Campus Outreach, with her roommates and suitemates. They attended a New Year’s conference where Oliver said she came to Christ, citing her best friend and current roommate, Allison Wankum, as a major influence.

“She really shared the Gospel with me in a way that was real, in a way I hadn’t heard before,” Oliver said. “My life has changed completely and doesn’t look or feel how it used to be.”

With art, psychology and everything else she does, Oliver’s main goal is to help people, and in the distant future, Oliver said she would like to open a shop for small artists to display and sell their work. 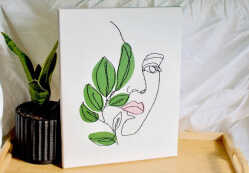 “There’s nothing in the works for that at all, but I’d love to do it,” Oliver said. “If psychology just doesn’t work out, I guess I’ll abandon everything and open a shop.”

View Oliver’s artwork on Instagram or purchase her stickers on RedBubble.