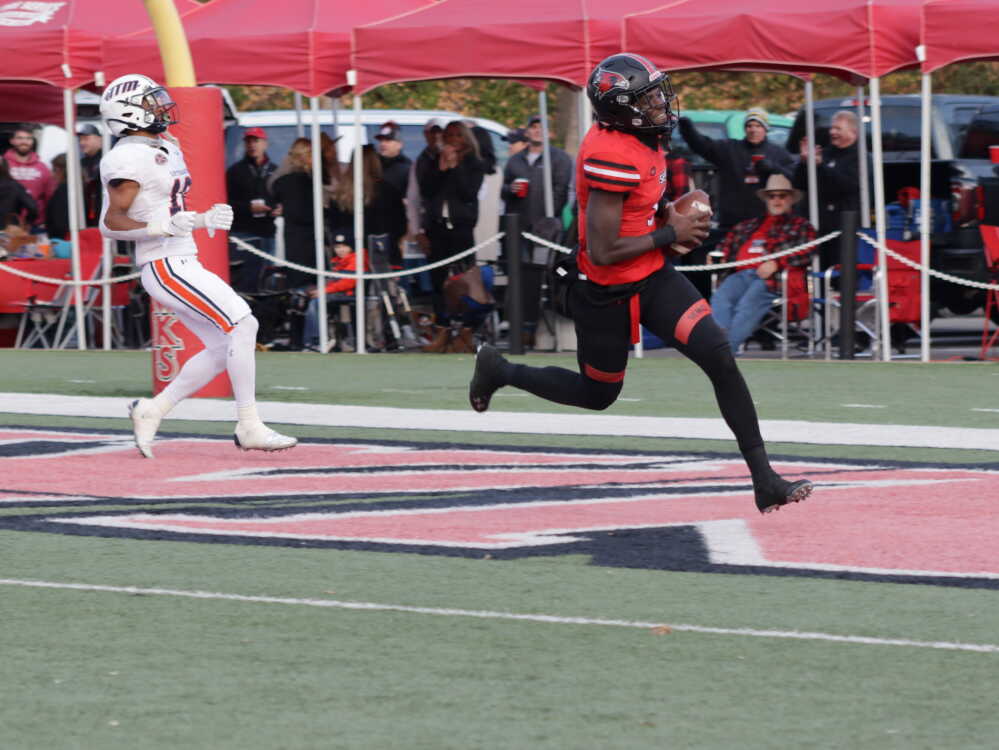 Junior quarterback CJ Ogbonna runs in a touchdown during the Redhawks' game against the UT Martin Skyhawks on Nov. 20. Southeast brought home the win 31-14.
Photo by Kailyn Veach

The Redhawks came out on top with a 31-14 victory in a matchup against the eighth ranked University of Tennessee at Martin Skyhawks in their last battle of the season on Nov. 20 at Houck Stadium.

In the teams’ last matchup four weeks prior on Oct. 23, the Skyhawks took the win 38-30 at Hardy M. Graham Stadium in Martin, TN. Coming into the second matchup at Houck, Southeast knew they had to play a different ball game to come out on top.

Southeast’s defense shutdown the Skyhawk offense in three of the four quarters with all 14 points for the Skyhawks being scored in the second quarter.

“Defensively, we were just trying to make them earn it,” Southeast coach Tom Matukewicz said. “We gave up some big plays and some easy scores the last time we played.”

Senior inside linebacker Brandon Mincey led the Redhawks defense with seven tackles, two tackles for loss and a sack. Senior defensive lineman Bryson Donnell and senior outside linebacker Omardrick Douglas also added six tackles each. Douglas chipped in a forced fumble and a sack in the contest as well.

The sole interception by the Redhawks came from senior cornerback Shabari Davis in the third quarter.

“We just locked in more,” Mincey said. “We focused on our assignment, and at the end of the day it took care of itself.”

On the offensive side, the Redhawks went for 412 total yards while the Skyhawks only had 278. Junior quarterback CJ Ogbonna threw for 205 yards and three touchdowns on 14-for-25 completed passes. Ogbonna also ran for 74 yards and the only rushing touchdown of the game for the Redhawks.

“Coach McDowell had a good plan for the offense,” Ogbonna said. “The o-line blocked well, the receivers caught well, and the running backs ran so it wasn’t really me; it was them.”

Two of the junior quarterback’s three touchdown passes were to sophomore slot receiver Terrell Jester. His first one came right before halftime, and it was the first of his career. The second touchdown came in the third quarter.

“He went from what is his name, to a signature name,” Coach Matukewicz said about Jester. “He’s not the biggest guy, but I’m proud of his progress and I’m excited to watch him play.”

Jester said going out and working hard everyday helped him have the performance he did today. In addition to his two touchdowns, he finished with 47 passing yards on four catches and two rushing yards.

Terrell Jester was just one of the six receivers with one or more receptions in the game. Senior wide receiver Johnny King led all receivers with 79 yards on four catches.

“Offensively it’s just about trying to keep the drives alive, and our offense played really well,” Matukewicz said. “It was just a great team win, and I can’t really say ‘Oh, this player or that unit.’ Really, it took all of us and we did a great job.”

Southeast also honored their 21 seniors at the game and capped off their 2021 season with a 4-7 overall record and a 4-2 record in Ohio Valley Conference play.