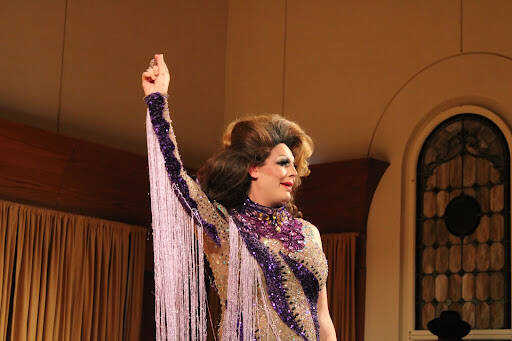 Trinity St. Moore poses during a performance where she lip syncs to the song “You Are The Best Thing That Ever Happened To Me'' by Gladys Knight. The purple costume is one of the many she wore during the show.
Photo by Emma Kratky

On a chilly night, music permeated the air as the stage of Shuck Recital Hall was filled with color, choreography and drag queens for the first time ever.

The performance took place Friday, Nov. 20. An array of drag queens from Independence Place, a local gay bar, performed a total of 19 acts with a variety of different costumes and music, taking advantage of the amount of space they had onstage.

Although many of these queens had performed on campus before, the performances took place in the University Center or other non-performance-based buildings.

Former Miss Indepence Place Naomi Price was excited to finally be able to perform in a real recital hall.

“We have a legit stage — normally, it's just flat ground, which is nothing special,” Naomi Price said.

Price performed a total of three acts, all with intricately-designed costumes. 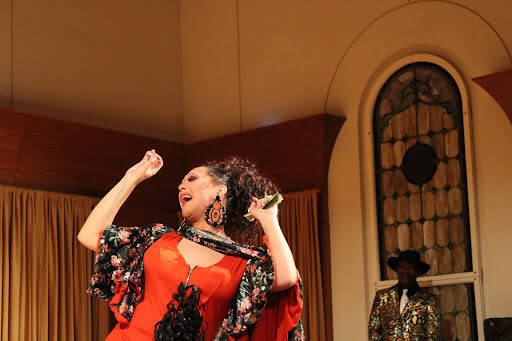 Naomi Price lip syncs to “Ain't Got Far To Go'' by Jess Glynne. Maurice Carter watches in the background following his lip syncing performance to “U Got It Bad” by Usher.
Photo by Emma Kratky

She has been in the drag community for 11 years and was first introduced to drag by her ex, Sasha Moore. Price said she enjoys being a drag queen due to the entertainment it provides others.

“It’s a legit reason to be a clown and make people laugh,” Price said. 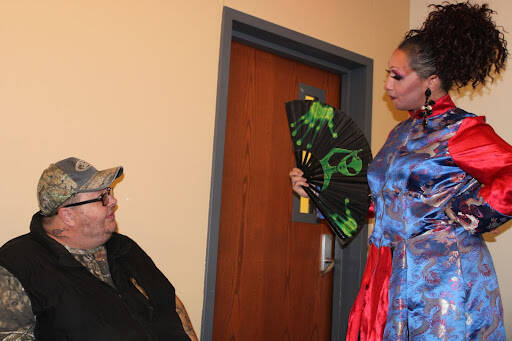 Sasha Moore and Naomi Price talk before the show in a dressing room below Shuck Recital Hall. Although Moore is not on the performance list, they still advise many of the queens before the production.
Photo by Emma Kratky

Former Miss Indepence Place Sasha Moore, has been both a drag mother and a “gam gam” to many of the performers. Both terms refer to the apprentice and mentor relationship Moore has with other queens.

She has been involved in the drag community for more than 25 years and is one of the longest-running performers currently at Independence Place, a gay bar. Moore has earned many titles alongside her Miss Indepence Place title, including Miss River City 1997, Miss SEMO ANS Classic, and Ms. Springfield EOY 2000.

“For me, being a female was an outlet to entertain; I could never get on stage as a boy,” Moore said. Moore is proud of the contributions she has provided to the local drag community. “I’ve built a family, I’ve built a dynasty of entertainers. I’ve had state title holders within my family.”

One of the mentioned title holders is Trinity St. Moore. She was the winner of Mrs. Cape Pride 2021 and has won many other titles, including Miss Gay River City 2010, Miss Indepence Place 2013, and Miss Gay Cape Girardeau 2017. During the drag show performance, she was one of the emcees. Her stage presence was filled with drama and comedy.

“I’m sweating like a drag queen in church,” St. Moore said during the show. 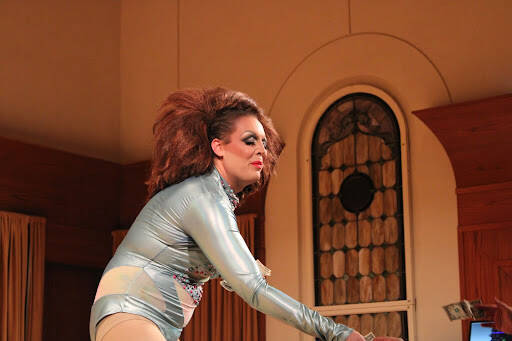 Trinity St. Moore accepts a tip from an audience member. Tips were collected by all performers in between moments of their performances.
Photo by Emma Kratky

Another drag queen who was most definitely breaking a sweat was current SEMO student, UltraViolet. During the show, Maurice Carter, another emcee, stated UltraViolet did not want to speak to the press. Instead, she let her performances speak for her. 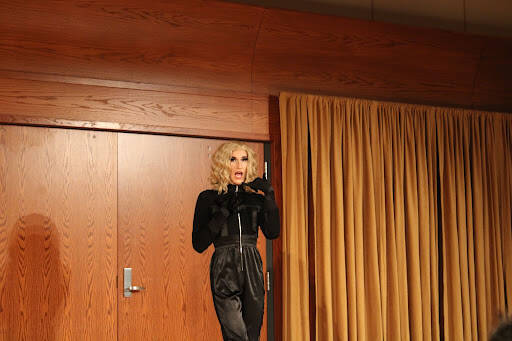 UltraViolet lip syncs to “Telephone'' by Lady Gaga ft. Beyonce. She performed many stunts during the performance, ending the act with a cartwheel.
Photo by Emma Kratky

A former Mr. Cape Pride winner, Maurice Carter was a spokesman during the drag show. He performed four acts, one of which was a duet with Trinity St. Moore.

Carter has been involved in the drag community since 1993 and was first roped into being an emcee for Independence Place by pure coincidence.

“I had been to Independence Place probably two or three times, and the show director did not show up for the show I was at, and one of the bartenders said, ‘You have a good speaking voice.’ He said, ‘We need an emcee,’ and handed me a microphone,” Carter said.

After that, Carter and Moore began to work together at another bar, but eventually transferred back to Independence Place and have remained there ever since.

While Carter does not dress up in drag, he dances and lip syncs to songs in the same manner as the other drag queens. He has won many titles through his performances including Mr. Realities 1996 and Mr. Independence Place 1997. 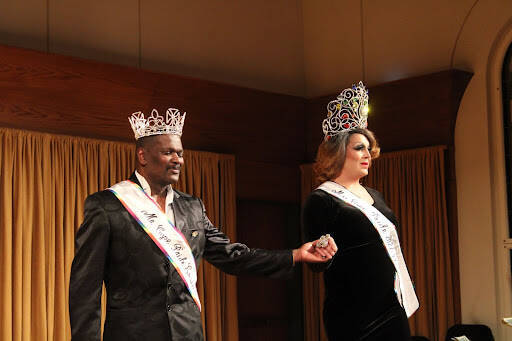 Maurice Carter and Trinity St. Moore hold hands during their duet of the song “Perfect” by Ed Sheeran. Both were winners of the Cape Pride title, and their sashes showcased the years they won, 2020 and 2021, respectively.
Photo by Emma Kratky

All of the queens involved in the show highly encourage any students who are interested in drag to participate in the local community.

“If you’re interested, get a hold of any one of us, and we’d be glad to help you start,” Price said.

If you’d like to visit any of the queens mentioned in the story, they hold performances on Thursdays, Fridays and Saturdays at Independence Place, located on 5 S. Henderson St. in Cape Girardeau.