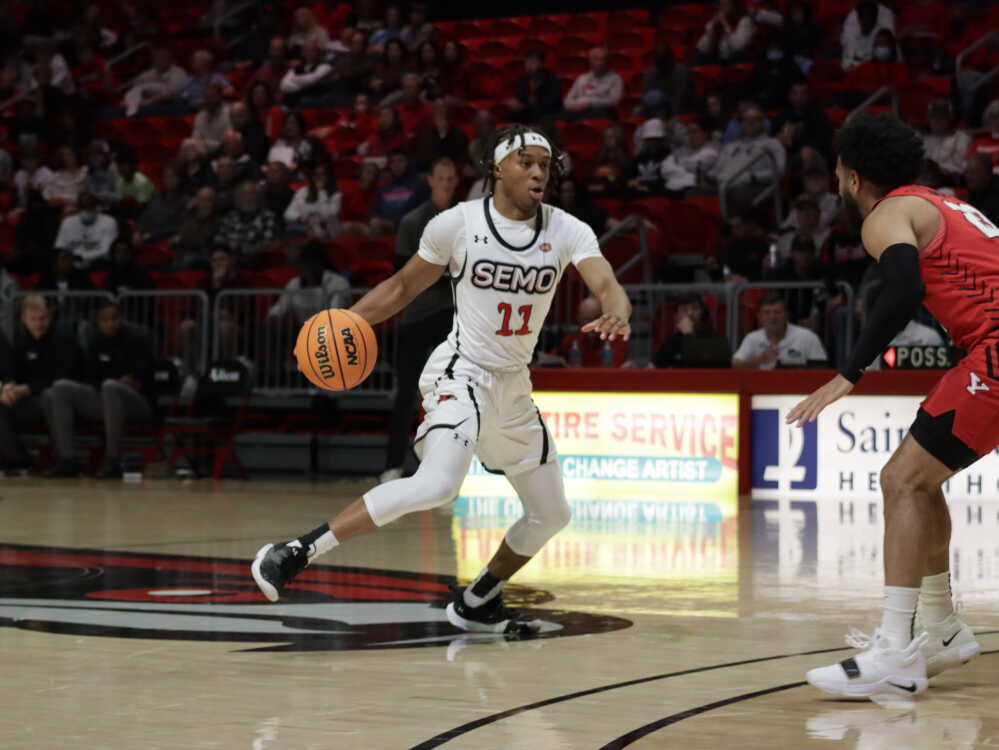 Sophomore guard DQ Nicholas handles the ball during SEMO's 97-79 loss against Youngstown State on Nov. 13 at the Show Me Center in Cape Girardeau.
Photo by Kailyn Veach

The Redhawks men’s basketball team picked up their first win of December with a 76-64 win against Webster University on Dec. 4 at the Show Me Center.

SEMO went on the road to a tournament at the University of the Incarnate Word in San Antonio, Texas last weekend where they went 1-2. Southeast coach Brad Korn said getting back on the right track at the start of a homestand was important for his team.

“We really tried to focus on the things that had been causing us some problems early in our other games, like rebounding and fouling,” Korn said. “We really focused on just trying to keep it as simple as possible and trying to focus on competing against the game of basketball and not just against Webster to win the game.”

At halftime, the Redhawks had just a three point lead: 34-31. The Redhawks then outscored the Gorloks 42-33 in the second half. Junior guard Eric Reed Jr. led the way in pulling the game away from Webster with 15 second half points, knocking down four out of his five total three-pointers.

The Redhawks used were also propelled by senior center Manny Patterson who said Southeast did a good job of controlling the rebounding margin.

“We were just a presence, and we controlled the paint,” Patterson said. “We controlled the glass, and the second half we came out much better and as a unit like we were supposed to.”

Patterson was the Redhawks’ second leading scorer today as he nearly chipped in a double-double with 14 points and nine rebounds. Nygal Russell also pitched in 11 points, and DQ Nicholas added 10.

Korn said just being able to get good shots and hit them, especially from the three-point line, is what helped his team out offensively after they realized their inside game hadn’t been working as much.

The win over the Gorloks moves the Redhawks to 4-4 overall. The Redhawks will be back in action in Cape Girardeau on Dec. 8 to face off against Evansville. Tip-off is set for 6:30pm at the Show Me Center.