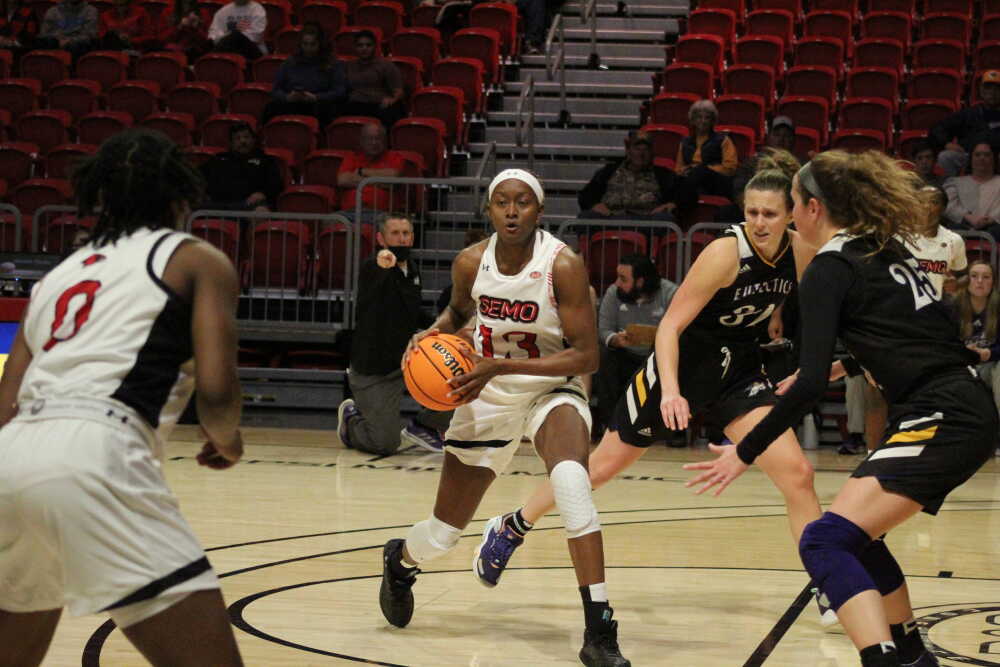 Senior guard Deanay Watson passes the ball to the corner during Southeast's 68-45 win over UHSP on Nov. 9 at the Show Me Center in Cape Girardeau.
Photo by Kailyn Veach

The Redhawks women’s basketball team defeated Harris-Stowe with a score of 95 - 57 on Sunday, Dec. 5 at the Show Me Center.

SEMO’s offense was kicked into high gear as everyone on the roster walked away with at least three points.Senior guard Deanay Watson led the Redhawks with 23 points and 11 rebounds in the winning effort.

“We practice that and we’re just getting better,” Watson said. “Us practicing it is leading over to the games.”

“We know we can run the floor. We’ve got guards that can make good decisions. We’ve got post players that can catch and finish and we can create turnovers that allow us to play that way,” Patterson said. “We’re not just taking the ball out of the net from a made shot that slows us down. So really proud of our defensive intensity that turned good defense into good offense.”

The Redhawks defense excelled in the second quarter, only allowing Harris-Stowe to score six points and ending the half leading with a score of 48 - 20.

The entire game saw physical plays from both SEMO and Harris-Stowe with players taking big hits and hard falls. Patterson took notice of the physicality over ball possession throughout the match.

“We know that their post players are going to be physical. They try to go into them early. We know that we are undersized and we have to do our work early, but I thought they did a good job of not backing down to the physical play and not getting out of control,” Patterson said. “I was proud of their fight. When you look at us, we’re not going to look like a physical team. But it is good to know that we can play that way when we need to.”

“I think we were stronger,” Smith explained. “We went out there and played hard and outworked them.”

SEMO will be transitioning into Ohio Valley Conference play when they take on Murray State on Dec. 30. Patterson said she is aware of improvements the team can have before the conference play stretch begins.

“Defending without fouling; we can’t put someone on the line 41 times and expect to win,” Patterson said. “But just that effort, passion, and competitiveness that you have to have when you step on the floor. It looked good tonight.”

The Redhawks will take on Purdue Fort Wayne on Dec. 9 at the Show Me Center.