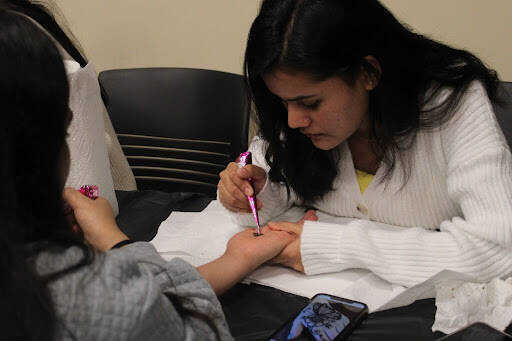 A student applies a henna tattoo to another person, copying a design from her phone. Although she is not Muslim, she said henna is very important in Nepali culture, and she enjoys sharing it with others.
Photo by Emma Kratky

Laughter, multicultural discussion and the smell of traditional dishes filled the air of the University Center Ballroom for the Muslim Student Association Dinner and Henna Night Dec. 3.

Both students and families from the Southeast Missouri Muslim community gathered together to celebrate Muslim culture. The Muslim Student Association attempts to hold one or two of these events each semester in order to teach about and encourage the presence of the Muslim community in Cape Girardeau.

President of the Muslim Student Association Shahd Osama is proud to be a part of Cape Girardeau’s Muslim community, sharing her religion and culture.

“I am an international student, and I did not know that there was a Muslim community here. I didn’t even know there was a place to pray,” Shahid said. “So, I feel like this dinner tells people, ‘You’re not the only Muslim here.’”

Near the front of the room, a presentation showcasing facts about Muslim and Islamic culture was projected onto a large screen. 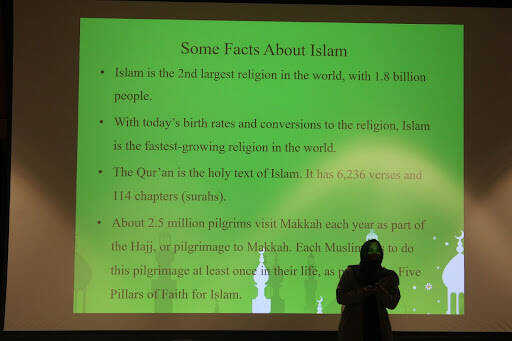 Shahd Osama stands in front of the projection screen, speaking about the information at hand. The slides changed to present different information, including the number of Muslims in the world, the pillars of Islam and more.
Photo By Emma Kratky

At the back of the room, a table was set up with pamphlets, the Quran and artwork. All of the information was free to look at and learn about, in hopes to further educate attendees about the Muslim community. 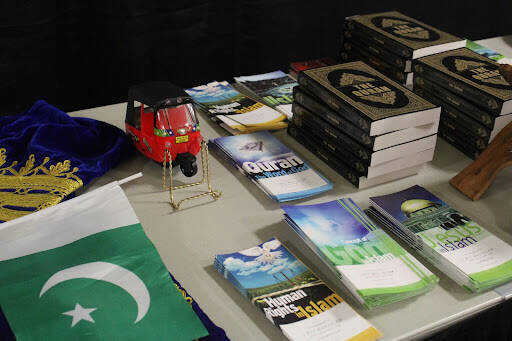 A table holds flags, pamphlets and copies of the Quran. Some of the topics of the pamphlets ranged from human rights in Islam to women in Islam.
Photo by Emma Kratky

Muslim Student Organization officer Shadan Roumany felt it is important for SEMO to have a strong Muslim community on campus.

“I felt like there was a need to bring the international students we have on campus together in one area, and this is food they are only going to get from this event; they miss what they usually eat at home,” Roumany said.

There were many different cultural dishes offered like biryani rice and chicken curry, as well as different types of chicken, noodles and salads. It provided a chance for those who are new to Muslim culture to try the cuisine, while also providing a familiar meal to those who have tried the dishes before.

Speaker, assistant teacher, and graduate student at SEMO Mohamad Aldarawamy. He is Muslim and said he feels SEMO is a very accepting place to both experience and learn about Muslim culture.

Aldarawamy acted as the emcee for the event. He often asked if everyone was having a good time and enjoying the food. Since he is a foriegn exchange student, he said he has lived through the challenge of being accepted as a Muslim man in Cape Girardeau’s community.

“Having quality time with other members of the community and sharing this experience with people from the outside helps them in getting to know Muslim people and culture, and that is really important,” Aldarawamy said.

In the corner of the ballroom, students offered henna tattooing for guests. A small number of artists set up stations where anyone could sit and receive a henna tattoo.

Henna artist and international student Shiwani Pun spoke about how henna is integral to her culture, even though she is not Muslim.

“We are following the trend set by our ancestors, and it is something we can pass on to future generations. It is also important for marriage ceremonies, as well. If the bride's henna is bright enough even after washing it off, then it is proof that her husband loves her, and it is a way to represent that love,” Pun said.

With time, the Muslim Student Association hopes to continue to grow, in order to further educate both SEMO students and Cape Girardeau about their culture.

If you’d like to learn more about the Muslim Student Association, you can visit the organization’s website.