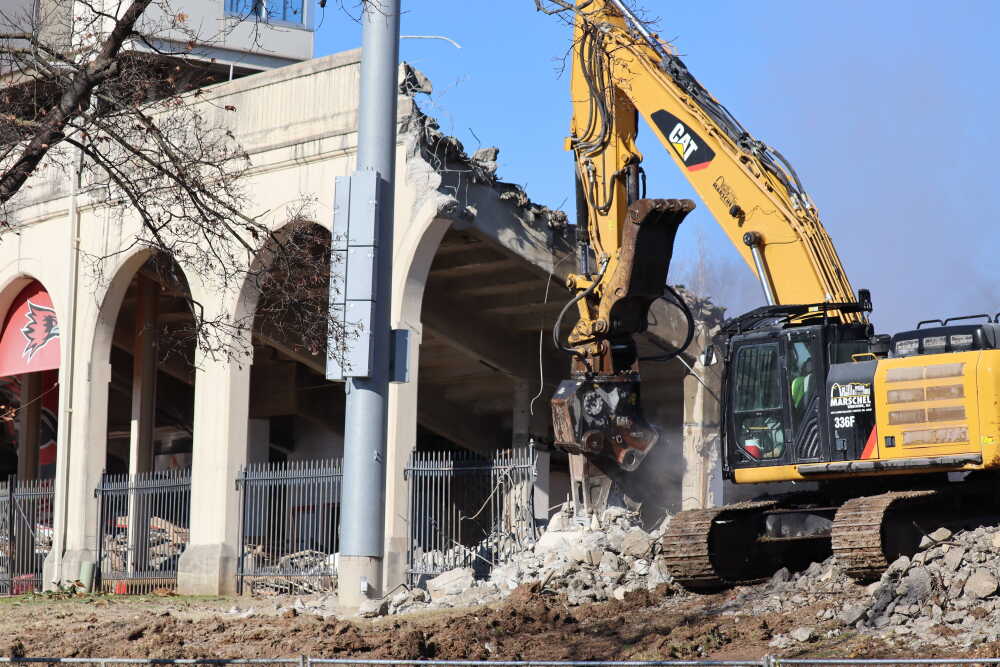 On Dec. 8, crews began demolition of the aging south bleachers of Houck Stadium. A complete renovation of the south side is planned for 2022.
Photo by Nathan Gladden

The demolition of Houck Stadium began Wednesday, Dec. 8, signifying the end of almost 100 years of Southeast history. The construction started at approximately 9 a.m. and continued until approximately 5 p.m.

The renovation of the stadium was originally approved at a Board of Governors meeting Sept. 24, 2021, spurred by safety concerns about the aging concrete. The first phase of the project includes demolition of the existing south grandstand structure and construction of a new seating area, with restrooms and additional concession areas. Director of Athletics Brady Barke stated they plan to finish this phase before the start of the 2022 football season.

Joey Rodriguez, construction worker at the site, estimated the construction will continue for approximately four weeks. He said the demolition started on the end of the stadium closest to the parking lot and will move toward the field house, which will be a little more tricky to demolish due to electrical work that needs to be done inside.

Rodriguez described the process of tearing down the stadium and the machinery used.

“They’re called chippers — they grab ahold of the concrete and chomp it down, and that way they can haul it out with the trucks. And then they use all this concrete again,” Rodriguez said.

With the prolonged construction process, there are some concerns about the noise level. Tony Torpea, a resident assistant at Southeast, said he wonders why the construction couldn’t have started a week later, after students are done studying for finals. Students in Vandiver, Merick and Meyers — the dorms near the construction — will likely be affected most.

“It could definitely affect somebody’s grades, or it could affect sleep, depending on when they do it,” Torpea said. “It just seems like bad timing.”

The start of the demolition marks the end of an era, and soon the beginning of another one, with a new and improved Houck Stadium.