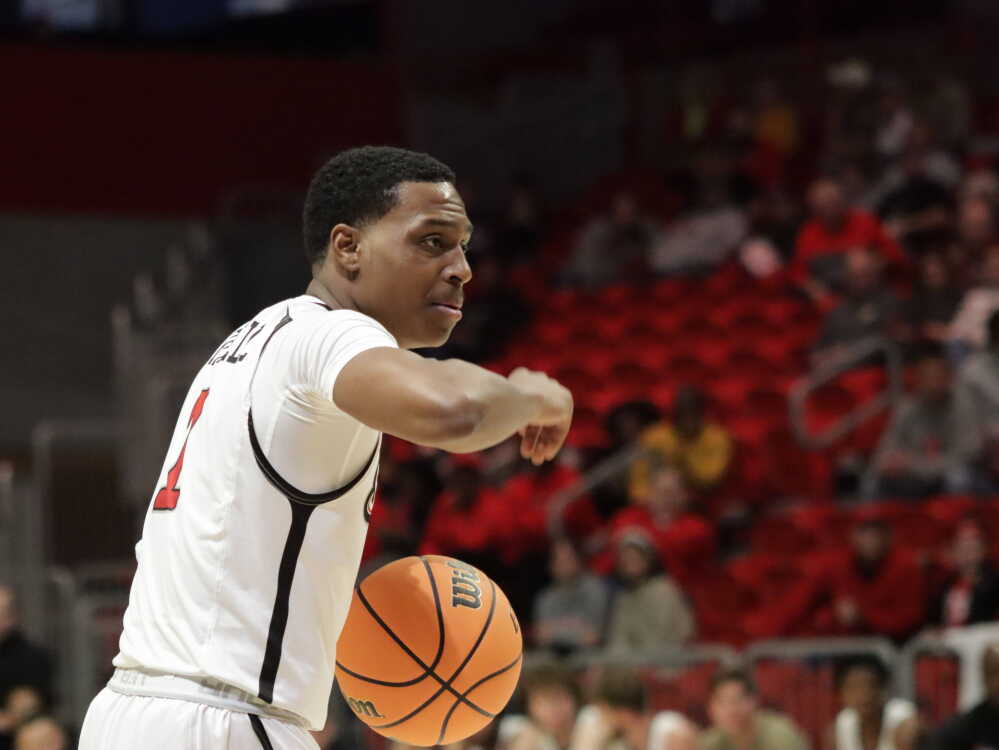 Freshman guard Phillip Russell talks with an official during SEMO's 97-79 loss against Youngstown State on Nov. 13 at the Show Me Center in Cape Girardeau.
Photo by Kailyn Veach

In a game where the Redhawks had less than half of their roster available due to non-covid illness, they were able to squeak away with a 75-73 win against Evansville on Dec. 8.

Freshman guard Phillip Russell led the team in scoring with a career-high 24 points. He also tied with redshirt junior Chris Harris for the team lead in assists with four. Fourteen of Russell’s 24 points came in the first half as he paced the Redhawks offense.

“Yeah they tell me I’m like the motor,” Russell said. “So I try and hold everyone to that and that’s really my game.”

It was a complete effort from the whole team as six of the seven players scored and three were in double digits. Redhawks head coach Brad Korn said he was proud of the way his team came out and battled Wednesday night.

“I'm just extremely proud of our guys because again, you really see what you're about character wise when you're in these types of situations, and we didn't make excuses,” Korn said. “We found a way to win the game and I think it can bring us together even more, get us connected even more than we've been. That's why these games are so important. That's why I was proud of our effort and resilience tonight.”

On the defensive side of the ball, Nygal Russell had 11 rebounds in the first half. He finished with a team and career-high 15 rebounds which made up just under half of the teams total rebounds (33).

“I guess you know with me being a senior I was trying to find a way to help us win,” Russell said. “If it's rebounding or defensive, whatever it is. I'm just going to work on getting that and today I was going after them and they came my way and it worked out for the better.”

The Redhawks also shot 12-13 from the charity stripe with the lone miss coming late in the second half. The team works on free throws after tough drills during practice.

“He tries to get us when we are tired to make it more game-like,” Harris said.

In a game without Eric Reed Jr., it took a complete effort from everyone to get the win. However the team had full confidence going into the game.

“We know what we got, all we got is all we need. So we know obviously having Eric out there is gonna be a huge help. He can shoot the ball like nobody else,” Harris said. “We just wanted to focus on us and coming together as a team especially in times when we don't have a full team, that's when we lean on each other the most.”

The Redhawks hit the road this weekend to face Purdue Fort Wayne at 12 p.m. on Saturday, Dec. 11 in Fort Wayne, Ind.