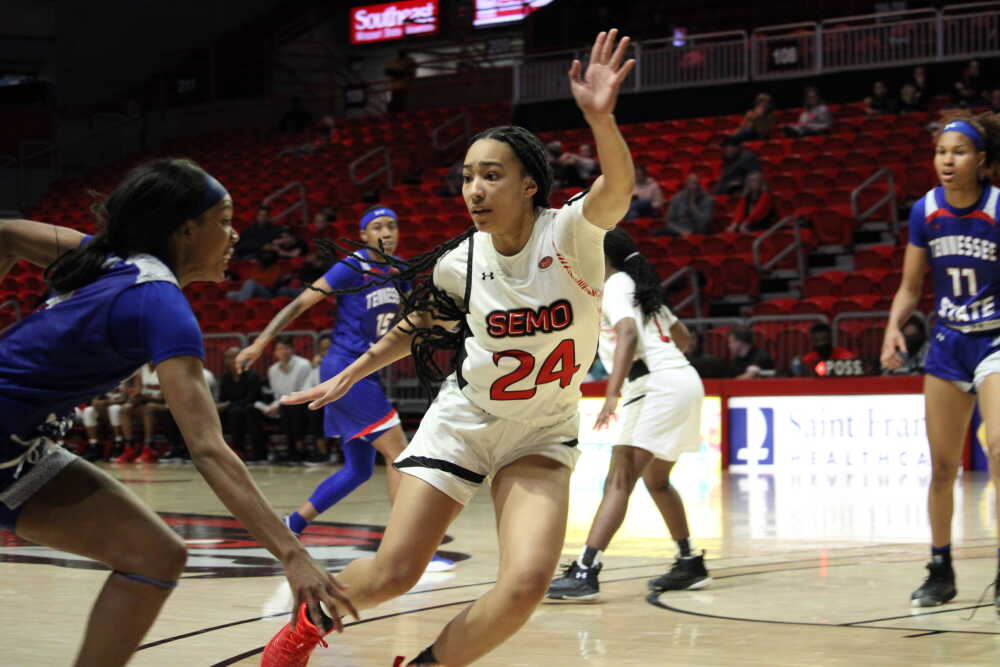 Freshman guard Jaliyah Green guards the ball during Southeast's 68-53 loss to Tennessee state on Jan. 20 at the Show Me Center in Cape Girardeau.
Photo by Alyssa Lunsford

SEMO women’s basketball opened the semester with a loss to Tennessee State University 68 - 53 on Thursday, Jan. 20 at the Show Me Center in Cape Girardeau.

The team was looking to finally put an end to their seven-game losing streak. Tennessee State finished a physical first quarter with 19 points. The Redhawks only managed to score eight points in the first quarter.

The Redhawks were missing junior guards Roshala Scott and Sophie Bussard. Head coach Rekha Patterson said it was difficult for the younger players to fill in the positions.

“It makes it difficult for these other kids to have to step into positions that we didn’t recruit them to step into so early,” Patterson said. “The kids are in uniform. They practice every day. They have fundamentals everyday and you've got to play the game.”

In the second and third quarters, the Redhawks’ offense wasn’t enough to ward off the Tennessee State defense. Going into the fourth quarter with a score of 56 - 31, the team continued to fight for a comeback. Freshman forward Halle Smith led the team with 14 points while freshman forward Kennedi Watkins collected nine rebounds.

This loss extended the Redhawks’ losing streak to eight games. Coach Patterson said she feels optimistic about the team despite the rough patch.

“I do believe in these young people and I do believe that if we keep working and if we continue to have a good attitude, that good stuff will happen,” Patterson said. “We talked to the girls and they were like ‘Coach can we still make the tournament?’ Absolutely we can make the tournament. We got to focus on how we need to play.”

The Redhawks will travel to Charleston, Ill. to face off against Eastern Illinois University on Jan. 22.