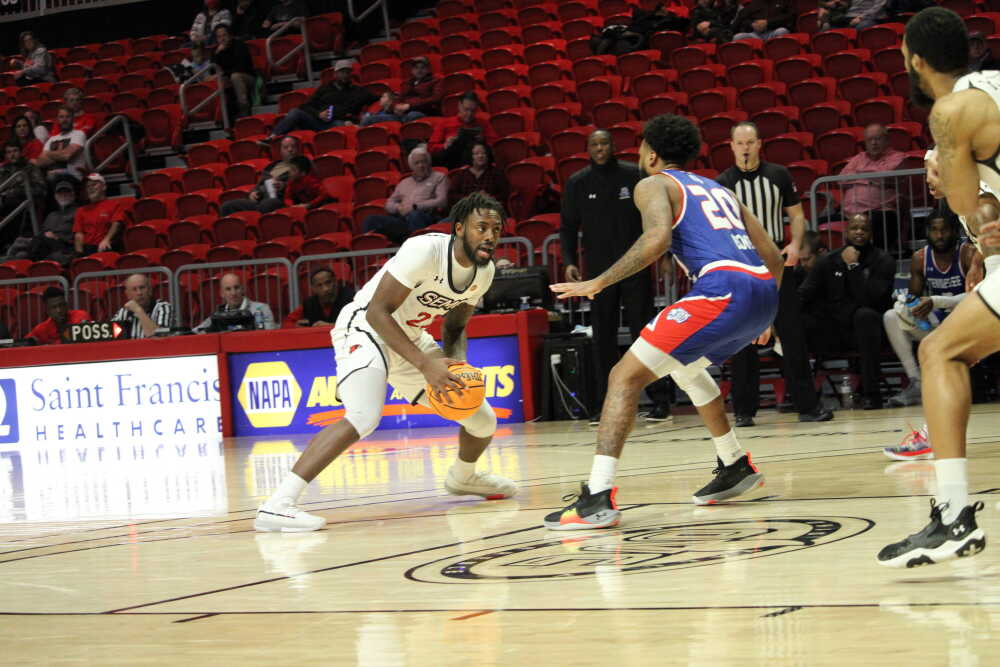 Redshirt junior guard Nana Akenten drives the lane during Southeast's 85-63 win over Tennessee State at the Show Me Center in Cape Girardeau.
Photo by Alyssa Lunsford

SEMO’s offense put on a show as everyone on the roster finished with at least three points. Redshirt junior guard Nana Akenten led the Redhawks scoring with 17 points. Junior guard Nygal Russell collected the most rebounds for the Redhawks with 14 in the winning effort.

Leading up to the match, Akenten said despite leading the team in scoring, he had not been performing as well as he was hoping.

“New year, new me,” Akenten said. “Credit to my team, my coaches, and the people in my corner for just staying with me and encouraging me. When you’re in a slump like that it is really easy to give up and be hard on yourself. But when you're surrounded by the right people, they feed into you and I kept that confidence throughout the whole thing.”

Thursday’s game was the first since student athletes’ return to school. Head Coach Brad Korn said his team is handling the transition well.

“You always do worry a little bit about that. Not just even that it’s just all the other distractions that come with being in college and students being back around.” Korn said. “If you don’t have that level of maturity to handle it, it would show any way that you play and it didn’t show in a way that we’ve played at home to this point. So I think our guys do a good job of balancing both.”

SEMO held onto the lead in the second half, with an early 16-point run and a 26-point increase from the paint. They capitalized on their strong defense and scored 19 points from turnovers. The Redhawks brought home their fifth-straight home victory 85 - 63.

The Redhawks will travel to Charleston, Ill. to face off against Eastern Illinois University on Saturday, Jan. 22.