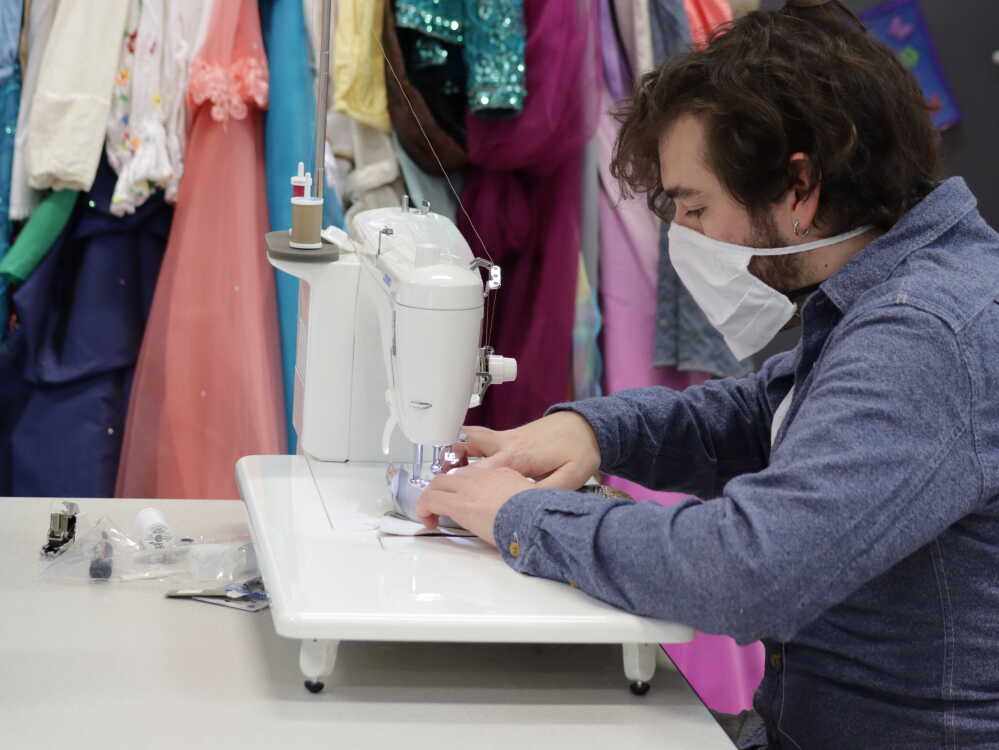 Adjunct instructor and costume designer Ben Streeter works on sewing a costume for the performance. A large amount of the costumes used in the performance will be handmade.
Photo by Nathan Gladden

Making an audience believe in magic for a night is no easy task, but Southeast’s River Campus is ready to take on the challenge. The Dobbins Conservatory of Theatre and Dance is presenting Rodgers and Hammerstein’s Cinderella at 7:30 p.m. from Feb. 16-19 and at 2 p.m. Feb. 20.

The musical is a Broadway adaptation of the classic tale of Cinderella — more specifically, Charles Perrualt’s “Cendrillon.” Cinderella, forced to work for her cruel stepmothers and stepsisters, is transformed by the fairy godmother on one fateful night, when she goes to the ball and meets her prince.

The cast and theater technicians are striving to perfect the details to convey the sense of wonder and magic the show is known for.

The show’s hair and costume design is heavily inspired by 1850s royalty. Junior Bachelor of Fine Arts technical theater and design major Cate Croghan is the hair and makeup designer for Cinderella and goes to great lengths to make sure her work is historically accurate and visually captivating, including her hairstyle design for one of the stepsisters.

“The stepmother tells her that her hair looks like a Bavarian pretzel. So for that hair design, it’s gonna be some sort of braid-y, twist-y, pretzel-esque looking thing,” Croghan said.

Many of the men in the ensemble will have mutton chop hairstyles with large sideburns that are reminiscent of styles from the 1800s.

“I feel like a lot of times, ensemble members can kind of fall out of the design realm, but really, they can be a really helpful part to force the eye into the world that the show’s going on in,” Croghan said. “And also, that kind of helps with giving more creative or fairytale freedom with the main characters. So, we can put glitter or whatever in the fairy godmother’s hair, and you can still know like, ‘OK, I understand that we’re still in the 1800s,’ because the ensemble all around has these specific hairstyles that relate to that.”

Croghan uses different hairstyles to convey different personalities, like giving the nicer stepsister a slicked back and neater hairstyle, and the evil stepsister a bigger, dramatized hairstyle. Changes to the characters that happen during the show also add to the magic. 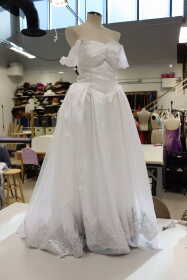 “To be able to start at the top of the show with something different and have that visual change happen onstage when they go through that transformation, I would say that’s a big part of the visual storytelling,” Croghan said.

“[I’ve] been making a little collection, and like a little toolbox, of different tics that she has, physically,” Parlor said. “There’s literally a line that says, ‘Forgive me if I stagger about and mutter,’ and it’s just like, that’s literally what she does for the entire time.”

Getting into the mind of the fairy godmother didn’t come easy for Parlor. Parlor said it’s almost like playing two characters at once: the wild, out-of-the-box “crazy Marie,” who turns into the poised, all-knowing fairy godmother.

“I learned I have to do some physical warmups and stuff like that in order to get grounded enough to act like a wild lady who’s on the street,” Parlor said. “She’s the fairy godmother and she’s playing the role of crazy, but like, she knows everything, she’s known everything, she just does it for fun.”

Parlor said the process of letting loose and playing the eccentric, intricate character of the fairy godmother has helped her intentionally seek out the magic of the show and give it to the audience. 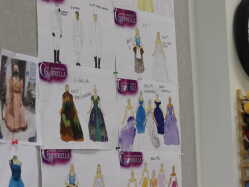 “When people watch [the show], they just want to feel that magic,” Parlor said. “That’s what it’s actually about, and that’s why we do it. We just try to share these experiences onstage, real or not real, so people can tap into their childhood and their sense of wonder.”

As a stage manager, Mary Cook, a senior Bachelor of Fine Arts in design and technology major, is responsible for taking detailed notes on the show and calling out all the cues for lights, sound and scenery changes. She is in communication with all the different departments and loves seeing how all of their work comes together.