Aluma Naughty: An artist and an art show 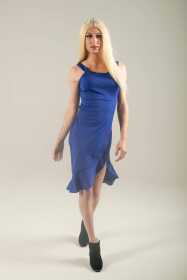 Kelly Spears — not to be confused with Britney Spears — grew up in Cape Girardeau and went to high school in New Madrid, where he lives now. Despite only being 19, he is already an up-and-coming drag name in the area.

The year 2020 was eventful for everyone: a global pandemic, quarantine and marches for George Floyd. But for Spears, this chaos became an era of metamorphosis.

Spears was heavily involved in the Cape community during this time, from working as a certified nursing assistant at Southeast hospital in the COVID-19 unit to being a representative on the Midwest Council for Civil Rights during the Black Lives Matter (BLM) marches. He participated in many community events with the Midwest Council for Civil Rights, from attending marches to handing out food and supplies.

It all started when Spears and his boyfriend at the time participated in Summer 2020 marches following George Floyd’s death.

Spears said they initially got involved when they met some people and started forming connections; from there, the group began to thrive. They met at different people’s houses and discussed answers to their questions: “What can we do? How can we bring awareness? How can we change what’s happening in our community?”

Spears said although he did not lead this group, he was very active in it, lending any help they needed.

“As a white person, I have privilege, so we can step back and give a helping hand, but we are going to let the Black people in our community step forward and lead, because this is their issue, and it’s affecting them,” Spears said.

The Midwest Council for Civil Rights worked hard that summer to spread awareness about police brutality, he said. But Spears’ involvement in his community and his experience with struggle did not end there. As a Certified Nursing Assistant (CNA) in the COVID-19 unit, Spears experienced his fair share of loss.

“There was this guy in the unit [at the hospital], and he was super nice and bought us pizza,” Spears said. “Then, just a few days later, I found out he had died — from COVID.” 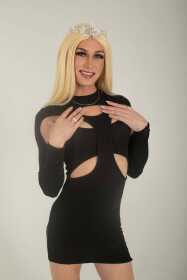 Kelly Spears appears in drag as Aluma Naughty in a portrait photo. The name originated in Spears' interest in conspiracy theories.
Photo by Kaylie Davis

After the Midwest Council for Civil Rights dismantled and Spears left Southeast, he found himself in need of a new passion — one that could focus more on his talents rather than his altruism. Spears credits the painful events of 2020 as the spark that ignited his interest in drag.

“I got into [drag] after I left [Southeast], because I wasn’t staying busy, you know?” Spears said. “And I was like, ‘Damn, what can I do to put my passion through?’ … It really started as a hobby.”

But he said there were several other reasons why he became interested in drag. In high school, Spears was a quiet kid and loved to dance, lip sync and draw. Spears was in several art classes in high school, and he believes this may be why the makeup portion of drag comes so easy to him. He worked at Sally Beauty and Eden Health Spa and Salon this past year, where he learned a lot about makeup and hair. Watching shows like “Pose” or “RuPaul’s Drag Race” also helped him find his talent at art in this community.

Although these experiences helped him define his hidden talent, it was the people closest to Spears that he said get the credit. Spears said his sisters played a major role, because they all love to play with makeup; because of their similar face shape, it was easier for Spears to learn how to apply makeup properly. He says he has a supportive family that encourages him to be creative.

His friend Christy Mershon, Director of the Engagement Center at SEMO, has helped him the most. His honorary “drag mother” gave him her old makeup, dresses and shoes. Mershon was also responsible for the name Aluma Naughty, the drag personality Spears embodies. Because of his love for conspiracy theories, Mershon and Spears came up with the alias as a nod to one of the biggest conspiracy theories: the Illuminati. Spears said the “naughty” adds to the fun of the character — it’s all about the mystery.

Spears now lives at home in New Madrid, taking care of his three younger sisters. He plans to keep doing drag locally, as well as making TikToks. He said he’s enjoyed the bonds he has made with the drag queens at Independence Place, and he looks up to them.

“Because of everything I’ve experienced, I appreciate life more. Drag is more than the glitz and the glam. It’s a sisterhood,” Spears said.

Follow Aluma Naughty on Instagram or TikTok, or attend her next performance on Feb. 11 at Alt Universe in Poplar Bluff.