Southeast Missouri State University’s Black Student Union (BSU) hosted a “The 1st to Ever Do It” Jeopardy event in Dempster Hall on Wednesday, Feb. 9. This was BSU’s first of many planned events for the month of February.

The categories for Jeopardy included pop culture, history, music, movies and others. Each question was worth 100 to 500 points, and the final Jeapardy question was,“When was the first Black slave brought to America?” The winners of the event were given a goodie bag of candy.

BSU President Neosha Smith said she and the organization wanted to do the event because “not many people know a lot about Black history.” 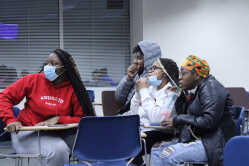 Members of “We Wuz KANGZ” wait to answer the jeopardy question “Who was the first Black woman to be Miss America?”
Photo by Amari Bell

“We wanted to create something where people know about the Black men and women, and how they are still making impacts in the world today,” Smith said. “Not just Malcolm X or Martin Luther King, but other not so known historical figures.”

Smith said the event was also a tie-in with their informational poster in the University Center. The name of the poster is “The First Black People To…” It is hanging just outside of Starbucks and introduces a new historical Black figure everyday.

For Jeopardy, participants were split into groups of three to five people to answer questions. One example of a question asked was, “Who was the first Black woman to win the Tennis Open?” Teams had 30 seconds to answer before their turn was over.

The team's got to choose their own names. The participating teams' names were “Zoom,” “We are the Baddest (And is),” “Wakanda,” “We Wuz KANGZ” and “GBP.”

Team “We Wuz KANGZ” won the Jeopardy questions with a total of 3,000 points.

Camille Shoals, member of the “We Wuz KANGZ” team, said she chose the team name because of the historical significance and a meme she saw with Pink Panther wearing a traditional Kufi cap with the caption “We Wuz KANGZ.”

“In the Black community, there is something known as a “Hotep.” It is a Black man whose views are extreme leftist and radical. He believes in Black liberation and realization. It is similar to the Black Panther Movement,” Shoals said.

Shoals said she enjoyed the event because it showcased how united the Black community on SEMO’s campus is.

“Black Student Union is not just for Black students, it is for any race and ethnicity. BSU is a safe space for anyone who wants to be a part of it.” Smith said.

BSU and SEMO’s Association for Black Journalists will co-host an open forum called “For the Culture” on Wednesday, Feb 16. Stay updated on BSU and their events here.