How SEMO warmed to Wordle 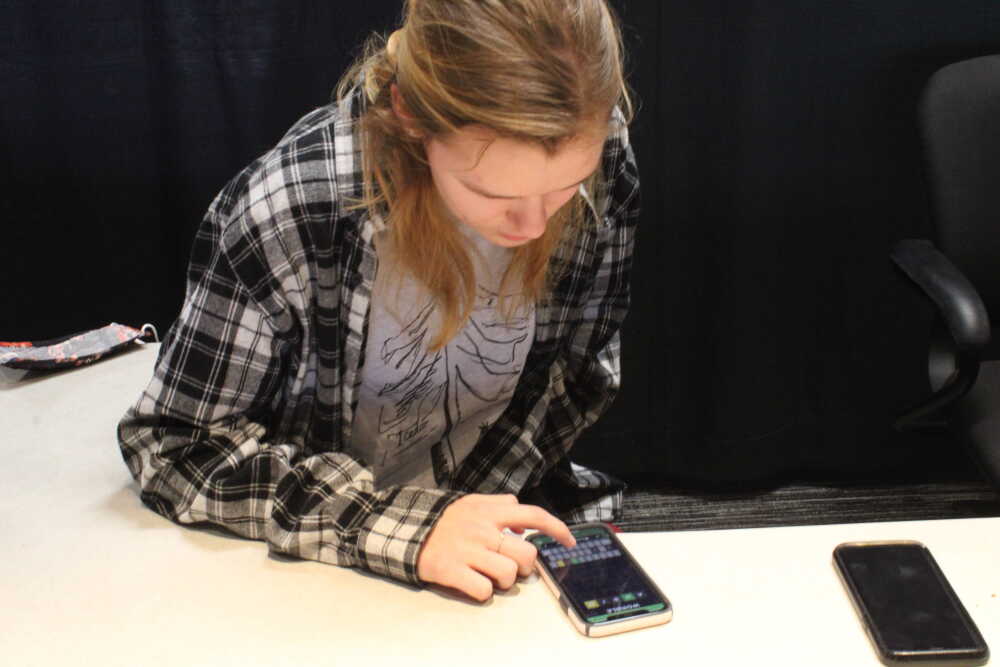 Mass media senior Emma Goodrick puzzles over the answer to today's game. She said "Everybody I've talked to has a different way to play it."
Photo by Matt Morey

The first rule of Wordle is you don’t talk about Wordle.

“I was scrolling on Twitter, and someone in England had posted it to gripe about it,” associate professor of English James Brubaker said, “Because they had a different spelling of ‘humor’ over there.”

Or, rather, you talk about it to everyone you know, but you don’t spoil the answer.

The five-letter puzzle game, created by a computer programmer for him and his partner, according to the New York Times, jumped from a few dozen players to several thousand in just a couple months.

You might have seen the grid of gray (or grey), yellow and green square emojis on your social media feed. It has caught on as part of a daily routine for students, faculty and staff at SEMO as a deeply social experience.

Management instructor Lori Mueller, who has enjoyed puzzle games since childhood, said she first saw one of her friends post scores on social media a few weeks ago, with eventually more to follow suit.

“I guess I better go see what it is,” she said, “so at least I can know what they’re talking about.”

Wordle is a guessing game that is like Hangman, where a player gets six attempts to guess what a five-letter word is. It is played by going to its website nytimes.com/games/wordle/index.html. Or, you can google “wordle,” which now transforms the logo to a Wordle theme.

Displayed is a grid of blank white squares amidst a white background with a keyboard at the bottom.

“People like it because it’s simple, yet complex,” psychology sophomore Connor McElwee suggested.

All you can do is fill the top row with letters, then hit the enter key.

When the top row fills with your first word, some letters will have a gray box, which means they are not in the answer; some boxes will be yellow — the letter is in another spot — and some will be green, which means it’s the right spot.

If all of the letters are green, you win. If not, you lose. But either way, a “share” function will use emojis to post the colors of your grid on social media. 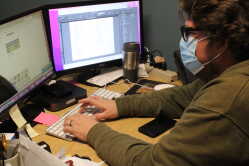 Associate professor of English James Brubaker said he starts each Wordle with something that is on his mind. "Last night I started with 'skate' because I was watching the Olympics."
Photo by Matt Morey

“You share your process but not the word you use,” McElwee said. He said it is taboo to share the answer.

Mueller said Wordle naturally attracts people who like word games, but people also use it to socialize.

Mueller said she has friends who post their scores every day.

She said she might see a friend’s post and think, “OK, it took me four, how did you get it in two?” and then comment with her score.

“It’s a way to start a conversation about something we all have in common,” she said.

Another reason it has caught on is, paradoxically, that you can only play it once a day.

“It creates an anticipation,” political science senior Tyler Styrsky said, “because after you get one right, you want to keep playing.” He says plays it in the morning to jog his mind.

McElwee, who plays the game with his girlfriend at midnight when the new puzzle drops, said of the delay mechanic, “This is a feature, not a bug.”

He said it makes winning feel good, and that even then, “There are various levels of winning,” like in the difference between two turns and six turns.

“With a lot of games, you can play it all night long,” mass media senior Emma Goodrick said. “You’ll have a good time, but you’re not really excited about it.”

She said a puzzle that drops once a day can be integrated into a routine.

Brubaker compared it to television. He once tried a Wordle knock-off that searched through words from the archive and played three games for around 10 minutes.

He said shows like “Lost” generated conversation and imagination in the vacuum of their off-seasons, and now you can watch a show in six hours, “and then you never think about it again.”

“It’s kind of similar with Wordle,” he said. “It’s this small, manageable, interesting task you can accomplish and wait until the next day to do the next one.”

Since the New York Times purchased the game in January, some have wondered if it will lose its sheen.

Cybersecurity graduate Will Kasson, who plays the game with SEMO Game Club, said, “I just don't want it to be behind a paywall. It's such a simple game, that it's just one time per day. I feel like you don't need to make it behind a paywall.”

“This game changed my life,” he said, then laughed. “That’s what my girlfriend told me to say.”

Mueller said if you lose Wordle, then there’s no going back.

Maybe Wordle won’t change your life, but in a world of busy schedules and games more focused on advertising to you, it allows players to pause and then interact, if just for just a few minutes.