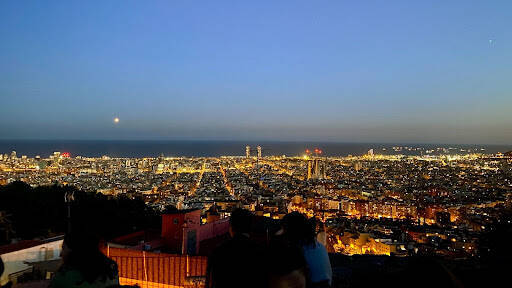 The view of Barcelona from the top of El Carmel mountain right after sunset.
Photo by Molly Phegley

Whewww… let’s talk about culture shock and its effects on your self confidence!

Self confidence was not something I had ever considered when preparing for this experience. Of course I knew there would be a huge culture shock for me, but every day I’m finding that it comes in waves — and in many different forms.

I think we all know that America has a reputation. Whether you love our country or not, you have to understand that other cultures in this world have been affected by our political and social actions.

Sitting in a classroom full of students when you are the only American can be very intimidating. There are many preconceived judgments about what the average “American” is like. Not all are negative, but I have definitely heard the terms “entitled,” “self-centered,” and last but not least… “lazy.”

Not to mention, the first class I attended in Spain was my International Negotiation class. On the first day, we spoke about culture in other countries and how they differ from your own. For some reason, Americans were the butt of most jokes throughout the entire class period.

I think one of the biggest takeaways when studying or living abroad is to understand that you cannot take things personally. At first, it was hard for me to adjust to the fact that American mannerisms and behaviors do not necessarily have the same value in other countries, but that comes with any kind of culture change.

You really have to understand and respect the expectations of other cultures if you decide to live in their country. Sometimes it takes trial and error. Sometimes you accidentally live up to the reputation.

It is not because you fit under these judgements. It’s because people were raised to have different social expectations. To an American, something may seem like the correct thing to do; to a European, it may seem rude and disrespectful.

It’s a challenge to learn that these opinions are just stereotypes and not aimed at your personal character. These preconceived ideas of your own culture are not definitive of who you are.

For the first time in my life, I am a minority. Being a middle-class white woman has put me in the position of never really encountering this feeling before, but I believe it is something every person with privilege should experience in their lifetime.

However, I will never be able to truly understand because, at the end of the day, I have the prerogative to go back home where I am no longer considered a minority.

The study abroad program is a wonderfully eye-opening adventure that SEMO provides. It allows for you to appreciate that the world is so much bigger than you. You can experience the feeling of being an outcast and learn to navigate a world that is so much different than the one you know.

While this may sound scary — and it definitely is for the first week or two — it is something that will mold you into a more understanding and well-rounded person. To truly face the world on my own is a blessing incomparable to anything I’ve experienced before.

Living under the standards of a completely different culture feels vulnerable and intimidating. My self confidence plummeted very quickly when I first arrived here.

I often felt so tiny, yet so exposed. I felt like every person around me could tell that I am not from here. I felt like I was on display, and it was because I was taking everything so personally.

I had all of these sensitivities, and they often became very overwhelming. I know that I am not the first person to ever feel this way, but it gave rise to undeniable empathy for actual minorities who are forced into these feelings by others every day of their life.

Facing and overcoming these feelings has renewed a sense of self assurance within myself. I had to fake my own confidence every single day, and slowly it manifested into real confidence. Although I don’t know what I’m doing a majority of the time, I am finding my way through, and to me that is something to be very proud of.