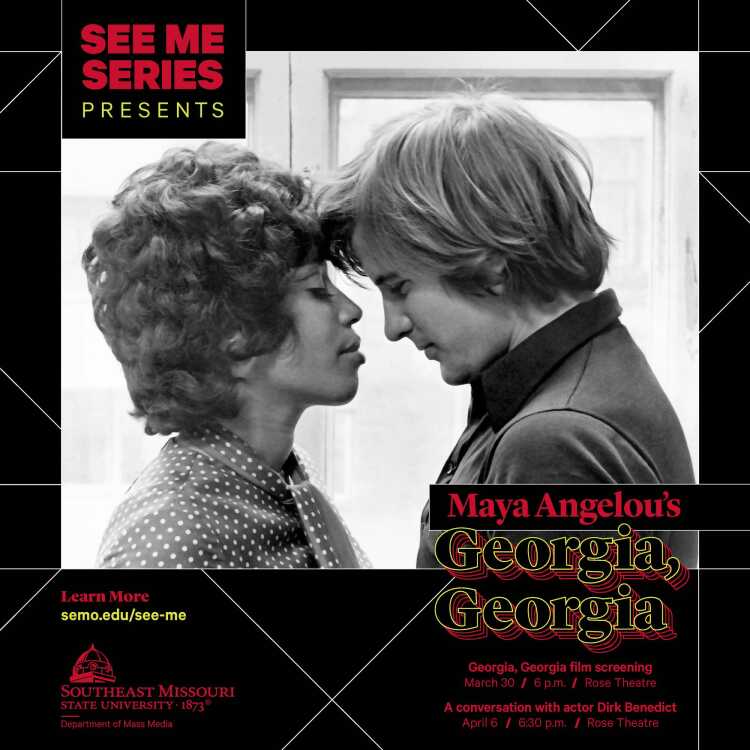 The screening of "Georgia, Georgia" on March 30 is part of the "See Me Series" created by mass media professor, Karie Hollerbach. The series is meant to highlight diverse creative media works and generate discussions in classrooms across SEMO's campus with multiple departments.
Graphic submitted by Karie Hollerbach

SEMO mass media professor Karie Hollerbach stumbled across the film “Georgia, Georgia” during summer break through a social media post. Now, she is showing the film on the big screen to SEMO students at 6 p.m. on March 30 in Rose Theater. The film is part of the "See Me Series," an initiative with the goal of exploring diverse creative work and talking about it in classrooms.

The title of the film “Georgia, Georgia” is based on the celebrity singer character’s name, Georgia Martin, played by Diana Sands. The film was shot in Sweden and followed the character Martin's perspective as a Black celebrity singer performing in Stockholm who falls in love with a white American photographer in the 70s.

“I reached out to my colleagues about this film, and they all had the same reaction I had, so I thought, ‘What could we do with this film?’ I could show it in my media history class, but I felt like it needed a much bigger audience than that,” Hollerbach said. “That’s when I thought, ‘Why don't we screen this film to the entire campus in the Spring of 2022, because it would be the 50th anniversary of the release of the film, and then bring in someone who was part of the filmmaking process?’”

Actor Dirk Benedict who played Michael Winters, the white American photographer, in the film is the only star from “Georgia, Georgia” still living today. Benedict will visit SEMO one week after the initial screening of the film at 6 p.m. March 30. The conversation with Benedict will begin at 6:30 p.m. on April 6 in Rose Theater.

Not only will this film be screened on-campus, but it is also being discussed in 23 classes at SEMO this semester. Some of the classes include history, communication disorders and mass media departments.

Samantha Washington is an assistant professor in the Department of Communication Disorders. Her classes will watch “Georgia, Georgia” to help show how explicit and implicit bias were used in this film. Washington said the film shows many explicit and implicit biases people still struggle with today, but the film also shows things society has improved upon throughout the years.

“When I’m teaching explicit bias and implicit bias and how it impacts service delivery, my students can see in this film how it has been a historical issue in our society,” Washington said. “They can also see how many things have also progressed that we accept. For example, the LGBTQ [community]; in the film, you hear many negative comments about it, when now, we are more accepting of those relationships.”

Professor of history and anthropology Joel Rhodes will also show the film in his classes, as it shows many historical events from the ‘60s.

“As a historian, I’m interested in how this film continues on the conversations of race and war in the ‘60s in more of a domestic place,” Rhodes said.

For more information, read about the series and film on the Southeast website, and watch the video created by University Marketing.