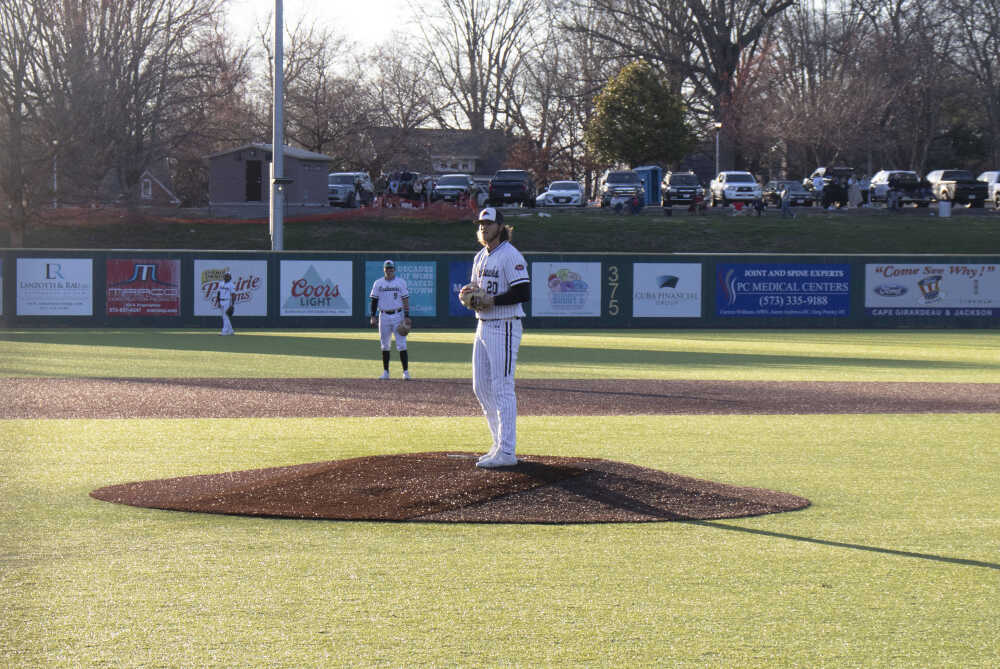 The Redhawks baseball team swept the SIUe Cougars in a three-game weekend series on March 27 at Capaha Field.

Senior Redhawks pitcher Jason Rackers was given the nod to start on the mound for game one of the series on Friday. No team would cross the plate until the fifth inning when the Redhawks scored two runs off a double by sophomore second-baseman Ben Palmer. This would be the only hit for the Redhawks in the game as junior outfielder Joel Vaske was hit by a pitch and sophomore designated hitter Ty Stauss was walked prior to Palmer’s at-bat.

The Redhawks would bring sophomore pitcher Kyle Miller in for Rackers in the seventh inning. Miller kept the Cougars at one run in that inning and eventually the game as Southeast Missouri went on to win game one with a final score of 2-1.

Junior pitcher Noah Niznik started on the mound for game two. The Cougars got off to a quick start as they scored one run in the top of the first inning. The Redhawks were held back until the sixth inning when senior shortstop Tyler Wilber repeated history as an RBI double was hit to score two runs to give the Redhawks the lead. The batters before them were put on base via hit-by-pitch and walked.

Senior pitcher Austin Williams was put in for junior pitcher Hunter Ralls who replaced Niznik in the fifth inning. Williams would finish off the Cougars to collect the save, a 2-1 victory for the Redhawks and a series clinch.

Game three saw junior pitcher Tommy Windt on the mound to start off the final game of the series. SIUe would get on the board first in the third inning with a solo home run to left field to give the Cougars the lead. The lead would stick around for long as Palmer would crush a two-run home run to left field to steal the lead right back. The Cougars would immediately tie the game back up with an RBI single. Junior pitcher Blake Cisneros replaced Windt in the third.

The Redhawks would regain the lead in the seventh inning as Palmer was hit by a pitch with the bases loaded to make it a 3-2 ballgame. The final nail in the coffin for the Cougars happened in the either inning as junior catcher Andrew Keck hit a two-run home run to right field to give the Redhawks a 5-2 lead. Kyle Miller would stay for the ninth inning and finish off SIUe and complete the sweep with the final score of 5-2.

With this sweep the Redhawks are undefeated at home with a record of 13-0.

Redhawks head coach Andy Sawyers said he was proud of his team and gives credit to the bullpen for their performance as well.

“I’m really proud of the kids and how they play,” Sawyers said. “I thought one thing that stood out to me was how good our bullpen was.”

Coach Sawyers said the bullpen’s performance this weekend was what made the difference.

“Heck of a performance by our bullpen this weekend. I thought that was a difference in the series,” Sawyers said.

The Redhawks pitching collected 18 strikeouts across the entire weekend series.

The Redhawks will travel to St. Louis, Missouri to take on the Saint Louis University Billikens on Tuesday, March 29.