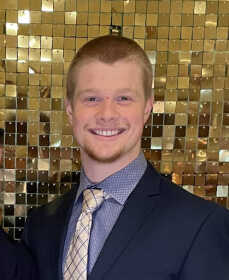 Southeast student Will Ward said he is now flourishing since he has re-established his relationship with Christ. He is heavily involved in Campus Outreach and working toward the goal of graduating in May.
Photo submitted by Will Ward

Southeast senior and cybersecurity major Will Ward grew up in a Christian household with parents who took him to church every Sunday. When Ward left for college, he said he kept his Christian faith in mind. As he joined SEMO's campus, though, he would find that his faith would be questioned due to choices that would not align with the belief.

Ward said he was looking forward to indulging in the many activities often associated with the college experience.

”When I came to SEMO, I came in with a lot of excitement for partying and the opportunity to indulge in all sorts of things that the fraternity life has to offer,” he said.

Ward joined the fraternity Pi Kappa Alpha during his freshman year of college. During this time, he said he was given the perfect outlet to heighten his intensity of drinking, partying and pursuing women. He said he soon learned how these activities began to affect himself and those he loved.

“My personality when I'm sober is just very outgoing, energized … I like to have fun and enjoy times with my friends, so when I would drink, I would think that would increase those qualities,” Ward said. “We would have a good time, but what it really did was turn me into a person that I just really did not want to be.”

Ward did not realize this while under the influence of alcohol. He said he needed friends to inform him about his behavior during the previous night for the events and his behavior to fully register.

“Afterwards, I would talk to my friends, and they would tell me things that I said or did that just did not sound like the man that I want to be,” Ward said. “It brought me a lot of distress, because I would treat my friends badly, and I wouldn’t even remember doing it.”

Ward said he often found himself replaying his weekend’s events, wondering who he may have potentially hurt, upset or treated poorly.

Ward said the depressive state caused by his lifestyle led him to question the validity of calling himself a Christian.

Amidst all of this, Ward formed a closer bond with a few of his fraternity brothers who were a part of the campus ministry Campus Outreach. Ward began attending Bible studies and allowed himself to hear what others said about Christianity.

“Slowly but surely, while I was living my life how I wanted to, I could see that [myself and my fraternity brothers’ who also attended Campus Outreach] lives looked nothing the same, even though we are all supposed to all be Christians. It really started to weigh on my heart that I may not have even been a Christian,” Ward said.

Along with the Bible study, Ward began to regularly attend other Campus Outreach events such as “828”, a weekly event held by the ministry intended for students to meet each other, have fun and expand their knowledge of Christianity.

“It’s really just given me a community of men and women that prioritize following Christ over all things, and that’s allowed me to go to them with things that I’m struggling with,” Ward said.

Ward was granted the opportunity to see the ministry change his life and many others’ lives, including the life of his best friend of more than nine years.

“We both came into college living a similar lifestyle. I came to know the Lord, and what I wanted was to see my best friend to quit searching for happiness in things that were destroying both me and him,” Ward said. “So, I shared with him, and he is now living his life for Christ, as well. Not only have I seen it change my life, but I’ve seen it change the life of my best friend and many other guys and girls.”

Ward said the advice he would offer people who may be facing similar struggles he once did is to not look to the world to fill any void.

“This world has nothing to offer to satisfy you fully. One way or another, you're going to try and find ways to satisfy yourself, and you’ll waste your entire life trying to find happiness that this world cannot offer you,” Ward said. “You must look to Christ and a relationship with Him to find satisfaction and peace.”

Ward is hoping to pursue endeavors in ministry following his graduation from Southeast.

For more information on Campus Outreach, visit their Instagram for details on involvement and upcoming events.