Redhawks hang on for the victory against the Red Wolves 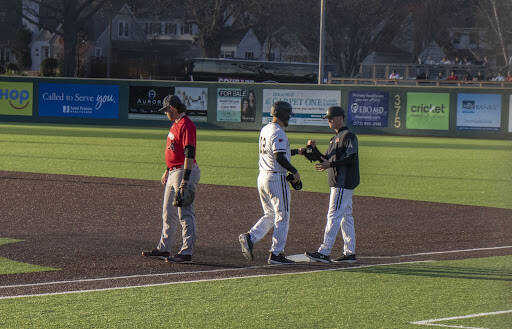 Junior catcher Andrew Keck gets to first base after a walk during Southeast’s series over SIUE on March 25 at Capaha Field.
Photo by Kaylie Davis

The Southeast Missouri State Redhawks defeated the Arkansas State Red Wolves by the score of 8-5 Tuesday, April 5 at Capaha Park.

The game began in a pitching duel with junior Bryce Grossius getting the start for the Redhawks. Grossius navigated out of a bases loaded jam in the first inning with a double play ball that swung the momentum in the Redhawks direction early.

Head coach Andy Sawyers was impressed by the way Grossius threw tonight and credits the inning-ending double play in the first inning to be a game-changer.

“One of the biggest moments in the game actually was the bases loaded inning-ending double play in the first to get us off the field. I thought that was a big moment,” Sawyers said.

Grossius would finish his night with four scoreless innings, allowing four hits and striking out three. He kept his team in the game as the offense struggled the first time through the lineup.

“I just went out there and tried to keep the ball down best I could, do my thing and not try to do too much, just collect outs whenever they were presented to us,” Grossius said.

Junior outfielder Jevon Mason broke the scoreless tie with a two-run home run in the third inning. One batter later third baseman Peyton Leeper followed with a solo shot of his own that gave SEMO a quick 3-0 lead.

Mason continued to impact the Redhawks lineup as he was on base three times tonight and helped spark the offense in the middle innings.

“I’m just not trying to do too much, we’ve been getting caught trying to get too big because we’ve had a lot of success with the deep ball. We’re just trying to get the barrel on the ball,” Mason said.

Sawyers once again had high praise for Mason, calling him his “version of Ricky Henderson” because he can beat you with his power as well as with his legs.

The bullpen for the Redhawks held up for most of the game until letting up four runs in the sixth inning and then eventually allowing Arkansas State to tie the game at five in the top of the seventh inning.

It was in the home half of the seventh that the Redhawks regained the lead after center fielder Brett Graber cleared the bases with a three-run triple that proved to be the winning run in the contest.

SEMO once again got late game offense to help fuel them to victory, but Coach Sawyers said the key to their late game success has been the bullpen.

After taking the lead back it was smooth sailing as the bullpen continued to dominate. Sophomore Kyle Miller came on in the ninth inning and had a nine pitch inning to shut the door on the Red Wolves, while recording his sixth save of the season.

This win pushes their overall record to 20-7 on the year and 4-2 in conference play. They have now won 15 straight games at home and they look to extend the streak as they welcome in the Murray State Racers for a three game series this weekend.